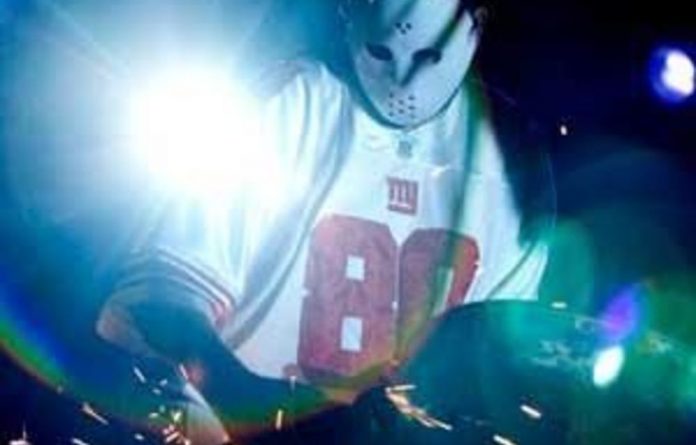 The singer and visual artist had collapsed and been admitted to hospital a week earlier, suffering from liver and kidney failure.

At the time, Battery9’s front man Paul Riekert told Channel24 that he believed that Burger’s lifestyle had contributed to his health issues. “I told him he abuses alcohol and it will take everything away from him. His friends, relationships, his health.”

Sondag‘s music writer Angola Nel described Burger as “a genius and the most innovative person that I know in the local music scene”.

The 6’8″ Burger and Riekert were the only two founding members of Battery9 that had remained in the band since 1995. The band is acclaimed for their innovative use of non-traditional instruments, inspired by industrial bands such as Einstürzende Neubauten, including scrap metal, hammers and angle grinders.

In an interview with the Mail & Guardian‘s Lloyd Gedye back in 2007, Adriaan Pelzer, frontman of fellow experimental Afrikaans band NuL, talked about their place in South Africa’s musical landscape. “I think they opened the South African [and especially Afrikaans] music scene to a lot of variety by establishing a boundary quite far out, thus opening a lot of creative potential between what they did and the norm.”

Burger had also worked with other bands and projects, including KOBUS! And Hoenderman, and DJed under the name DJ Fokolnonsens.

The M&G‘s music writer, Lloyd Gedye, had this to say: “As a longtime fan of Battery9 from my youth, it was an eye-opening experience meeting Husyer Burger when I first moved to Johannesburg.

“Here was this icon of South African music, this great artist and this pioneer of Afrikaans hip-hop and I was sitting drinking a beer with him. I got on immediately with the great hulk of a man.

“Huyser was a very smart guy, had a wicked sense of humour and was a good friend to me. However he was always a troubled soul and lived his life like no one else I knew. He lived completely on the edge, often infuriating his friends who had to sit by and watch his tragic battles with substance abuse. All I know now for sure is that I will miss him and so will the South African music industry. My thoughts go out to his family and all his friends.”

The world is a confusing, crazy place. Especially if you are a cat, apparently.
Read more
Friday

Confusion over early bird ticket sales have left many fans frustrated and worried that they could miss out on the tickets they want.
Read more
Friday

The Labia Theatre in Cape Town has come under fire from the Right2Know campaign after cancelling a screening of "Roadmap to Apartheid".
Read more
Advertising
Continue to the category
Politics