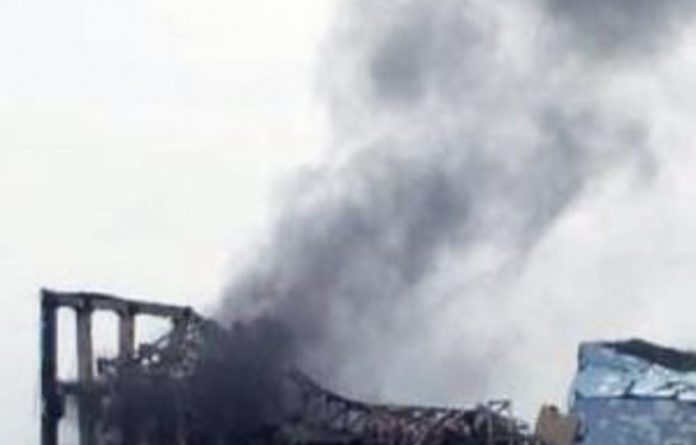 Large quantities of highly radioactive water have leaked through a crack in the wall of a treatment facility at the Fukushima power plant and some may have found its way into the sea, the plant’s operator, Tokyo Electric Power [Tepco], said on Monday.

The firm said as much as 45-tonnes of water had leaked through a crack in the concrete wall of a building being used to purify contaminated water that is then used to cool molten fuel in the plant’s three damaged reactors.

The firm has piled up sandbags to prevent further leaks but fears that some water may have already found its way into a gutter that connects to the Pacific Ocean about 600m away.

Experts believe the water could contain high levels of strontium, a beta-emitting radioactive substance that, if ingested, can cause bone cancer.

Public broadcaster NHK reported that although caesium levels in the leaked water were low, it could contain up to 130 000 becquerels per cubic centimetre of strontium, which has a half-life of 29 years.

Contaminated water
Workers temporarily halted the purification apparatus after spotting a puddle of water on Sunday. They later recorded 1.8-millisieverts [mSv] per hour of gamma radiation and 110 mSv per hour of beta radiation on the surface of the puddle, the company said in a statement.

It said the leak appeared to have been stemmed, adding that it already had enough purified water to continue cooling the reactors as scheduled.

The discovery underlines the difficulties facing Fukushima Daiichi workers as they struggle to contain and re-use large volumes of contaminated water.

In October, the Institute for Radiological Protection and Nuclear Safety, a French government body, said the plant had been responsible for the biggest-ever discharge of radioactive material into the sea.

More details have emerged, meanwhile, of the workers’ desperate struggle to save the power plant in the moments after it was struck by a tsunami of up to 14m in height on the afternoon of March 11.

One of the unnamed employees, who was in charge of the main control room at the time of the disaster, recalled how at one point he had begged colleagues not to abandon the plant.

‘Begged them to stay’
He realised that the tsunami had caused a disaster when the lights on the plant’s control panels flickered and then went out. “I came to realise that a tsunami had hit the site when one of the workers came rushing into the control room, shouting ‘Sea water is gushing in!'” he said. “I felt at a complete loss after the power went down.”

He said that the plant’s “anxious” employees argued over how to contain the crisis with one suggesting they had no choice but to flee. “He said: ‘Is there any point in staying when there is nothing we can do?’

“I bowed my head and begged them to stay.”

Workers at the site in the aftermath of the accident — quickly nicknamed the Fukushima 50 because they initially worked in groups of around that number — have been hailed as heroes for remaining at their posts and preventing an even greater catastrophe.

One recalled how he had volunteered to enter a reactor building to manually open a ventilation valve in an attempt to ease the pressure building inside.

‘My black rubber boots melted’
“We put on full protective gear but we couldn’t possibly let younger workers do that job as we were entering an area with high levels of radiation,” he said.

“When I got there, I heard a strange, loud popping sound from below and when I tried to start work, my black rubber boots melted [due to the heat].”

The workers echoed fears voiced recently by the plant’s chief, Masao Yoshida, who has taken early retirement due to an unspecified illness, that there were moments when they believed they would die.

“We experienced big aftershocks and had to keep fleeing [from possible tsunami] up the hill still wearing our protective masks,” said one worker.

Another recalled how he and his colleagues constantly worried about being electrocuted as they worked while standing in puddles of water. —