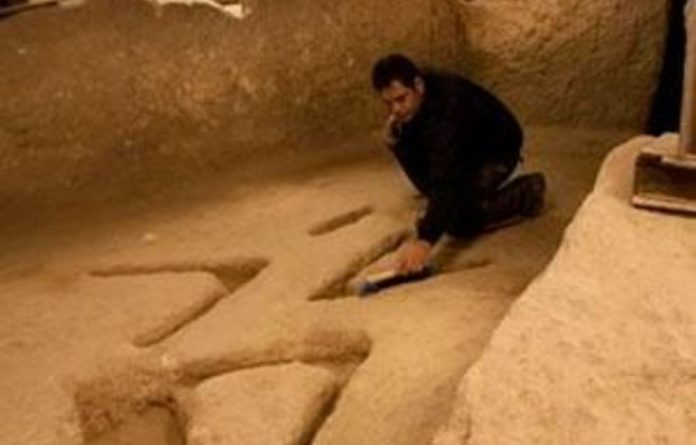 Mysterious stone carvings made thousands of years ago and recently uncovered in an excavation underneath Jerusalem have archaeologists stumped.

Israeli diggers who uncovered a complex of rooms carved into the bedrock in the oldest section of the city recently found the markings: Three “V” shapes cut next to each other into the limestone floor of one of the rooms, about 5cm deep and 50cm long. There were no finds to offer any clues pointing to the identity of who made them or what purpose they served.

The archaeologists in charge of the dig know so little that they have been unable even to posit a theory about their nature, said Eli Shukron, one of the two directors of the dig.

“The markings are very strange and very intriguing. I’ve never seen anything like them,” Shukron said.

The shapes were found in a dig known as the City of David, a politically sensitive excavation conducted by Israeli government archaeologists and funded by a nationalist Jewish group under the Palestinian neighbourhood of Silwan in east Jerusalem. The rooms were unearthed as part of the excavation of fortifications around the ancient city’s only natural water source, the Gihon spring.

Ritual function
It is possible, the dig’s archaeologists say, that when the markings were made at least 2 800 years ago the shapes might have accommodated some kind of wooden structure that stood inside them, or they might have served some other purpose on their own. They might have had a ritual function or one that was entirely mundane.

Archaeologists faced by a curious artefact can usually at least venture a guess about its nature but in this case no one, including outside experts consulted by Shukron and the dig’s co-director, archaeologists with decades of experience between them, has any idea.

There appears to be at least one other ancient marking of the same type at the site. A century-old map of an expedition led by the British explorer Montague Parker, who searched for the lost treasures of the Jewish Temple in Jerusalem between 1909 and 1911, includes the shape of a “V” drawn in an underground channel not far away. Modern archaeologists haven’t excavated that area yet.

Ceramic shards found in the rooms indicate they were last used around 800BC, with Jerusalem under the rule of Judean kings, the dig’s archaeologists say. At around that time, the rooms appear to have been filled with rubble to support the construction of a defensive wall.

It is unclear, however, whether they were built in the time of those kings or centuries earlier by the Canaanite residents who predated them.

Devoted religious practice
The purpose of the complex is part of the riddle. The straight lines of its walls and level floors are evidence of careful engineering and it was located close to the most important site in the city, the spring, suggesting it might have had an important function.

A unique find in a room beside the one with the markings — a stone like a modern grave marker, which was left upright when the room was filled in — might offer a clue.

Such stones were used in the ancient Middle East as a focal point for ritual or a memorial for dead ancestors, the archaeologists say, and it is likely a remnant of the pagan religions which the city’s Israelite prophets tried to eradicate.

It is the first such stone to be found intact in Jerusalem excavations.

But the ritual stone does not necessarily mean the whole complex was a temple. It might simply have marked a corner devoted to religious practice in a building whose purpose was commonplace.

Thought-provoking
With the experts unable to come up with a theory about the markings, the City of David dig posted a photo on its Facebook page and solicited suggestions.

The results ranged from the thought-provoking — “a system for wood panels that held some other item” or moulds into which molten metal would could have been poured — to the fanciful: ancient Hebrew or Egyptian characters, or a “symbol for water, particularly as it was near a spring.”

The City of David dig, where the carvings were found, is the most high profile and politically contentious excavation in the Holy Land. Named for the biblical monarch thought to have ruled from the spot 3 000 years ago, the dig is located in what today is east Jerusalem, which was captured by Israel in 1967. Palestinians claim that part of the city as the capital of a future state.

The dig is funded by Elad, an organisation affiliated with the Israeli settlement movement. The group also moves Jewish families into the neighbourhood and elsewhere in east Jerusalem in an attempt to render impossible any division of the city in a future peace deal.

Palestinians and some Israeli archaeologists have criticised the dig for what they say is an excessive focus on Jewish remains. The dig’s archaeologists, who work under the auspices of the government’s Israel Antiquities Authority, deny that charge. — Sapa-AP

For the people who live near this sacred site in Ethiopa, religion is woven into daily life
Read more
Opinion

South Africa’s not that different from Brazil