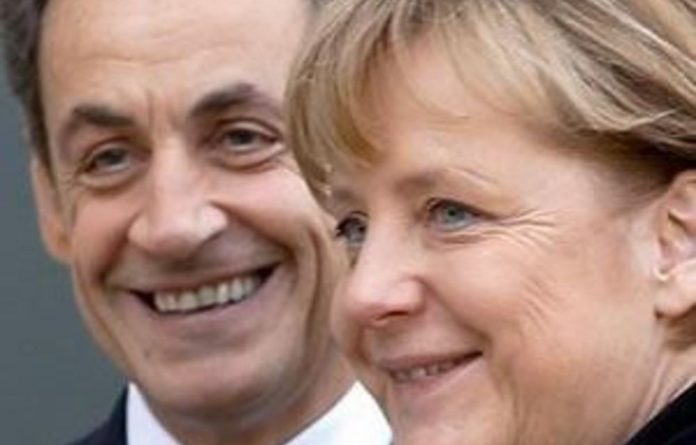 France and Germany are to sound out conservative European leaders on Thursday about their plan to defuse the eurozone’s debt crisis, eager to rally support before a high-stakes EU summit.

Paris and Berlin need to win backing quickly for their crisis plan which aims to amend the EU’s Lisbon treaty to toughen budget discipline, if they are to have it ready as they hope by March.

An overhaul of the eurozone’s fiscal rules would boost the chances of the European Central Bank, which is expected to cut interest rates later on Thursday, playing a more aggressive role in calming the debt crisis.

US Treasury Secretary Timothy Geithner has urged decisive action during a visit to Europe this week while Standard & Poor’s ratings agency has ramped up the pressure by threatening a mass downgrade of eurozone sovereign ratings.

It extended that threat on Wednesday to include the EU and large eurozone banks.

President Nicolas Sarkozy and Chancellor Angela Merkel have a chance to rally some other leaders behind their master plan at a congress of the conservative European People’s Party on Thursday in Marseille, southern France.

Hammered out
With many details still to be hammered out, Sarkozy and Merkel want to secure other EU countries’ support for the summit, which starts late on Thursday in Brussels and is scheduled to end on Friday.

But a senior German official dampened hopes for a breakthrough at the summit while, in contrast, France’s finance minister said the leaders of the two countries would not leave Brussels until a “powerful” deal had emerged.

Doubts that the leaders can agree on a plan weighed on shares in Asia on Thursday, while the euro was steady.

A media report that the G20 was preparing a $600-billion lending facility for the IMF to support Europe briefly supported share prices in late US trade but the effect faded after it was denied by G20 officials and the IMF.

If all 27 EU states do not support more fiscal union by adapting the treaty, which took eight years to negotiate, then Sarkozy and Merkel want the 17 eurozone countries to go ahead alone with more integration.

The French and German leaders are due to arrive at mid-morning in Marseille and Sarkozy is due to make a speech at 12:30GMT. He and Merkel are both due to hold bilateral meetings later with Spanish Prime Minister-elect Mariano Rajoy before they head to Brussels.

Ambitious rules
“We need more binding and more ambitious rules and commitments for the euro area member states,” Sarkozy and Merkel wrote in a letter to European Council President Herman Van Rompuy, who has made his own proposals for tackling the crisis.

“They should reflect that sharing a single currency means sharing responsibility for the euro area as a whole,” the letter added.

The Franco-German plan would change the EU’s treaty to slap automatic penalties on countries that overshoot deficit targets. The sanctions could be stopped only if three quarters of eurozone countries are against them.

Not all eurozone countries are comfortable with all the French and German proposals with Finland opposed to their call for majority votes on major policy decisions.

“Finland’s view is very clear, our stance is that unanimity is required in decision making … and that is the view Finland will promote going forward as well,” Finnish Finance Minister Jutta Urpilainen told reporters on Wednesday in Helsinki.

Doubts
ECB President Mario Draghi signalled last week that an overhaul of the eurozone’s fiscal rules would be the condition for the central bank playing a greater role in calming the debt crisis.

With financial market doubts hanging over the eurozone’s EFSF financial rescue fund, many economists say that the most effective way of getting a grip on the crisis would be for the ECB to play a more aggressive role.

The ECB will meet in Frankfurt on Thursday for a monetary policy meeting at which economists widely expect it to cut interest rates by 25 basis points to a record low of 1%.

In a sign of concern about the crisis beyond Europe, Geithner has met Sarkozy and Draghi among other top officials during a whistlestop tour of Europe to seek a breakthrough in the debt crisis.

EU leaders attending the Marseille congress are due to head to Brussels mid-afternoon in time for a summit dinner, likely to run late into the night with many details about the crisis plan to be worked out. — Reuters