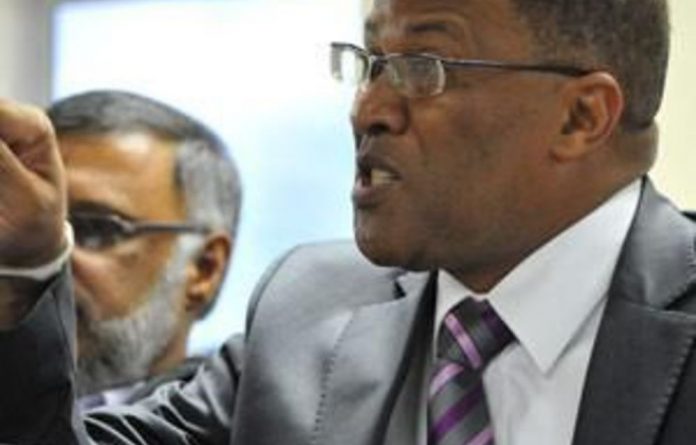 Cricket South Africa (CSA) CEO Gerald Majola believes there is a conspiracy to oust him from the federation’s top job.

“I do believe there were outside forces in this matter,” Majola told reporters in Johannesburg on Friday.

Majola could not say who these outside influences were.

Majola faced the media after he made verbal presentations to a ministerial committee, chaired by Judge Chris Nicholson, earlier in the week.

Agitated
The inquiry was established to probe the embattled CSA chief’s failure to declare bonus payments for his work on the 2009 Indian Premier League (IPL) to the CSA board.

Flanked by CSA’s acting president AK Khan and the newly-appointed legal compliance manager Pume Canca, Majola became agitated when Khan was asked if he should resign after the damage done to CSA’s reputation.

“What damage is there?” interjected Majola.

“Specify one [question] that has not been answered?”

More than 18 months after the IPL bonuses came to light, policies and procedures are only now being implemented to improve corporate governance within the federation and will be presented to the board at its next meeting in January.

Asked about the contradictory evidence presented to the inquiry, particularly by CSA’s ousted president Mtutuzeli Nyoka, Majola said he was comfortable that he had presented all the facts.

‘Liar’
“Everything I have said was backed by facts,” he said.

“It’s the truth versus whatever you want to call it. I won’t call him [Nyoka] a liar even though he has called me a liar.”

Pleading ignorance for not adhering to section 234 of the Companies Act, Majola said he had followed the same processes after the IPL as he had done in the 2007 Twenty20 World Cup and the 2009 ICC Champions Trophy.

“I have done nothing different from the other tournaments and no one in my board has told me to do something different. That is my testimony.”

Referring to claims that there were missing schedules attached to the IPL contract when it was presented to the various affiliates, Majola denied knowledge of any missing pages.

“I wouldn’t know, I don’t keep contracts,” he said.

“The contracts are in the office and they would have asked for the contracts and if something was by mistake left behind, it was definitely not an issue.

Poor publicity
“There was nothing to hide in that contract. It was a heads of agreement, not even a contract.”

Khan said the board would meet to discuss the inquiry’s findings which are due in February. He could not say if it would automatically accept those findings.

“I don’t want to pre-empt the Nicholson Inquiry. As soon as it comes to the board, they will determine that [further action] as soon as we receive the report from the ministry,” said Khan.

While the damage done by the federation’s poor publicity could not be quantified, Khan said that of the sponsors lined-up, including new sponsors, at least two had indicated that they would make a final decision by November 15.

“I would be naive to tell you that there is no damage and I would be dishonest,” Khan said.

“Yes there is reputational damage and there are relationships that have been damaged but we are working extremely hard with all our stakeholders and some of the aggrieved parties in this matter.

“In particular, we want to engage with you [the media] to move this process forward but to quantify it, I cannot give you an exact number.” — Sapa