No more cash for provinces 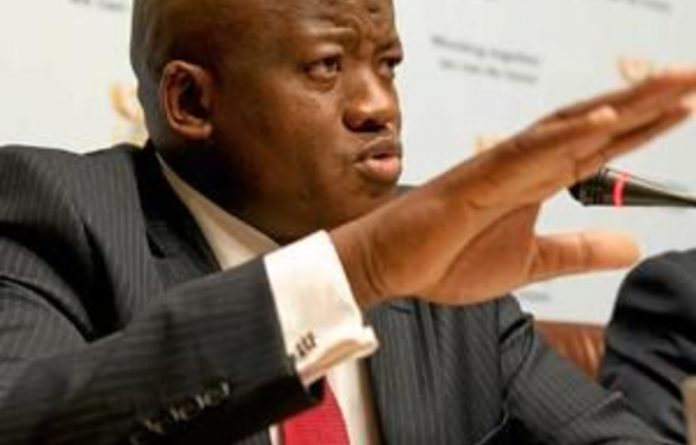 The Cabinet’s controversial decision to save three provinces from bankruptcy does not mean extra money for them, according to treasury director general Lungisa Fuzile.

The extraordinary decision to invoke section 100 of the Constitution, allowing the national government to take over the reins in some departments of Limpopo, Gauteng and the Free State, pointed not only to the dire financial straits the targeted provinces are in but also to a broader malaise in provincial administration.

Although political intrigue swirls around the timing of the intervention, particularly in Limpopo, where Premier Cassel Mathale is associated with those with anti-Zuma sentiments in the ANC, notably youth league leader Julius Malema, there is no doubt that these provinces’ finances are in deep trouble. The Gauteng health department alone has accumulated a crippling R1.4-billion in debt, aggravated by the chaotic bureaucracy of the Gauteng Shared Services Centre, which is now also under scrutiny.

Meanwhile, Limpopo has accumulated unauthorised expenditure of R2.4-billion, according to Fuzile.

Its poor cash management also saw the province max out its overdraft facility of R500-million with its commercial bank and the Corporation for Public Deposits, which allows government departments and entities to lend to one another, which rose to R757.3-million.

The refusal by the treasury to increase Limpopo’s overdraft by R1-billion brought the crisis to a head, prompting the decision to invoke the Constitution.

The impact this will have on the country’s finances remains to be seen. Research by investment bank Nomura estimated the total cost to the country would be around R2-billion. But, said Fuzile, the government will “not be making additional contributions to the expenditure of these provinces. The provinces might receive is an ‘in kind’ benefit. There will be people doing work for these provinces but paid for by the national departments from their own expenditure,” he said.

Sending a team
The treasury planned to send its own team. “We might reinforce them with external capacity drawn from outside of government, or form government-related institutions,” he said. “But there is no money to be given to the provinces to help them get out of the situation they are in.”

The first aim is to find ways to control expenditure; for the provinces to maintain their budgets.

Limpopo was placed under a section 100(1)(b) intervention, which allows the national government to take over the running of its treasury, education, transport and road, health and public works departments, with a combined budget of more than R37-billion.

The Free State was placed under a section 100(1)(a) intervention, which means that the Cabinet issues a directive to the provincial executive, outlining the extent of the failure to fulfil its obligations and the steps required to address this. In the Free State’s case this applies to its treasury, police, roads and transport departments.

Gauteng will receive assistance to deal with the chronic problems in financial and supply-chain management.

The problems will be fixed using several methods. There are likely to be sweeping forensic investigations in Limpopo and accounting officers, from MECs to heads of department and chief financial officers, will be replaced by national officials where necessary.

Fuzile said controls would be put in place to ensure that funds were paid over only when necessary and due process had been followed. Where provinces have overcommitted themselves, ways to “pull back” will be found to ensure that outflows from the province are not beyond its resources, except where this cannot be avoided, in cases of contractual or employment payments.

But contracts will be reviewed and, where possible, lawful extensions of or delays in payments for projects will be implemented. This might include phasing payments over longer periods to ensure that they are more affordable.

‘Unqualified audit’
Opposition politicians have raised questions about why national government intervened, particularly in the case of the Free State, a provincial treasury that achieved an unqualified audit.

Fuzile said that both Gauteng and the Free State had voluntarily sought help from the government because they were unable to address problems flagged during discussions at the budget council meeting, where the finance minister met MECs and provincial finance ministers to discuss budgetary matters.

In the case of the Free State the treasury’s intervention does not imply that the department is facing a funding hole. However, it is responsible for ensuring that the province’s finances are in order.

“In some cases [these types of interventions] are about systems that aren’t working well and therefore pose a risk to a province,” he said. “A treasury is where all the funds come into a province and it disperses the money to the different departments — It identifies risks of overexpenditure and takes appropriate remedial action to stop this from happening.”

When not all of these functions work in the way they should, regardless of whether a department had received a positive audit, the national government had to intervene, said Fuzile.

But it is as much about offering assistance as addressing maladministration. “It’s about help rather than saying you guys are useless, step aside.”

Fuzile would not be drawn on the political ramifications of the intervention, but he is adamant that there are real problems, which the government is duty-bound to address.
Provinces are responsible for providing two of the most critical public services, namely health and education.

According to Section27, a civil society organisation, the intervention in the Gauteng department of health is long overdue. Anecdotal evidence suggests that services are already suffering as HIV and tuberculosis (TB) diagnostics tests are being delayed, according to researcher Daygan Eagar. There are also shortages of some drugs, showing supply-chain management difficulties, while, at hospital level, infrastructure is in decay.

Capacity constraints and a dearth of skills have long been a challenge for the government at all levels. But Nomura’s Peter Attard Montalto said the “structural problem” is cadre deployment.

“In central government this has been much less prevalent and, for the most part, we think the best people are in the correct departments. But, at a provincial level, the reverse is true. Politicians are not kept in check by independently minded, competent technocrats,” he said in a research note.

Fuzile said that skills remain a problem for some provinces. But, for others, the interface between the administrative level of government and the political level is also problematic.

“For an administration to function — politicians must make political decisions based on political judgments sometimes. Other times — it’s also got to be informed by technical imperatives. If we, as officials, don’t give good technical advice, the executive authorities then may make mistakes and you end in a bad situation. The same applies when you give good advice, and this is.” But, he said, the key is to solve these problems and build institutions that will avert having to face the same problems in the future.

Vital information apps and websites are outdated as cases begin to mushroom, especially near the coast, just in time for the December holidays
Read more
Education

The president was answering questions before parliament, where he also told the EFF to allow the courts to decide on the matter of the CR17 bank statements
Read more
Coronavirus

As the president extends the state of disaster for another month, other restrictions will be eased, including those on alcohol sales and international travel
Read more
Politics

The ANC secretary general has not offered to stand aside, despite the recent NEC ruling
Read more
Advertising