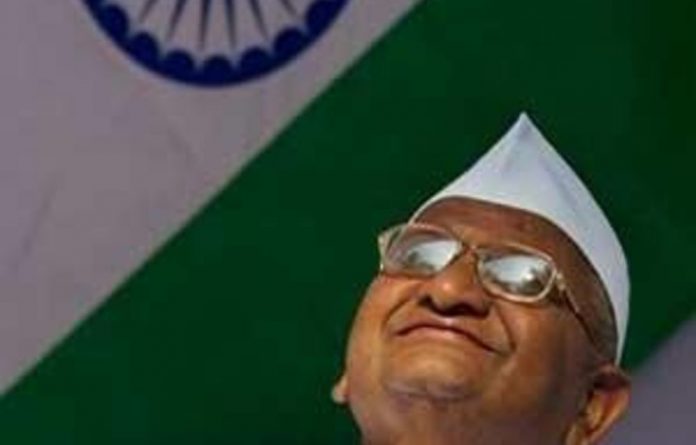 Hazare’s 12-day fast four months ago unleashed an outpouring of frustration among Indians over bribes paid in all types of transactions ranging from getting a baby’s birth certificate to tenders for infrastructure projects.

He returned to New Delhi for a one-day hunger strike to protest against the government’s draft of a new anti-corruption law, which he said was “toothless” legislation that exempted many key officials.

Surrounded by hundreds of flag-waving supporters, Anna Hazare planned to fast for seven hours to demand sweeping legislation to end India’s culture of corruption, in which bribes are paid for everything from health care to marriage certificates.

“The government is not only cheating us but the entire nation,” Hazare told a press conference on Saturday. “We totally denounce the government’s draft of the bill.”

‘Teach a lesson’
“One day the people of this country will teach a lesson to the government,” he said.

“My fast has begun. I will not speak much now,” Hazare told supporters gathered around the stage where he sat.

During his fast in August, millions of Indians rallied across the country to support Hazare, a 74-year-old former army truck driver who has modelled his image on Indian independence leader Mahatma Gandhi.

Prime Minister Manmohan Singh’s administration was unnerved by the demonstrations as Hazare became increasingly weak due to lack of food before he was persuaded to halt his protest.

On Sunday, Hazare visited Gandhi’s memorial in Delhi before heading to the open-air venue where a small crowd of about 1 000 people gathered.

‘Intolerant of dissenting views’
Dressed in plain white clothes and his trademark cotton cap, he sat cross-legged on a stage in front of the Indian national flag listening to fiery speeches from fellow activists attacking the ‘watered-down’ anti-graft bill.

Premier Singh himself has been tainted by a series of corruption scandals, with a former minister currently on trial over the mis-selling of telecom licences that cost the treasury up to $39-billion in lost income.

Hazare has raised the stakes in his battle with the government by threatening to go on an indefinite fast in Delhi from December 27 if lawmakers do not concede to his demands over the Lokpal (“Ombudsman”) bill.

The ruling Congress party reacted by taking a harder line against the veteran campaigner, with a party spokesperson on Sunday describing Hazare’s tactics as undemocratic and “insulting parliament”.

Corruption: hot topic
Singh has endured a difficult period in office over the past year, and he now faces the prospect of more rallies in support of Hazare when the activist starts fasting again at the end of December.

Corruption has become one of the hottest topics in Indian politics, while slowing economic growth, a U-turn on retail reform and parliament in near constant deadlock have left Singh (79) badly weakened.

Hazare said that India’s rulers must listen to ordinary people “struggling with corruption in everyday life”, and urged voters to reject Singh’s Congress party in state elections next year.

“It’s time for the youngsters to get on road again and protest against the unfair attitude of the government”, he said.

The government intends to pass its version of the anti-corruption bill during the current session of parliament. Hazare has threatened an indefinite fast if legislation is not passed by the end of the session. — Sapa-AFP