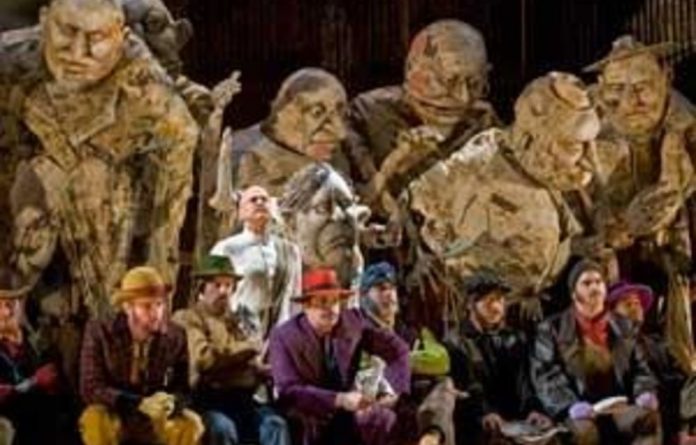 Philip Glass apparently doesn’t care for the word “minimalism”, instead describing his work as “music with repetitive structures”. With Satyagraha, currently showing at Cinema Nouveaus as part of the Metropolitan Opera’s Live in HD series, that’s what we get.

In an interview filmed before the performance, he says the idea is for the music to “wash over and transform the listener”. His intention is to “move away from words” and “concentrate on music and images”.

In that, his opera is successful. The audience is warned there will be “very limited subtitles”. The words, from the Bhagavad Gita, are sung in Sanskrit (tenor Richard Croft, in an interval interview, describing the difficulty of singing in a language one doesn’t understand: “We don’t know where the verbs are.”). And although Met opera-goers usually find translations on a small screen set into the back of the seat in front of them, in this production the words are projected on to the back of the stage, and have very little to do with the action.

Satyagraha is more pageant than traditional opera, and as pageant it is glorious. London’s Improbable theatre company’s Skills Ensemble, comprised of actors, acrobats and puppeteers, climbs the walls, takes the odd role and operates huge, grotesque puppets made of newsprint — among them randlord heads and a crocodile.

Newsprint figures prominently in the staging. The opera is about Gandhi’s two decades in South Africa, where he developed the philosophy of non-violence, or satya (truth) graha (force). Along the way he published a newspaper, the Indian Opinion. The production designers took that and ran with it, so bits of newspaper turn into everything from birds to rocks — the rocks are thrown at Gandhi by a collection of good South African burghers who take exception to his return from a visit to India.

A punishing role
The role of Gandhi is a punishing one. In a 1983 Stuttgart production, available on DVD, three different tenors take the lead, one in each act. But Met singers are made of sturdier stuff, and tenor Croft is a marvellous Gandhi. The voices throughout are as good as one expects in a Met production, especially bass-baritone Alfred Walker as Gandhi’s Indian co-worker, Parsi Rustomji and baritone Kim Josephson as his architect friend Hermann Kallenbach.

There’s a mini-documentary during an interval featuring contemporary news film and narrated by former New York Times executive editor Joe Lelyveld, who covered both South Africa and India for the Times and whose newly published biography, Great Soul, is about the Mahatma.

All in all, an inspirational epic, on a set that will be familiar to South African audiences: the walls are made of corrugated iron. But be warned: Glass’s “music with repetitive structures” is hypnotic — and it is not for everyone.