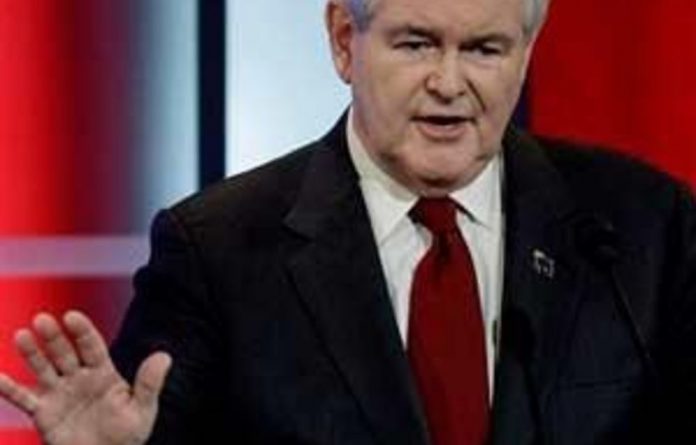 Leading Palestinian officials have rounded on the US’s Republican presidential candidate Newt Gingrich for his description of Palestinians as an “invented” people and “terrorists”, saying the GOP frontrunner’s claim that children are taught to kill in textbooks is based on Israeli propaganda.

The Republican frontrunner insisted at a candidate debate on Saturday — to warm applause from the audience — that “these people are terrorists. They teach terrorism in their schools. They have textbooks that say, if there are 13 Jews and nine Jews are killed, how many Jews are left? We pay for those textbooks through our aid money.”

“It’s fundamentally time for somebody to have the guts to stand up and say, enough lying about the Middle East.”

Palestinian officials said Gingrich’s allegations were based substantially on material produced by an Israeli organisation, Palestinian Media Watch, which has published a long list of entries on its website under the heading “Promoting Violence for Children”. An article from 2007 describes Palestinian textbooks paid for with US aid money that deny Israel’s right to exist.

But Xavier Abu Eid, a senior adviser to the Palestine Liberation Organisation, said the website and Gingrich’s allegations were groundless.

“[Gingrich] is welcome to come to Palestine so he can stop speaking from talking points and speak about reality. If he can produce a Palestinian textbook that proves his point, then he should do it. But they don’t exist in our schools — he’s quoting propaganda. It’s very cheap what he’s doing and not behaviour appropriate for a presidential candidate.

“If you ask any 13-year-old Palestinian child, he will know there is a state called Israel. Go and see if you can find an Israeli kid of the same age who can find a green line [marking the border between Israel and occupied Palestinian territory] in his textbook.”

‘Invented’ people
Gingrich first set out his position on the Palestinian people in an interview with the Jewish Channel on Friday in which he said the Palestinians were an “invented” people.

Gingrich told the Jewish cable channel: “Remember there was no Palestine as a state. It was part of the Ottoman empire.” He added that Palestinians were “an invented Palestinian people who are in fact Arabs”.

Palestinian officials dismissed Gingrich’s comments as an attempt to curry favour with Jewish voters. Salam Fayyad, the Palestine’s prime minister, urged him to apologise, describing his comments as both ridiculous and racist.

The chief Palestinian negotiator, Saeb Erekat, said the comments were an incitement to terror. “These statements of Gingrich’s will be the ammunitions and weapons of the Bin Ladens and the extremists for a long, long time,” he told CNN.

Speaking from Ramallah on Sunday, Ghassan Khatib, a senior Palestinian Authority official, said Gingrich’s position indicated an alarming swing towards extremism among Republicans and revealed a trend within American politics towards partisan posturing on the Middle East that could only damage the peace process.

“America is already suffering from criticism of not being impartial. Such an extreme position from a presidential candidate only adds to this perception,” Khatib said. “This incident has seriously damaged the credibility of the United States.”

Politically irrelevant
While the US Congress has raised alarm among Palestinians by threatening to cut aid to the Palestinian Authority if it pursues a reconciliation with Hamas, Gingrich is swimming against the tide of official US policy, which advocates a two-state solution. He is also at odds with the opinion of all but the most extreme elements of Israeli society.

While the Israeli prime minister’s office refused to issue a formal position on Gingrich’s comments, which it claims are a matter of internal US politics, Binyamin Netanyahu, who leads a rightwing coalition government, has recognised the Palestinian people.

Netanyahu advocates a peace agreement that would see the creation of an independent Palestinian state alongside Israel and has recently insisted he will not annex Palestinian territory in the West Bank.

Zalman Shoval, Israel’s former ambassador to Washington, said on Sunday that whether Gingrich’s comments were “factually true” or not, they were politically irrelevant. “Whether [Palestinians] existed before or not is neither here nor there. Palestinian Arabs for the last 50 or 60 years have defined themselves as a separate national unity. Their aspiration to a national unity and self-governance is the fact we should be dealing with.” —

US economic woes to be election deciding factor

US on alert as Hurricane Sandy drenches nuclear plant