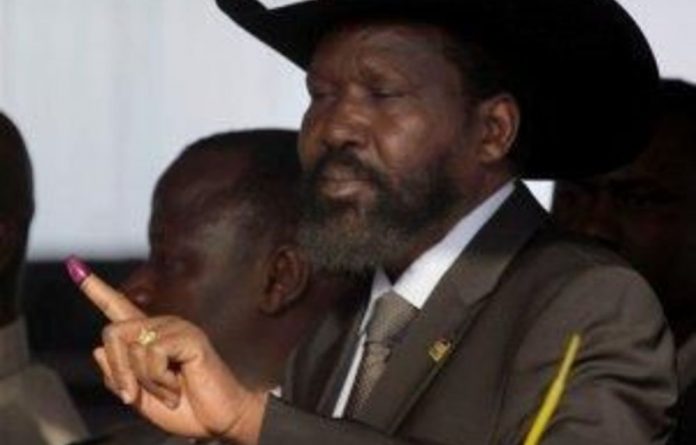 South Sudan makes its debut for western oil companies, aid organisations and agribusiness this week at a US-backed conference aimed at setting Africa’s newest country on the path to economic development after decades of poverty and conflict.

South Sudan President Salva Kiir will lead the official delegation to the Washington meeting, which comes just days after the US treasury eased sanctions to permit foreign investment in the country’s oil sector.

Kiir will address the conference on Wednesday and is expected to lay out his plans to regulate investments, organise public finances and boost the transparency of oil revenue management to entice western oil majors such as Royal Dutch Shell, Exxon Mobil and Chevron.

“We’re seeing a strong outpouring of interest amongst investment partners in the private sector in their oil economy,” said Rajiv Shah, head of the US Agency for International Development (Usaid), the chief sponsor of the conference.

“I expect you will see significant private investment in the sector, which is why it is important that South Sudan abide by international norms around transparency and makes sure that the proceeds of those investments are invested back to improve the lives of the people,” Shah told Reuters in an interview.

The two-day Washington meeting, which will also be addressed by US Secretary of State Hillary Clinton, represents the Obama administration’s effort to jump-start the economy of South Sudan after its independence from Khartoum in July.

South Sudan accounts for around 75% of the formerly united country’s 500 000 barrels per day of oil output. Oil revenues could make it one of the wealthiest countries in the region — at least on paper.

But South Sudan and Sudan still face disputes over sharing oil revenues and ending fighting in a border region, keeping tensions high between the two neighbours which fought a civil war for decades before agreeing to a peace deal in 2005.

Building from scratch
An influx of adventurous entrepreneurs has helped fuel a small business boom in South Sudan, which remains desperately poor and in need of almost everything from bridges and banks to office furniture and private security.

Roughly the size of France, South Sudan has just about 100km of paved roads. Hospitals and schools are still scarce. Oil accounts for some 98% of government revenues.

Stephen Hayes, the head of the Washington-based Corporate Council on Africa, a business association, said companies were interested in South Sudan but realistic about the prospects for operating in one of the least developed regions in the world.

“The positive thing is the amount of attention that it is getting from other countries. There is a lot going into it to make it work,” Hayes said, adding that winning contracts for development projects would be the first order of business for most companies.

Among those due to participate in the Washington conference are Marathon Oil, Halliburton Co and Google, organisers said.

The three guarantors of Sudan’s 2005 peace deal — the United States, Britain and Norway — have each agreed to pilot assistance in specific sectors of the economy.

Sudan’s shadow
Britain will help South Sudan improve public management and anti-corruption efforts; oil-rich Norway will help develop governance of the oil sector; and the United States will lead on encouraging private sector investment and boosting agriculture — seen as one of the country’s most promising sectors.

Shah said improved inputs such as hybrid seeds for maize and more nutritious varieties of sweet potatoes could boost farmer output by as much as 300%, securing South Sudan’s own food supplies and opening the possibility of future food exports in a region plagued by recurring famine.

Despite the potential, South Sudan remains shadowed by its northern neighbour Sudan, which remains subject to US sanctions and has seen its own economy nosedive after the South’s secession.

Princeton Lyman, the US special envoy who helped shepherd South Sudan to independence after a referendum last January, said the international community would keep up pressure on both sides to resolve disputes, including over oil revenues.

But he said the conflict in border areas including South Kordofan and Blue Nile states, where there have been allegations of human rights abuses, made it unlikely that Khartoum would soon get the economic help it needed — throwing a question mark over efforts to stabilise the broader region.

“What we have been saying to them is you’ve got to get back to resolving these conflicts at the negotiating table so people can turn to the economic situation,” Lyman said.

“Unfortunately I think there are people in the regime who are taking a very military approach to these conflicts.” — Reuters