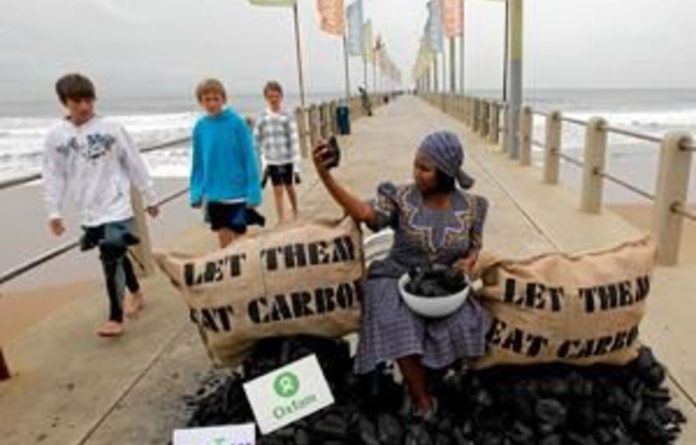 The outcome of the COP17 climate change conference was a political coup, analysts said this week, but it failed to deal with the nitty-gritty of how to keep global temperatures from rising.

Although it saved the Kyoto Protocol and the United Nations climate change convention from collapsing, it deferred all the important work for the future.

Tasneem Essop, international climate policy advocate for the global wildlife fund, the WWF, described the outcome as an “empty shell” that had simply erected the architecture for future negotiations.

“The agreement was an important political moment in the final hours that saved the process and kept things on track,” she said, “but it left all the substance for next year.”

South Africa retains the conference of the parties (COP) presidency until the next annual COP in Qatar in late November next year.

Before then workshops would need to be held on all the crucial issues not resolved in Durban, including mitigation ­ambitions, funding and technology transfer, Essop said.

The Durban Platform, as the deal was called, set up a new ad hoc group that will start working on a universal legal agreement that is expected to be in place by not later than 2015 and set to become operational by 2020.

South Africa’s lead climate change negotiator, Alf Wills, said this working group would contain representatives from all 195 countries under the UN convention and would focus on what happened when the second period of the Kyoto Protocol came to an end after 2018.

Meanwhile, the working group on long-term co-operative action, which was set up four years ago at COP13 in Bali, would have to work on implementing Durban’s unfinished business. “An informal consultation process will start in Tokyo in January or February. About 40 countries will get together to decide what needs to be done in light of the Durban agreement,” he said.

Unpacking decisions
The first official UN negotiations would be held in Bonn in May. India would host a meeting of the influential Basic countries (Brazil, South Africa, India and China) in the first quarter of 2012. Meetings of subsidiary bodies on science and implementation scheduled for June had been moved to earlier in the year because of the Rio+20 conference on sustainable development in Brazil from June 4 to 6, he said.

“There will be a number of Rio+20 preparatory meetings in the next six months. They will be unpacking what Durban decided and how it will affect the meeting in Rio,” Wills said.

The COP17 president, Minister of International Relations and Co-operation Maite Nkoana-Mashabane, said after the conference had ended on Sunday that one of its main achievements was that the $100-billion-a-year Green Climate Fund would become fully operational next year. She said a standing committee comprising 20 members from both rich and poor nations had been formed to implement and monitor climate finance, although she did not say when this new committee would be meeting.

The Durban deal also included the establishment of an adaptation committee, tasked with improving the co-ordination of adaptation actions on a global scale, as well as a technology mechanism that would become operational in 2012.

Other work in the pipeline for next year includes the assessment of carbon dioxide (CO2) emission limitations and reductions by the 38 industrialised countries that agreed in Durban to a second commitment period of the Kyoto Protocol. They need to submit them for review by May 1, in anticipation of the second Kyoto period that will come into operation from January 2013.

The information will also feed into a fifth assessment report being prepared by the intergovernmental panel on climate change, started in 2008 to assess the state of scientific, technical and socioeconomic knowledge on climate change, its causes, potential impacts and response strategies.

This report is regarded as essential for determining the emission cuts countries will be prepared to ­undertake in the 2020 post-Kyoto climate regime.

Wills said Canada’s announcement on Monday that it would pull out of Kyoto would not affect the working groups set up in Durban.

“Canada has indicated that it wants to carry on participating in the working groups and it is still part of the international process for the post-2020 regime,” he said.

Announcing the decision, Minister of Environment Peter Kent said Canada had been unable to achieve the remission targets committed to by the previous government under Kyoto. Pulling out would save the country $14-billion in penalties for not achieving those targets by 2012.

Wills said it was “disappointing” that Canada had not made use of the “true-up period” under Kyoto that would have enabled it to rectify the situation by 2014.

“Kyoto allows a country that is not in compliance with its targets to ask the international community to help. They could have used the true-up period to mitigate their domestic emissions with carbon credits from other countries.

“Canada missed an opportunity to choose the moral high ground by sending out a strong message about its intentions to address climate change,” Wills said.