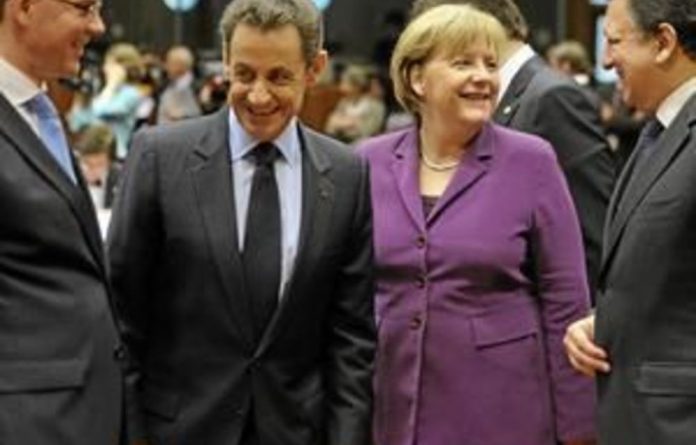 There’s a real risk that South Africa’s gross domestic product (GDP) growth could flatline next year, from the expected 2.8%, commentators warn, as the country’s largest trading bloc, Europe, enters the long, painful road of rescuing itself from sovereign-debt shackles.

Already cracks are showing in the week-old European Union (EU) fiscal treaty, with senior officials warning of the difficulties of enforcing any accord that calls for tougher budget discipline. Forecasts point to the recurring rollercoaster of this year gaining pace in 2012.

Global markets reflected this fear earlier this week, with the rand and South African bonds taking a knock as anxious traders fretted about the possibility of multiple credit-rating downgrades for the eurozone. Global equities were also hit and the euro remained under immense pressure at 11-month lows to the United States dollar (considered a safe haven), after the US Federal Reserve failed to take any new steps to stimulate growth and offset the chilling effects of the European debt crisis.

“There has been significant selling of all risky assets but the key point is that volatility will continue into the holiday season,” said an RMB analysts report. Interbank tensions also rose, with the cost for European banks to borrow in dollars hitting the highest level in two weeks.

“It’s not a eureka moment. It’s a tricky situation. This [fiscal treaty] is not a process that will take weeks or months; it will take years,” said Absa Capital’s head of economics, Jeff Gable. “If I was a bond holder or investor, I’d still be feeling pretty panicky and fearful.”

Last weekend, the 17 eurozone members agreed at a Brussels summit to tougher fiscal rules and a backstop solution, which included a monthly progress meeting of EU states and a bailout routed through the International Monetary Fund (IMF). This means that EU countries, which exclude Britain, will pump €200-billion into the IMF, with the money coming from central banks printing euros. The IMF takes on the credit risk but it’s still not enough to bail out Spain and Italy, whose combined gross financing needs of new and existing debt, according to analysts, will total €600-billion over the next two years.

The Brics (Brazil, Russia, India, China and South Africa) grouping has indicated it will contribute to the eurozone through the IMF to the tune of €200-billion, according to observers.

But therein lie the risks. South Africa and other emerging markets have their own budget-deficit problems and cannot afford to prop up the rescue fund. Similarly, the IMF cannot lend to these countries forever. After about three years, the countries would have to repay their debts and access-term funding at interest rates deemed sustainable.

“The real danger in this short-term plan is, if a country like Greece defaults, which is not impossible, then it’s really lights out,” said Gable. “We’re in a binary world at the moment and anything that moves the EU towards calamity is bad for South Africa.”

Global consensus is that the eurozone will hit a recession next year and countries linked by trade, such as South Africa, will suffer. Europe dominates South Africa’s international trade flows at about 35%.

“This is an enormous risk for the country as our economy is already battling to grow,” said Cannon Asset Managers chief executive Adrian Saville. “If Europe fails to grow in 2012, South Africa’s growth would be drawn closer to 0%.”

South Africa’s GDP growth, at about 3%, is anaemic compared with other emerging markets. The Development Bank of Southern Africa said last month that the economy needed to grow by at least 10% a year if it was to meet the government’s policy target of half-a-million jobs each year for the next decade.

“The two recessions we have experienced in the past two decades have both been associated with a recession in Europe,” said Saville. “In short, European economic slowdown presents a clear threat to our export demand and economic welfare.”

South Africa slumped into recession during 2008 and 2009, after fairly strong growth from 2003 but, unlike most other emerging markets, its recovery has been hesitant and in some ways incomplete.

“Private investment and exports already remain well below pre-crisis levels and, even worse, the country has lost an astonishingly high number of jobs, akin to the job losses in the countries at the epicentre of the global crisis and only a small fraction has been recovered,” said Abebe Selassie, an assistant director in the IMF’s African department.

“The country’s economic revival matters, not only for its 50-odd million population, but also for the rest of sub-Saharan Africa. Its economic weight in the region resembles that of Germany in the eurozone.”

There are many commentators who advocate that a weaker rand would solve the problem of constrained export demand and economic growth. But Saville takes a different view. “Even if the rand weakens and lowers the prices of our exports in other countries, if the demand is not there, lower quantities will be sold, so the benefit may not materialise,” he said.

October manufacturing data support this. Although the rand has slipped by about 20% this year, manufacturing growth has been a mere 1%. Equally, although a weaker rand makes the price of imports less attractive, if the South African economy is sluggish, demand will not switch to domestically manufactured goods. Europe is also an important destination for South African commodities. If Europe slips into a recession next year, the prices fetched for many of our most important commodity exports would be knocked.

“In global terms, the commodity that is probably most at risk of price weakness is oil but I believe that the platinum price also could come under meaningful pressure,” said Saville.
Europe accounts for about a third of global platinum consumption.

“You only have to look at our mining production, which slipped 5.6% and a further 4.2% in 2008 and 2009 respectively, to see the impact of a recession in metal-consuming countries,” said Saville. Base metals would be affected to a lesser extent, as they found solid demand in more resilient, dynamic markets such as China and India.

Absa Capital forecasts that emerging Asia will grow by more than 7.7% next year, compared with average global growth of 3.3%.