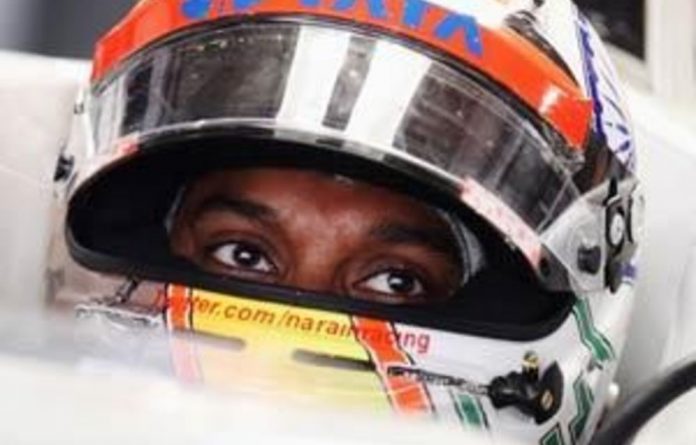 India’s Narain Karthikeyan has not given up hope of racing Formula One in 2012, despite there being only two clear vacancies remaining and a long list of rivals for them.

“I had a good Indian Grand Prix and the intention is to see what opportunities are available in Formula One and see how we can conclude something,” he said on the sidelines of a karting event in the Indian city of Bangalore.

“I’m not dealing with it directly. So there are people who are liaising on behalf of me,” added the first Indian to drive in Formula One and still the only one to score points.

Karthikeyan made his Formula One comeback with Hispania (HRT) this year after five years out, but had to stand aside from the British Grand Prix in July in favour of Red Bull-backed Australian rookie Daniel Ricciardo.

He made a one-off race appearance for his inaugural home Grand Prix at the Buddh circuit, replacing Italian Vitantonio Liuzzi, and finished 17th and ahead of Ricciardo.

‘Two steps forward’
Ricciardo has since moved on to Toro Rosso, Red Bull’s sister team, with Spanish veteran Pedro de la Rosa the only driver confirmed by HRT so far.

The Spanish-based team’s owners have also replaced Colin Kolles, who handed Karthikeyan’s his drives at Jordan and HRT, with former racer Luis Perez-Sala.

Perez-Sala said on Saturday that HRT was in advanced talks with several drivers but gave no details.

“It’s a decision we surely won’t make until the start of next year because, at this stage, who will be the team’s second driver for next season is perhaps the least urgent one right now,” he said.

He also warned that HRT, which has yet to score a point in two years, would be less competitive next season than it had been at the end of 2011 and was “taking a step back so that we can take two forward.”

Moving on
The only other team with a declared vacancy is former champion Williams, with whom Karthikeyan worked as a test driver in 2006 and 2007.

Germany’s Adrian Sutil is seen as favourite for that seat, unless Williams sticks with Brazilian Rubens Barrichello.

Karthikeyan said Kolles had made a strong contribution to HRT but the team was moving on.

“With a small team he did a good job. But now the team has a different direction and that’s a good thing,” he said. — Reuters

In a country with more than 35 000 Covid-19-related deaths at the time of writing...
Read more
Sport

The South African is the only woman to ever win an F1 race, but her career was slowed down by political and financial barriers
Read more
Sport