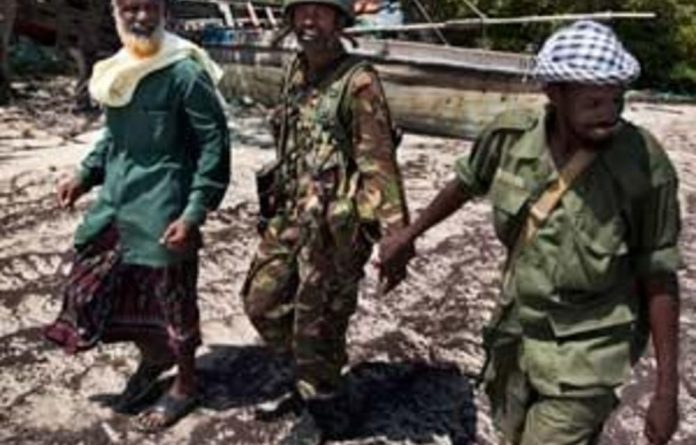 Kenyan troops marched into a decaying Somalian fishing village two months ago, but the al-Qaeda-linked al-Shabaab militants they came to hunt are still nowhere to be seen.

Kenya’s military says it’s getting ready to push forward with its offensive against the al-Shabaab insurgents, who are blamed for attacks on Kenyan soil and tourist kidnappings.

For now, though, the soldiers spend their days among ramshackle huts and along the sandy shoreline without cover or body armour.

“The more they delay, the more time al-Shabaab has to prepare. They have already been making strong propaganda to make people afraid,” Somali government spokesperson Abdirahman Omar Osman said. “The confidence of people that al-Shabaab will be defeated is dying down.”

The town of Bur Garbo is only 100 kilometres away from Kismayo, the insurgency’s main stronghold. Residents report that al-Shabaab militants are already digging trenches and tunnels around another strategically located town in the area.

“We haven’t really seen much of the enemy”, said the soldier in charge of the village, Major Solomon Wandege. “But we know they are there and we are on our guard”.

Around him, mud and stick houses lean drunkenly over footpaths overgrown with weeds. On the beach, bleached fishing boats bake in the sun — the Kenyans have forbidden them to go out too far “for security reasons”. Near the green patch cleared as a helicopter landing, soldiers have thrown camouflage mesh over artillery guns. So far, there’s been no one to shoot them at.

In January, Somalia’s civil war will enter its 21st year. The Kenyans are just the latest in a long line of forces to arrive in Bur Garbo. They have Humvees; helicopters; and ration packs with canned pineapple, Weetabix and powdered milk for tea. But there are no Kenyan civilians along to reach out to Somali civilians. Nation-building, the Kenyans insist, is not on the cards.

As any Somali will tell you, it’s easy to take ground in Somalia. It’s holding it that’s hard. Just ask the Americans. Their involvement, and that of a subsequent UN mission, ended in 1994 after Somali fighters shot down two US Black Hawk helicopters, killing 18 Americans. A generation later, nothing has changed.

She’d like someone to set one up, she said, because she thinks it could help people. Right now the town is loosely governed by elders, but they don’t have the power or resources to make any improvements. Ibrahim has never been further from her home in her life than Kismayo — where the Kenyans say they are now heading.

“We are here to defeat al-Shabaab. We are committed,” said Kenyan Major Seif Rashid, who carries two magazines of ammunition velcroed across his chest. “So far we’ve had a degree of acceptance because we’ve brought an element of security. But unless people’s lives improve, they will eventually turn against us.”

The Kenyans have been counting on international aid groups to prop up their counterinsurgency campaign — the phrase “hearts and minds” crops up repeatedly in conversations with the soldiers. But the humanitarians say they target the weakest, not the most strategically important, and that they’re not interested in following the Kenyan army around.

The Kenyans may find it hard to explain these distinctions to the Somalis, especially since they shut down the town’s two main revenue sources — fishing and the charcoal trade — because they didn’t want strange boats coming close to shore.

Rifles and uniforms from the Kenyans
“We want the rest of the world to assist us. There is insecurity here. There is no food,” said Mohamed Farah Ali, the bearded commander of the local Somali forces in town.

The Kenyans describe the Somali fighters as government soldiers, but they’re really closer to a clan militia. The weak UN-backed government only holds onto the capital, with the help of nearly 10 000 African Union peacekeepers. Government forces in the capital are paid for by Italy and the US Somali government influence in Bur Garbo is nil. The Somalis here say they are paid by the Kenyans.

They have rifles from the Kenyans too, and uniforms, they say, motioning to the olive green trousers they wear above the plastic flip flops. Since the Kenyans are paying them — for now — they don’t have to prey on the civilian population. Or so the families say, as the soldiers lean in to listen to the journalists’ questions.

But if the Kenyans leave, or there’s a problem with payments, or not enough to eat, then the Somali fighters may start to extract the type of taxes that eventually made al-Shabaab so unpopular.

And the militia, or its heirs, will be waiting somewhere, ready to re-emerge. For now, they are just across the river. — Sapa-AP

Rules of engagement move into the 21st century

Somali women preyed on by rapists amid famine