US withdraw from Iraq, so now what? 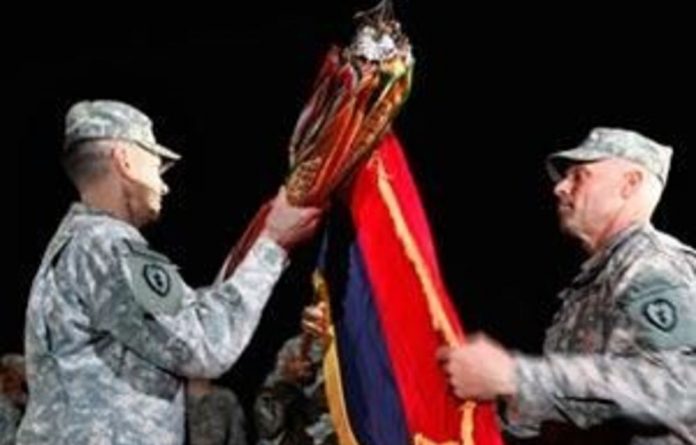 As the last American soldiers leave Iraq, the US state department assumes the reins of a complex and risky operation, the success or failure of which could determine whether the costly 9-year US engagement with the country finally bears fruit.

US diplomats, shielded by thousands of security contractors, will seek to monitor Iraq’s fragile political evolution and push ahead with civilian aid programs designed to demonstrate the benefits of US friendship.

Their aim is to secure an alliance with a nascent democracy neighbouring Iran that, as a key oil producer, has seen its strategic importance to Washington increase sharply amid the political turmoil engulfing the Middle East.

But analysts say that, without US military protection, they may end up trapped in fortified diplomatic bunkers while bureaucrats at home struggle with the logistics of organising and securing one of the biggest US diplomatic endeavours ever undertaken.

“This is something clearly that the state department has never done before,” said Patrick Kennedy, who oversees the huge transition portfolio as the undersecretary of state for management.

“We have excellent people at the state department with management, acquisitions, logistical, security, communications and medical skills,” Kennedy said. “We are ready.”

Iraq analysts are less certain, pointing to the recent bomb blast within Baghdad’s heavily-secured Green Zone as a sign of the perils ahead for the US civilian force charged with winning the peace after Iraq’s long and costly conflict.

Crafting a deal
“I think there is a lot of very serious concern about the department’s ability to take the lead on all of this, given the cuts it has faced over the years and how difficult it has been for them to operate in semi-war zones,” said Brian Katulis, a security expert at the Centre for American Progress.

The US and Iraq had long sought to craft a deal that could have kept thousands of US troops in the country as military trainers. But those talks collapsed in October, forcing the state department to go forward alone.

A handful of US military personnel will remain in the country, working with the embassy to help with arms sales and training for Iraqi forces. Talks could resume next year on whether more US troops can return for future training missions.

In the meantime, US officials say there will be roughly 16 000 people involved in the American diplomatic effort in Iraq.

About 2 000 will be diplomats and federal workers. The remaining 14 000 will be contractors — roughly half involved with security while the rest will be doing everything from keeping the kitchens running to managing the motor pool.

The operation will focus on the fortress-like US Embassy in Baghdad — the largest and most expensive US diplomatic mission in the world — as well as at consulates in Basra, Erbil and Kirkuk, each of them “hardened” to resist militant attack. The US mission in Iraq has already been scaled back. Officials originally envisioned opening more consulates and expanding other operations under a plan the senate foreign relations committee estimated could end up costing as much as $30-billion over five years.

Kennedy said the core diplomatic staff would be about as large as for other major US embassies around the world.

The cost of the war
That core operation is budgeted for about $3.8-billion next year, with total US outlay in Iraq including aid programs and military assistance, coming it at about $6.2-billion. That sounds like spare change when compared to the some $750-billion the US has spent on the war but it is still equivalent to more than a quarter of the state department’s global operational budget.

With the state department already facing budget cuts as lawmakers struggle to trim the huge US federal budget deficit, it remains unclear whether Congress will keep pumping the money into the project.

The huge security footprint brings new concerns, including both contract management and “rules of engagement” for a civilian agency more accustomed to negotiating treaties than scrambling through fire fights.

The state department has awarded several five-year contracts for security, including one for $1.5-billion to Triple Canopy to protect staff movements around Baghdad, another for $974-million to SOC Inc to protect the compound itself.

Other contracts have been awarded to Global Strategies Group and Dyncorp International to protect the consulates in Basra, Erbil and Kirkuk.

“Security is going to be the paramount issue for the state department, and it is very hard to plan for,” said Stephanie Sanok, a former state department official in Iraq now at the Centre for Strategic and International Studies.

“From a military perspective, Iraq is just about empty. And that means, despite the security contractors, they are going to have very limited movement.”

Fears of resurgence
For US diplomats and other federal officials working in Iraq, a day at work is likely to involve working the phones from behind blast walls and under heavy guard.

Diplomatic facilities will be equipped with their own radar to detect incoming mortars and missiles, while rare movement around the country will be likely be severely restricted.

“They are not going to be able to move around much. That’s obvious,” said Dov Zakheim, a former senior Pentagon official during the Reagan and George W Bush administrations who has specialised in looking at US contracting in both Iraq and Afghanistan.

“Of course they are in a combat environment. As long as they deny that then there are a lot of issues they are sidestepping.”

Kennedy said the US operation would have a handful of armed vehicles built to withstand bomb attacks and ambushes. And while protected by security contractors under the command of Diplomatic Security Service agents, they will be under orders to engage only in defensive manoeuvres.

“My security colleagues would call it ‘getting off the X’,” Kennedy said. “We run. We go. We do not stand and fight. We will execute a high-speed J-turn and we will get as far away from the attackers as we possibly can.”

Outrage
Some analysts wonder, however, if the state department’s reliance on private security contractors, who have had a chequered history in both Iraq and Afghanistan, may end up causing more problems.

The issue is particularly fraught in Iraq, where public opinion was outraged in 2007 when five security guards employed by Blackwater Worldwide were accused of killing 17 Iraqi civilians at a crowded Baghdad intersection.

Charles Tiefer, a former member of the Commission on Wartime Contracting and a law professor at the University of Baltimore, said the state department will essentially be depending on contractors as its front-line fighters — something the Pentagon long resisted.

“The defence department didn’t want to use private security contractors as a quick reaction force if they could avoid it because it’s a kind of combat,” he said.

“The state department is going to have its own private army of security contractors there and they haven’t dealt with things on this scale.” — Reuters