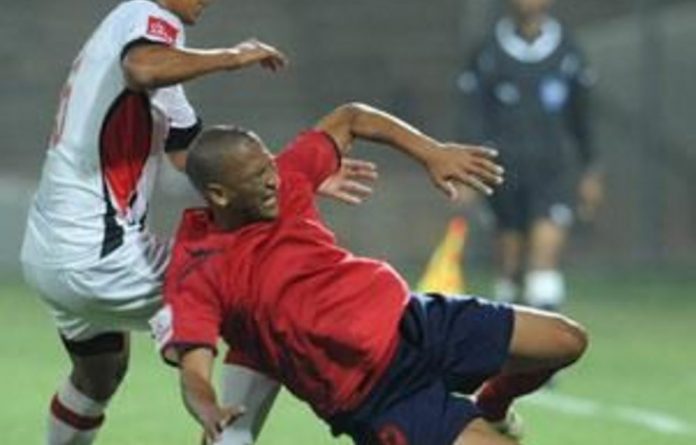 Struggling Santos and Jomo Cosmos played out a 2-2 draw, with three goals conceded in the final moments in their premiership meeting at Sinaba Stadium in Daveyton on Tuesday evening.

With scores deadlocked at half-time in an otherwise uninspiring last match of the year for both sides, striker Eleazor Rodgers opened the scoring for Santos in the 48th minute from a Jurie Basie cross on the right.

While they held on for a likely victory, Cosmos’ diminutive midfielder Tshidiso Tukane, though, sneaked in a late equaliser, also with a header in the 86th minute.

The hosts snatched the lead through Alton Meiring who rounded the keeper on the stroke of full time.

However, they failed to defend their late advantage as Santos salvaged the draw in injury time through old warhorse, Tyren Arendse with the defence was caught napping.

Breathing space
Having earned just a point from the tie, relegation is becoming a reality for the People’s Team, as the three points would have given the Cape outfit some breathing space until the league resumes again in February.

They remain 14th on the log standings in interim coach, Duncan Crowie’s final match in a caretaker capacity having taken over from Boebie Solomons last week, who was “redeployed” within the club structures.

Santos has now garnered 12 points from 15 matches with Platinum Stars now below them, along with Black Leopards and Cosmos.

A new coach is expected to be named in early January.

Cosmos too sink deeper into misery by not gleaning the maximum points to remain rooted at the bottom of the standings on nine points from 14 games.

Perfect cross
Coming off a lacklustre 3-1 defeat from AmaZulu on the weekend, Santos showed more initiative than Cosmos in an encounter where chances were rare and few between.

Striker Bheki Shabangu missed a chance in front of goal in the 19th minute, heading wide a perfect cross from Tyren Arendse on the right.

He was unmarked, with just keeper Avril Phali to beat.

Moments later, the hosts had a clear chance of their own to take the lead through their bustling forward, Siyabonga Nontshinga, who opted to shoot straight at Ryan Harrison in the Santos goal.

Outside of the late three goal thriller, both sides had failed to threaten or to be creative in the final third of the field where both goalkeepers were hardly tested. — Sapa