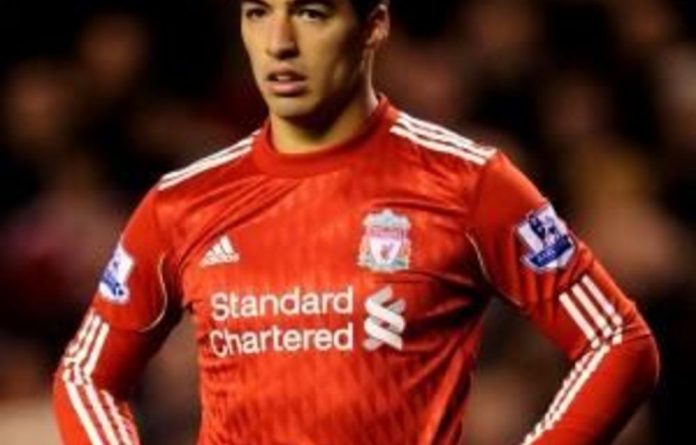 Liverpool striker Luis Suarez’s troubled disciplinary history hit a new low on Tuesday when he was given an eight-match ban for racially abusing Manchester United defender Patrice Evra during a Premier League match.

The English Football Association punishment, which included a fine of £40 000, came less than a year after Suarez left Ajax while serving a seven-match ban in the Netherlands for biting an opponent.

“Today is a very difficult and painful day for both me and my family,” the 24-year-old Suarez said on his Twitter account. “Thanks for all the support, I’ll keep working!”

The striker, branded the “Cannibal of Ajax” by one Dutch newspaper, had started to put past misdemeanours — including a contentious handball at the 2010 World Cup — behind him with fine displays on the pitch since arriving at Liverpool in January for around $35-million.

Now his reputation has been further stained by the FA’s panel, which accepted Evra’s allegation that Suarez had directed a racial insult at him during United’s 1-1 draw at Liverpool on October 15.

“The insulting words used by Mr Suarez included a reference to Mr Evra’s colour,” the FA said in a statement.

Future conduct
The FA also warned Suarez about his future conduct. But he could be hit with another ban if he is convicted of making an obscene gesture toward home supporters when walking off the pitch following a 1-0 loss at Fulham on December 5.

Liverpool, though, remained fully behind Suarez after Tuesday’s ruling, trusting the striker’s word that he made no racial slur toward Evra. As no other player or official heard the alleged remark, there was no witness to corroborate or refute Evra’s claims.

“[We’re] very disappointed with today’s verdict. This is the time when [Suarez] needs our full support,” manager Kenny Dalglish said on his Twitter account, adding in reference the club anthem: “Let’s not let him walk alone.”

In a strongly worded statement, Liverpool said it was “very surprised and disappointed” with the verdict.

“It is our strong held belief, having gone over the facts of the case, that Luis Suarez did not commit any racist act,” the club said.

“It appears to us that the FA was determined to bring charges against Luis Suarez, even before interviewing him at the beginning of November. Nothing we have heard in the course of the hearing has changed our view that Luis Suarez is innocent of the charges brought against him and we will provide Luis with whatever support he now needs to clear his name.”

‘Incredible’
Suarez’s punishment from the FA’s independent three-man panel was suspended, pending any appeal, which must be lodged within 14 days of the written reasons for the decision being received.

Liverpool claimed that Evra stressed in his written statement to the FA that “I don’t think that Luis Suarez is racist” and said the governing body echoed that sentiment in its opening statement at the hearing.

“We find it extraordinary that Luis can be found guilty on the word of Patrice Evra alone when no one else on the field of play — including Evra’s own Manchester United teammates and all the match officials — heard the alleged conversation between the two players in a crowded Kop goalmouth while a corner kick was about to be taken,” Liverpool said. “The club takes extremely seriously the fight against all forms of discrimination and has a long and successful track record in work relating to anti-racist activity and social inclusion.”

The American-owned club pointed out that Suarez is “of a mixed race family background as his grandfather was black”.

“He has been personally involved since the 2010 World Cup in a charitable project which uses sport to encourage solidarity amongst people of different backgrounds with the central theme that the colour of a person’s skin does not matter; they can all play together as a team,” Liverpool said.

“It seems incredible to us that a player of mixed heritage should be accused and found guilty in the way he has based on the evidence presented. We do not recognise the way in which Luis Suarez has been characterised.”

“It is also our opinion that the accusation [against Suarez] by this particular player was not credible — certainly no more credible than his prior unfounded accusations,” Liverpool said.

English football’s anti-racism body said that by convicting Suarez of racism it had sent out a message to world football.

“The FA has shown leadership and intent through what has clearly been a difficult and complex complaint to deal with and invested time and expertise to ensure this outcome,” Kick It Out chairperson Herman Ouseley said. “It has demonstrated that it will not stand for discrimination, something organisations such as Fifa and Uefa should take heed of.

“Kick It Out will continue to work with clubs and players, at professional and grass roots level, offering education on what is deemed offensive and unacceptable behaviour.” — Sapa-AP