Man U outshines City with 5-0 rout of Fulham 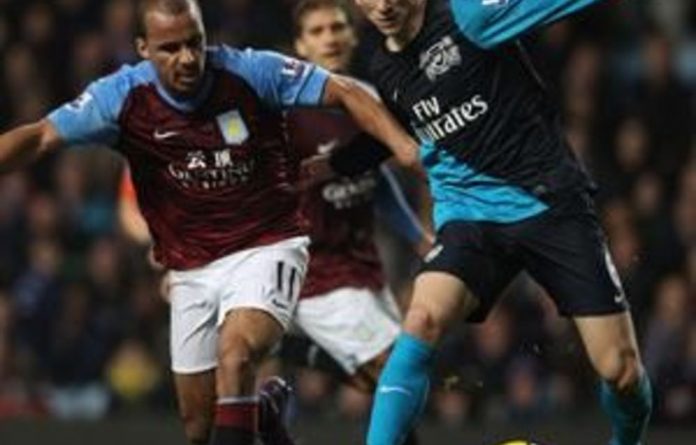 Manchester United managed the rare feat this season of outshining Manchester City’s goal-scoring prowess on Wednesday to keep the heat on its neighbour in the Premier League title race.

While City maintained its two-point lead over United with a 3-0 victory over Stoke, its second-place rivals routed Fulham 5-0 at Craven Cottage.

Such emphatic victories have been the norm for big-spending City this season but for United it was the biggest in three months.

“It was very impressive, we’ve not scored as many as we’d like to but we’d been playing well,” Giggs said. “The second part of the season we always kick on and put in performances and that’s pleasing.

“We don’t want to rely on the forwards for goals, we need to share them around.”

It was a tighter encounter at Aston Villa, with Arsenal relying on Yossi Benayoun’s late goal to secure a 2-1 victory for his fifth-place side.

Positive light
Liverpool is two points behind Arsenal after Charlie Adam missed a penalty kick in a 0-0 draw at Wigan. Luis Suarez featured for Liverpool a day after receiving an eight-match ban — on hold pending any appeal — for racially abusing United defender Patrice Evra.

A player at the centre of a more serious racism investigation, John Terry, is due to captain Chelsea at Tottenham on Thursday, a day after being told by prosecutors that he will be charged for hurling abuse an opponent.

But after two days of off-field controversies, United produced an eye-catching display that cast the Premier League in a more positive light for its global audience.

United had failed to win on its past three visits to Craven Cottage but Danny Welbeck’s fifth-minute opener, capitalising on lax defending, ensured that miserable run would come to an end.

The lead was doubled when a cross from Giggs was headed home by Nani in the 28th before the 38-year-old midfielder extended his unique streak of having scored in every Premier League season since its inception in 1992.

A shot deflected off Philippe Senderos and looped into the net three minutes before half time.

An industrious performance from Rooney was capped in the 88th when the England striker fired home from 30 metres.

“In the second half we took our foot off the gas but we were always in control and we knew we were going to win the game,” Rooney said.

The victory, though, came at a cost with Phil Jones forced off injured in the 20th after being caught by Clint Dempsey’s arm while duelling for the ball.

City will spend Christmas Day top of the top flight for the first time since 1929.

Sergio Aguero opened the scoring in the 29th and Adam Johnson, who started a league game for the first time in over two months, added the second in the 36th to give City a commanding halftime lead. Aguero scored his 15th goal of the season early in the second half.

Revival
At Villa Park, the hosts scoring the 20 000th goal since the Premier League began in 1992 was not enough to upset Arsenal.

While Arsenal has staged a revival after a fine start to the season, Newcastle is plummeting, with a 3-2 home loss to West Bromwich Albion extending the side’s winless run to six games.

Paul Scharner struck West Brom’s winner in the 85th just when it looked as though Demba Ba had rescued a point for Newcastle four minutes earlier.

West Brom had led twice — through Peter Odemwingie and Gareth McAuley — but the goals were canceled out by Ba on both occasions.

At Goodison Park, Leon Osman gave Everton only its third home win of the campaign — a 1-0 triumph over Swansea.

Sunderland overtook Queens Park Rangers just above the relegation zone after Wes Brown’s last-minute earned a 3-2 victory at Loftus Road after the visitors threw away a 2-goal lead. — Sapa-AP

Many workers, including managers, like working remotely, but research shows it can be tough on most other employees.
Education

The pandemic has forced us indoors and using more data than ever before, putting more strain on the environment
Motoring

Review: Mazda has missed an opportunity to dazzle

Mazda brought down only three of these late last year, all of which were thrust into media rotation
Advertising