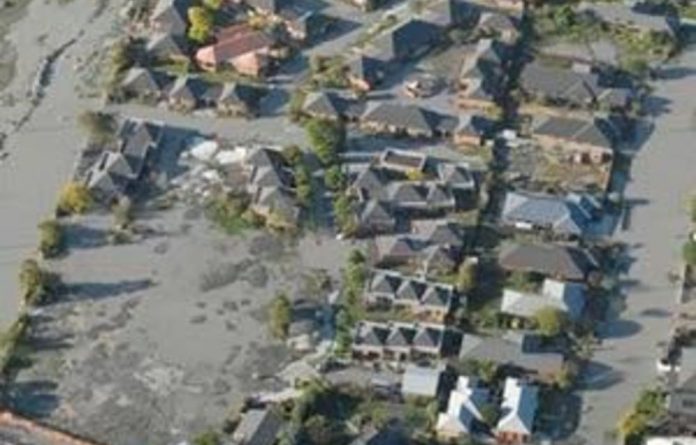 New Zealand’s Christchurch was rocked by a fresh series of powerful earthquakes on Friday, sending terrified people fleeing into the streets 10 months after a devastating quake claimed 181 lives.

Two shallow quakes of magnitude 5.8 and 5.9 and a series of aftershocks struck as malls were packed with afternoon Christmas shoppers, sending stock tumbling from the shelves and turning the festive mood to panic.

The quakes, which temporarily closed the international airport and disrupted communications, were the latest in a series that began 15 months ago and have destroyed much of the inner-city.

Local news media reported people fleeing in fear as the quake and a series of aftershocks rattled the city, leading to liquefaction and flooding in some suburbs worst hit by previous earthquakes.

Liquefaction is caused when shaking loosens the bonds between soil particles, turning the ground into a quagmire.

“It was very frightening there for a wee moment,” one resident, Brian Cornish, told National Radio.

“Everybody out in the car park was flung on the ground, liquefaction started up in the car park, the building rocked like crazy, all the cars were bouncing up and down on their springs.”

A daily occurrence
“You can’t underestimate the ongoing stress this has created for people,” Christchurch Mayor Bob Parker said, while Prime Minister John Key described the impact as “frightening and disheartening” for the beleaguered residents.

The lives of people in New Zealand’s second largest city have been shattered by a series of earthquakes that began in September last year when a 7.0 tremor struck.

That quake caused widespread destruction but because it hit just before dawn there were few casualties.

But on February 22, a lunchtime 6.3 quake killed 181 people and reduced much of the downtown area, including the city’s Anglican cathedral, to rubble, while in the suburbs thousands of homes were damaged or destroyed.

The cost of repairing the city has been put at NZ$20-billion and even after the latest quakes Key said the government’s resolve to rebuild Christchurch remains unchanged.

Smaller earthquakes in the 3.0-4.0 range have become an almost daily occurrence in Christchurch but only a few thousand from a population of more than 350 000 people are reported to have left the city.

Deputy mayor Ngaire Button said the latest quakes coming at the end of a difficult year, were likely to prompt more people to consider leaving the city but she doubted many would go.

‘Restoring our faith’
“Every aftershock we’ve had, there have been people who have felt that way, we can’t blame them for that,” she said.

One woman, Susan Holmes, told TV3 she was “sick” of the repeated tremors and threats to her home.

“It’s beyond devastating, It’s happened again. I’m sick of it,” a sobbing Holmes said as she faced the prospect of clearing debris from her home for the fourth time in 16 months.”

The US Geological Survey said a 5.8-magnitude quake struck at 1:58pm on Friday at a depth of less than 5km. It was followed 70 minutes later by a 5.9 tremor at about the same depth.

One person was rushed to hospital after being injured in a shopping mall and the National Crisis Management Centre was activated.

Civil Defence controller David Coetzee said the toll could have been much higher had the central business district not been cordoned off after earlier quakes.

Precautionary measures
“We’re lucky actually that we had the CBD already cordoned and there weren’t people in there,” he told Fairfax News.

“It could have been far, far nastier, far more serious if there were people.”

Telephone services were cut in many areas and electricity supplies disrupted but police said there were no reports of other injuries or widespread damage.

The international airport and shopping malls were all evacuated and closed as a precautionary measure.

Police spokesperson Stephen Hill said a few buildings collapsed and people were also urged to stay away from hill suburbs because of a risk of rock falls.

New Zealand sits on the so-called “Ring of Fire” the boundary of the Australian and Pacific tectonic plates and experiences up to 15 000 tremors a year. — AFP