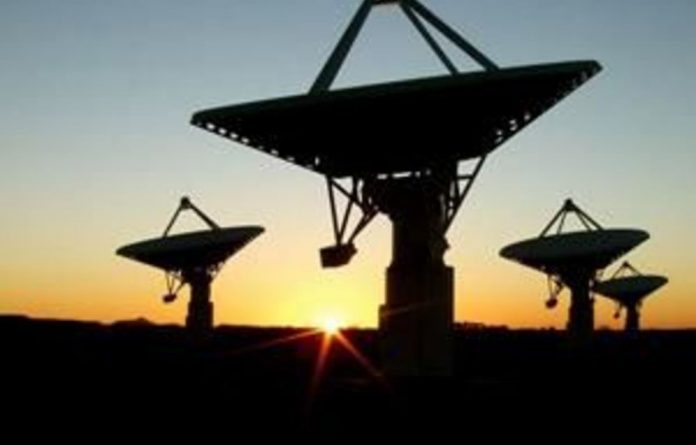 In a bus jouncing through arid Karoo hills, Professor Justin Jonas patiently tried to explain some of the theories and tenets of our universe — the Big Bang, the expansion of our universe and what we know of other things such as dark energy.

“The latest Nobel prize in physics was basically for confirming that there is something that we call dark energy,” Jonas said. He summed it up later as the force that drives not just the expansion of our universe but also its acceleration.

Difficult as these concepts may be for the layman to grasp, they are among the things the massive Square Kilometre Array (SKA) radio tele­scope could help us to understand — along with how the stars were formed, the nature of black holes and whether there is any other life out there.

Jonas, a radio astronomer from Rhodes University, has been intimately involved in South Africa’s bid to host the telescope. He is the associate director for science and engineering on the project. Since 2006, South Africa has been in a punishing race against Australia and New Zealand to host the SKA, with the final specifications for the bid submitted in September.

Until recently the project was run by an international steering committee but in early November it was replaced by the non-profit SKA Organisation, which is housed in Manchester, in the United Kingdom. It is comprised of seven partner countries, namely South Africa, Australia, China, Italy, New Zealand, the Netherlands and the UK.

There are several points in Australia’s favour. It is a developed nation and, as Deputy Science and Technology Minister Derek Hanekom told journalists, “Afro-pessimism” may work against South Africa. Australia also has a laudable academic base in radio astronomy.

But Jonas argued with a quiet determination, as have many of his colleagues and political principals, that the work South Africa had done just to bid for the telescope had advanced our country’s expertise, skill and capability by the leaps and bounds necessary to make us more than a worthy contender.

Part of this preparation has been the building of the Karoo Array Telescope (KAT-7). That is where our dusty bus trip took us. The KAT-7 is in a radio- quiet zone an hour out of the tiny hamlet of Carnavon — devoid of the noise made by cell-phones, televisions and other modern conveniences ubiquitous to modern cities or towns. Even the power lines to this part of the world have been specially developed to avoid creating radio-frequency interference.

Sheltered by surrounding hills, the region is further protected by the Astronomy Geographic Advantage Act, which places the value of the radio astronomy work being done here above that of all other developments or potential developments. The KAT-7 (seven radio telescopes, all designed and built by South African endeavour) are trained on the quiet sky, rising out of the dust like strange white blooms.

The KAT-7 is the prototype for MeerKAT (“more KAT”), South Africa’s version of the SKA pathfinder. The antennae will listen for radio waves travelling from so far away that they would provide a look back in time. The MeerKAT will consist of 64 telescopes and is due to come online for scientific observations by 2016.

Should South Africa win the SKA bid, more than 2000 similar receivers will form a pinwheel across this landscape and stretch to Botswana, Namibia, Ghana, Kenya, Madagascar, Mauritius, Mozambique and Zambia. The site, despite its remoteness, is accessible by plane and car. It has significant infrastructure in the form of computer hardware and fibre-optic networks, all carefully buried or sealed off to maintain a radio quiet zone.

Enormous amounts of data will be generated by the SKA and both the computer processing technology and human capacity to harness it is being beefed up. “It’s going to be a challenge. To have that computer power is one thing, to harness it is another,” said Jonas. “Even for MeerKAT, we are developing new techniques and algorithms to handle the data.”

But there are tougher questions than deciding between South Africa and Australia as a site for the SKA. For the project to go ahead, it will cost at least €1.5-billion. The participating countries in the SKA Organisation have committed to an initial outlay of €69-million, but where the rest of the money will come from is still to be determined.

Meanwhile, MeerKAT, already budgeted for by the department of science and technology, will become the largest radio telescope in the southern hemisphere. Together, KAT-7, MeerKAT and the work done in preparation for the SKA, from upgrading roads to the site to bursaries, will cost South Africa R2-billion.

Already, five years of observing time have been booked by radio astronomers from around the world applying to do research on the instrument, many with similarly quirky acronyms that house wordy scientific titles. There is Laduma (Looking at the Distant Universe with the MeerKAT Array), Mhongoose (MeerKAT HI Observations of Nearby Galactic Objects: Observing Southern Emitters), Mightee (MeerKAT International Gigahertz Tiered Extragalactic Exploration Survey) and finally ThunderKAT (The Hunt for Dynamic and Explo­sive Radio Transients with MeerKAT).

The bid for the SKA has also boosted South Africa’s scientific expertise. More than 300 post-graduate bursaries have been granted through SKA South Africa and five research chairs have been established at South African universities to aid the research and development of the telescope.

The engineering and scientific work done to develop KAT-7 and MeerKat is already being applied in other scientific arenas. The work leading up to MeerKAT has seen the development of the reconfigurable open architecture computing hardware (Roach) board, which enables specialised, super-fast computing.

According to Jonas, the Roach board is being developed for genome sequencing at the University of Cape Town. The infrastructure and conditions in the Karoo are so ideal that they have attracted other experiments such as the United States-led Paper (precision array to probe the epoch of reionisation) research, which is searching for the moment the first stars formed about 13-billion years ago.

Arguably, this could be seen as competition to the SKA, said Jonas. But, far from seeing it as a threat, Jonas was philosophical about it. It was, he said, “the risk you run in science”. But it was also evidence that the country was conducive to institutions doing cutting-edge work.

He said South Africa was providing digital signal processing work to Paper and the Karoo site team was providing infrastructural and technical support. The adage “build it and they will come” had worked, said Jonas, given the amount of international interest the MeerKAT alone had generated. “It comes all the way from government policy and it works,” Jonas said. It had been important to set realistic goals and not to oversell the programme. “Do not overrun schedules and budgets and, as long as you see success, money will be made available,” said Jonas.