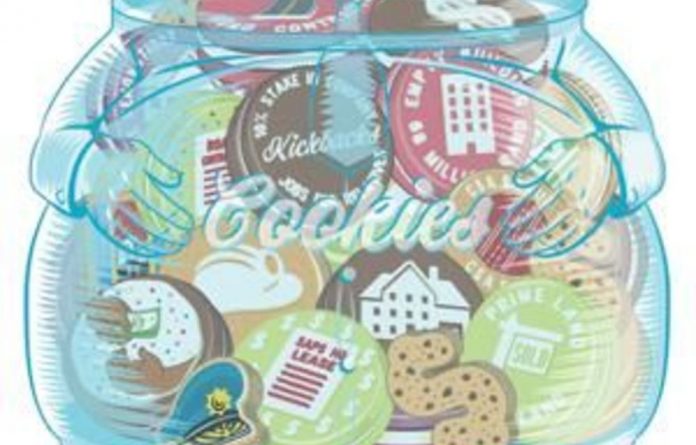 Craig McKune takes a look at all the hands that were caught in the cookie jar this year.

When he was transport minister in the 1990s, Mac Maharaj’s department pondered who would be handed two decadent plates of contract cookies.

Putting in a bid, Schabir Shaik extended one palm towards the department and with the other he passed treats of his own to the minister and his wife. Indeed, the state cookies were awarded to Shaik’s companies.

Then Maharaj lied to the Scorpions about this and, when the Mail & Guardian tried to expose these lies this year, using substantial cookie crumbs as evidence, Maharaj yanked out his legal broom, forcing the paper to sweep up most of the story.

Now he has pressed charges, claiming that the M&G “stole” the crumbs it used as evidence.

Tales of sprawling cookie banquets, packed with cronies, icing smeared across their jowls, have flowed from Limpopo this year. For example, the M&G revealed how ANC Youth League president Julius Malema’s trust owned a company that had a hand in dishing out state contracts and then demanded substantial bags of biscuits in return.

In another instance the paper described how many of these same people, including Malema, scored sweet property deals from Polokwane municipality.

First he went for the Land Bank, which dished out millions in questionable loans and contracts to cookie monster Roux Shabangu.

Then he went for the department of public works, where he chomped into his first state lease. It tasted so good that he stayed and gorged on another — the police headquarters in Pretoria.

But when he plunged his hand back into the jar for a third helping, he began to choke. News exposés and public protector Thuli Madonsela blocked his gullet.

Brazenly, he lunged for another cookie, but was again slapped down by Madonsela. Casualties of the epic cookie-monster battles include two ministers and a police commissioner.

Although the department of public works has gone to court to try to force the monster to regurgitate, other monsters are now trying to haul off the department, mid-Heimlich manoeuvre.

This Christmas the Zuma family holiday will be at the president’s sprawling personal homestead in Nkandla, KwaZulu-Natal, where members will certainly both have and eat their cake.

In recent months the roads leading to the rural homestead have been tarred and the state has spent millions on lifts, bunkers and military facilities — security for the Zuma Christmas cake parties.

And a small sprinkling of chocolate vermicelli to top it off: it appears one of Jacob Zuma’s nieces is part of a company contracted to do construction there.

As Swaziland’s economy teeters and its citizens starve under the swollen gut of a royal monarchy, King Mswati III has hungrily extended his paw across the border to his sugar daddies in South Africa.

In a highly secretive manner the South African government approved a R2.4-billion bailout for Swaziland, which would have been attached to a few limited democratic reforms.

It appears trusts and companies closely linked to Swazi royal interests would be the major beneficiaries.

Adding a little butter according to taste, the ANC appears to have close business ties with its neighbouring royals.

Then it emerged that the state had lumped a dollop of jam on Billion Group’s share, paying it R68-million for a building that stood empty for months.

All this while Billion founder Sisa Ngebulana channelled a smaller stash of choc-chip cookies back to the ANC.

Parliament’s ethics committee gave ANC MP Yolanda Botha a light whack over the knuckles after the M&G bust her guzzling on the cookie stash under her watch.

When she was head of the social development department in the Northern Cape, Botha had awarded tenders worth at least R64-million to a company that renovated her house, gave her family some shares and employed her niece.

Botha should have reported this feast to Parliament, but instead she lied about it under oath, transgressing the Girl Guide’s cookie law.

Last year the M&G described evidence of assets being stripped at the mines while workers were denied their shortbread biscuits.

More recently, damning evidence has emerged that Aurora diverted more than just a colourful bag of hundreds and thousands from the mine and into the lucky packets of its directors and associates.

Cricket South Africa chief executive Gerald Majola, in a flat panic to host the 2009 Indian Premier League cricket tournament, hammered through a contract with the Indians — favouring the Indians — without consulting his board or finance committee.

But the tournament was a success, Cricket South Africa rewarded Majola handsomely and he was able to stuff himself.

But clearly the sugar craving was too much: what the remuneration committee and the cricket body’s president claim not to have been told was that Majola had already been rolling in sweet dough that had been provided by the Indian Premier League for the same service.

Free State Premier Ace Magashula may also have been nibbling on cookies, or at least sharing them with his friends.

He delegated authority — apparently to a senior provincial office-bearer — to award a multimillion-rand provincial government lease to a former business associate and current business partner of his son.

And in separate cases a former personal assistant of Magashule — still closely tied to him — has clinched provincial state contracts worth just more than R200-million in the past two years.

Ginger rounds and double-baked rusks for everyone in the kitchen, it seems.