Lenin and Soviet past not yet history in Russia 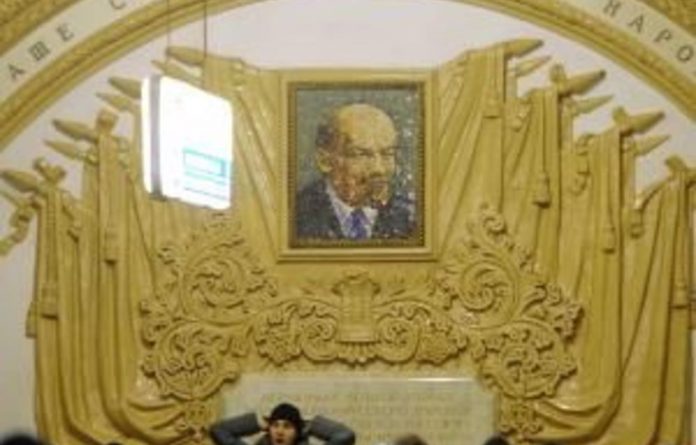 Lenin is still in his mausoleum on Red Square, his statue stares down on central squares and hammers and sickles are a familiar sight on buildings.

Twenty years after the collapse of the USSR, the Soviet past is still very present in Russia.

In Moscow, huge statues of the Bolsheviks’ revolutionary leader Vladimir Lenin stand outside the interior ministry and Leningrad station, which has kept its name despite sending trains to the renamed city of Saint Petersburg.

Driving in the Russian capital can sometimes seem like a trip back in time — there is the Avenue of the 60th Anniversary of the October Revolution, Marxists Street or Revolutionary Square.

Particular controversy is aroused by the street named after Yuri Andropov, who was briefly Soviet president but also served for many years as KGB chief, sending dissidents to the camps and persecuting the writer Alexander Solzhenitsyn and Nobel peace prize winner Andrei Sakharov.

The situation is even more pronounced in provincial cities, most of which boast a statue of Lenin as well as streets named after Felix Dzerzhinsky, the founder of the feared Bolshevik secret police.

Virtual patron saint
A bust of Dzerzhinsky, who is still a virtual patron saint of the Russian security services, adorns the interior courtyard of the police headquarters in Moscow. A suburb of the capital is still called Dzerzhinsk, as well as an industrial centre 370 kilometres to the east.

“Why are will still honouring Lenin, Dzerzhinsky and other criminals? Why are we still putting commemorative plaques on buildings where Lenin just once happened to stick his foot in?” asked Russian historian Yan Rachinsky.

“Moscow has stayed a Communist city,” said Rachinsky, a member of the Memorial rights group which fights to preserve the memory of the victims of Soviet repression.

Russian strongman Vladimir Putin — a former KGB agent who once called the USSR collapse the greatest geopolitical tragedy of the 20th century — has never shown any desire to get rid of the vestiges of Russia’s Soviet past.

There is a staggering contrast in Russia between the huge number of monuments glorifying the Soviet past and the almost total absence of memorials remembering the most tragic excesses of Communist rule.

“There is no plaque in the Moscow prisons to remember the tens of thousands of innocent people who were jailed,” said the historian Irina Shcherbakova, also a member of Memorial.

Brutal agents
By contrast some of the most brutal agents of the purges of the Communist era, notably Dzerzhinsky and his successor Vyacheslav Menzhinsky still enjoy pride of place with graves in the centre of Moscow at the Kremlin walls next to that of Stalin.

“The work on coming to terms with the past that started when the USSR fell has been interrupted,” she said.

Among dissidents, only Solzhenitsyn and Sakharov have the honour of streets named after them in Moscow but even these avenues are in less frequented areas.

Memorial has asked in vain for years that the former military prosecutors office in Moscow — which gave out 30,000 death sentences between 1936 and 1938 during the Stalin purges — is made into a museum of terror and a memorial to the victims of repression.

The authorities have also refused to put up commemorative plaques in Moscow on the former homes of writers like Varlam Shalamov, Isaac Babel and Yuri Dombrovsky who were all victims of the Stalinist terror.

“You could argue that this is a secondary issue but I am convinced that you can’t even dream of a state of rights in Russia when the bust of Dzerzhinsky adorns the police headquarters in Moscow and roads and cities bear the names of criminals,” said Rachinsky. — Sapa-AFP

A veteran ANC stalwart and member of parliament speaks about the party, Parliament and the dearth of left politics in South Africa
Read more
Africa

Tenants of the ITB, unite

You have nothing to lose but your leases, whose legitimacy is being tested in court
Read more
Sport

France finish top ahead of Denmark after World Cup stalemate

France have scored just three times in three games, including a penalty and an own goal
Read more
World