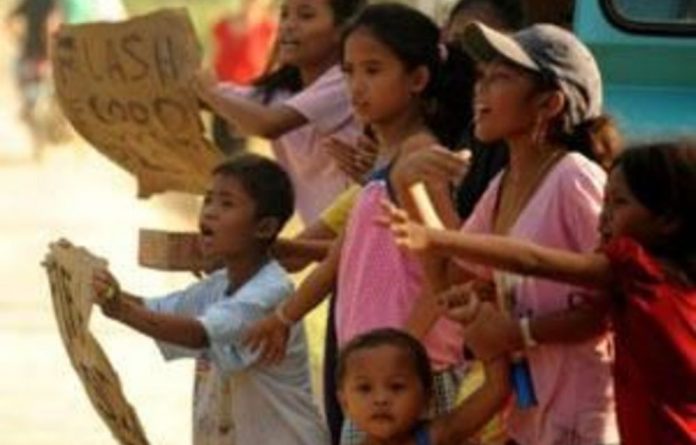 Tens of thousands of Philippine flood survivors queued for their Christmas meal in evacuation centres on Sunday, holiday spirits doused by thoughts of more than 2 000 dead or missing kin.

Village chief Aurelio Magaro joined 422 other survivors from the rural hamlet of Digkilaan lining up for food in the courtyard of a school that was flattened by the overflowing Mandulog River.

“We have a sad Christmas this year but we remain hopeful that we will recover,” said Magaro, who told AFP he lost 15 relatives to rampaging floodwaters unleashed by tropical storm Washi on December 17.

“How can we celebrate Christmas? We have no money and our houses are gone,” said an elderly woman in the queue, who like Magaro was temporarily sleeping at a nearby chapel.

A child sat on the drying mud nearby wearing a red-and-white Santa Claus-style bonnet, the only local reminder of Christmas in the mainly Roman Catholic country.

In nearby Cagayan de Oro, regional aid chief Ana Caneda said her office was checking reports that one person had died at one of the evacuation centres there.

Decomposing cadavers
“Some of the evacuees are already health-compromised,” she said, but added they preferred joining their families at the crowded camps rather than checking into hospital.

Relatives listed more than 1 000 others as missing, though officials caution many of them could be among the many unclaimed and badly decomposed cadavers at overflowing local mortuaries.

More than 69 000 people were sheltering at evacuation centres and would probably need to be put up for months or more while the government built them relocation homes in flood and landslide-free areas, Ramos said.

“This won’t be accomplished in one month or even three or six months because of their sheer numbers,” he told reporters, adding no suitable sites had been found in Iligan, the heaviest-hit area along with Cagayan de Oro.

Iligan health officer Levy Villarin said city facilities including schools and gymnasiums were sheltering 57 000 people, including at least 5 000 who had lost their homes.

Traumatic experiences
Others’ dwellings had withstood the floods but were filled with mud and had to be cleaned before their inhabitants could go back, he added.

“Some of them do not want to return to their homes because of the traumatic experience that they suffered. They lost their relatives there,” Villarin said.

He said the city had buried just a quarter of its 464 dead, a process slowed by delays in forensic work where DNA, fingerprints and dental imprints had to be taken before burial.

Even as newly recovered corpses continued to arrive the forensic team went home to Manila to spend Christmas with their families and will resume work on Monday, he said.

Three bodies were dug out of the mud in Iligan on Saturday, he said, while 17 more were washed ashore in the port city of Oroquieta, 65km away. — AFP