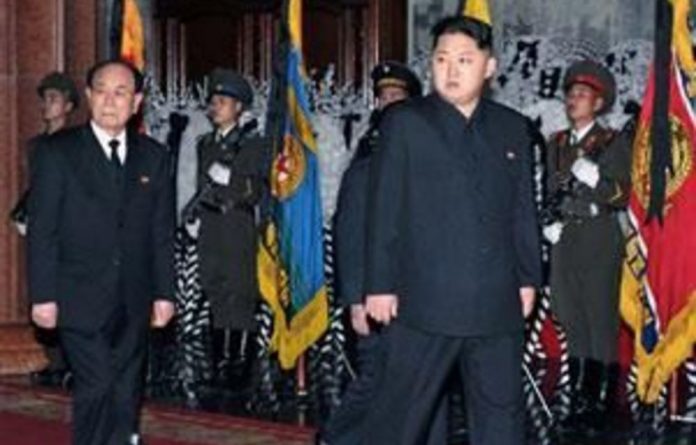 Kim Jong-il’s son was identified on Monday as head of a top decision-making body of the ruling Workers’ Party, a post that now gives him authority over political as well as military matters in North Korea.

On Saturday, state media referred to him as “supreme leader” of North Korea’s 1.2 million-strong armed forces and said the military’s top leaders had pledged their loyalty to him. On Monday, the Rodong Sinmun newspaper described him as head of the Central Committee of the Workers’ Party — a post that appears to make him the top official in the Workers’ Party.

Kim Jong-un, who is in his late 20s and was revealed last year as his father’s choice among three sons for successor, is the third generation Kim to rule the nation of 24 million. He was named a vice-chairperson of the Central Military Commission of the Workers’ Party, but was expected to ascend to new military and political posts while being groomed to become the next leader.

Monday’s reference to his new title was in commentary in the Rodong Sinmun newspaper, the mouthpiece of the Workers’ Party, urging soldiers to dedicate their lives “to protect the party’s Central Committee headed by respected Comrade Kim Jong-un”. The editorial called on the people to become “eternal revolutionary comrades” with Kim Jong-un, “the sun of the 21st century”.

Day of the Sun
The language echoed slogans used years ago to rally support for Kim Jong-il, and made clear the son is quickly moving toward leadership of the Workers’ Party, one of the country’s highest positions, in addition to the military.

North Korea refers to Kim Il Sung as the “sun” of the nation and his birthday is celebrated as the Day of the Sun, and state media have sought to emphasise Kim Jong-un’s role in carrying out the Kim family legacy throughout his succession movement.

His titles are slight variations of those held by his father, but appear to carry the same weight. It was unclear whether the nation’s Constitution had been changed to reflect the transfer of leadership as when Kim Jong-il took power after his father’s death.

A day earlier, state TV showed footage of Kim Jong-un’s uncle and key patron, Jang Song Thaek, in a military uniform with a general’s insignia. It was the first time that Jang, who was promoted last year to vice chairperson of the Central Military Commission of the Workers’ Party along with Kim Jong-un, was shown on state TV in military garb.

Mourning continued, meanwhile, despite frigid winter weather, in the final days before Kim Jong-il’s funeral is set to take place on Wednesday and a memorial on Thursday.

Mourners
People continued lining up on Monday in central Kim Il Sung Square, where a massive portrait that usually features Kim Il Sung has been replaced by one of Kim Jong-il, to bow before his smiling image and to lay funereal flowers. Heated buses stood by to give mourners a respite from the cold, and hot tea and water were distributed from beverage kiosks.

South Koreans were among the mourners in Pyongyang. The widow of former President Kim Dae-jung, who held a landmark summit with Kim Jong-il in 2000, and Hyundai Group chairperson Hyun Jeong-eun, whose late husband had ties to the North, each led delegations that drove across the heavily fortified border to Pyongyang.

They were greeted by North Korean officials during a stop at a factory park in the North Korean border town of Kaesong, according to footage from AP Television News in North Korea. North Korea sent delegations to Seoul when the women’s husbands died.

Meanwhile, a South Korean activist was also in Pyongyang to pay respects to Kim Jong-il but without South Korean government permission, her colleagues said in a statement. For South Koreans, making unauthorised trips to North Korea is punishable by up to three years in prison, according to Seoul’s Unification Ministry.

The Korean peninsula remains in a technical state of war because the three-year Korean war ended in a truce in 1953, not a peace treaty. — Sapa-AP