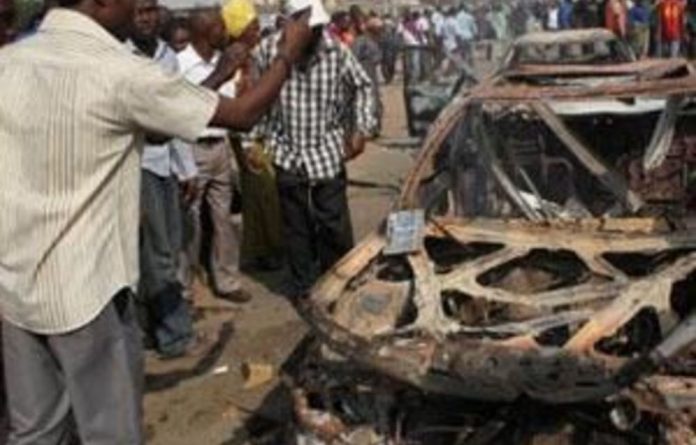 President Jacob Zuma has condemned a series of Christmas Day bomb attacks in Nigeria and conveyed his condolences to his Nigerian counterpart, President Goodluck Jonathan, his office said on Monday.

During his recent visit to Nigeria, Zuma underscored the need for the two countries to work together to promote peace and security, sustainability and democracy in the continent of Africa, a statement read.

“South Africa will work with Nigeria, within the ambit of the African Union, to rid the continent of terrorism and other related ills,” the president said during the visit.

Zuma expressed condolences “particularly families of the deceased and the injured, during this difficult time of mourning and sadness,” the statement read.

Targetted
In the north-east city of Potiskum, residents and a police source said about 30 Christian shops burned on Sunday night, while a supermarket and the home of a local Christian leader were also set ablaze.

“Thirty shops in all were burnt,” said one resident.

“A supermarket was also burnt. A one-story building belonging to a Christian was also set on fire. We succeeded in putting out the fire at the house of the Igbo [Christian] chief. There was minimal damage to the house.”

Nobody was reported hurt in the fire, which a police source confirmed on condition of anonymity.

“It’s unfortunate that we could not make any arrests because the arsonists fled as soon as they set the buildings on fire,” the source said.

Peaceful
In the nearby city of Damaturu, hit by deadly clashes between Islamists and authorities in recent days as well as a suicide bomb attack on Christmas, hundreds of residents gathered at bus and taxi stations to flee.

The city was momentarily calm on Monday after more sporadic gunfire broke out on Sunday afternoon.

“I have nowhere to stay,” said a 42-year-old trader with his wife and three young children as he waited along the roadside for a taxi or bus.

“The situation in the city is frightening. You never can tell where will be the next target. My house was burnt in the attacks.”

Another man who waited at a bus station said, “I can’t stay here any longer.”

“It’s peaceful today, but it’s no guarantee that in the next hours it will remain the same,” the 31-year-old said. “People have been killed and it could be me next.”

Nigeria was hit by a wave of bomb attacks blamed on Islamist group Boko Haram on Christmas day that killed at least 40 people, including a blast that ripped through a crowd of worshippers leaving a church outside the capital. — Sapa-AFP