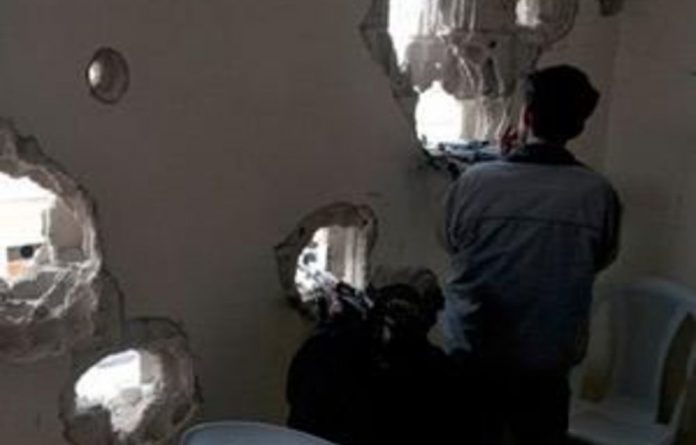 The judgment of an Arab League observer mission in Syria has been called into question after its leader, Sudanese general Mustafa al-Dabi, described the situation in the opposition stronghold of Homs as “reassuring”, despite video footage showing his monitors witnessing heavy gunfire and being shown civilian casualties.

Syrian opposition groups reported more deaths on Wednesday in Hama, where security forces allegedly used live ammunition against protesters attempting to stage a sit-in in the city centre ahead of a scheduled Arab League mission on Thursday. Estimates of casualties ranged from seven wounded to six killed.

Al-Jazeera television footage from Hama showed gunfire, rising black smoke and men marching through the streets chanting “Where are the Arab monitors?”. One man appeared to be bleeding from the neck.

The appointment of Dabi as the head of the observer mission came under increasing criticism on Wednesday from international human rights groups, who point to his past as a military intelligence chief and long-serving loyalist of Sudanese president, Omar al-Bashir, who himself is wanted by the International Criminal Court for genocide and crimes against humanity in the Darfur region.

Dabi was a military commander in Darfur in 1999, when Arab Janjaweed militias, later accused of killing many of the local population, were co-opted by the army in a counter-insurgency against rebel groups.

Rights violations
Nearly 3-million were forced to flee their homes in Darfur and the UN says about 300 000 have died — mostly from disease.

Amnesty International said Sudan’s military intelligence under Dabi’s command “was responsible for the arbitrary arrest and detention, enforced disappearance and torture or other ill-treatment of numerous people in Sudan”.

The group said: “The Arab League’s decision to appoint as the head of the observer mission a Sudanese general on whose watch severe human rights violations were committed in Sudan risks undermining the League’s efforts so far and seriously calls into question the mission’s credibility.”

Jehanne Henry, a Sudan researcher at Human Rights Watch, said that, as head of Sudan’s military intelligence, Dabi “certainly would have been in a position to know what the security services were doing at that time”.

The Arab League has defended its choice of Dabi to lead a monitoring team to assess Syria’s implementation of a peace plan agreed with the organisation last week.

The mission, currently 60-strong but eventually intended to comprise 150 observers, began its work on Tuesday in Homs, a city of 1-million people and stronghold of the rebel Free Syrian Army, where the government reportedly used tanks and armoured cars on Monday against the restive district of Baba Amr.

“The situation seemed reassuring so far … Yesterday was quiet and there were no clashes. We did not see tanks but we did see some armoured vehicles. But remember this was only the first day and it will need investigation. We have 20 people who will be there for a long time.”

The British-based Syrian Observatory for Human Rights claimed security forces killed 15 people across the country on Tuesday, six of them in Homs. It said 34 were killed the day before.

A video distributed by activists in Homs showed Arab League monitors in a battle-scarred area of the city on Wednesday, taking cover when heavy fire rang out. Another showed the body of a little boy, purportedly killed in this week’s fighting in Homs, being laid on the bonnet of an Arab League monitors’ vehicle.

“I felt they didn’t really acknowledge what they’d seen — maybe they had orders not to show sympathy. But they didn’t seem enthusiastic about hearing people tell their stories,” Omar, a Baba Amr resident and activist, said.

“We felt like we were shouting into a void. We placed our hopes in the entire Arab League. But these monitors don’t seem to understand how the regime works, they don’t seem interested in the suffering and death people have faced.”

The Syrian government of Assad said it was fighting a terrorist insurgency which had killed 2 000 soldiers and police. The regime claimed to have freed 755 detainees “whose hands were not stained with Syrian blood”, but according to Amnesty International 15 000 Syrians remain in detention. —