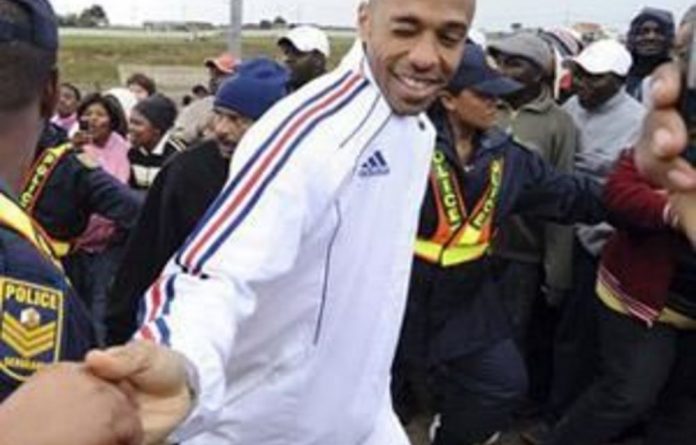 Arsenal fans are hoping talk of Thierry Henry rejoining the club will inspire the current side to victory over London rivals Queens Park Rangers on Saturday.

The 34-year-old France international scored a record 226 goals for the Gunners from 1999 to 2007 and has been training with Arsenal as his current club, New York Red Bulls, are in their close season.

Henry watched from the stands as Arsenal were held to a 1-1 draw at home to Wolves on Tuesday and it is thought Gunners manager Arsene Wenger has now sanctioned negotiations over a two-month loan deal.

With Gervinho and Marouane Chamakh scheduled to take part in the African Cup of Nations next month, Arsenal will be in need of extra fire-power and Henry does not have to be back in the US until March.

Certainly there appeared to be little dissent on the training ground itself about the prospect of Arsenal great Henry returning to the first team squad.

A boost
“I am very happy training with Thierry,” said Per Mertesacker, the Germany defender. “He shows his class and to have him with us is great because he shows his attitude, his experience.

He still has the same attitude he showed in a lot of games at Arsenal.”

Midfielder Alex Song added: “When I see him training, I am teasing him, ‘You could still play with us you know’. But he has never replied and just smiles.

“What he’s achieved during his career is just amazing. He has nothing more to prove in football. Today, he has the opportunity to give us a boost. A player with such stature would bring us a lot.”

Victory over QPR is the most pressing concern of course and Wenger is keen to avoid a repeat of the Wolves setback which saw Arsenal fire in 23 shots against a relegation-threatened side that played almost a quarter of the match a man down following the dismissal of Nenad Milijas.

Indeed, Arsenal will kick off out of the European places in sixth if Liverpool win at home to Newcastle United on Friday, although a victory will see them rise to at least fifth and to fourth if Chelsea fail to beat Aston Villa.

Queens Park Rangers are expected to make additions to the squad in January as well but for different reasons as Neil Warnock’s side will arrive at the Emirates Stadium only two places and three points above the relegation zone.

The Hoops will be looking to their own 34-year-old international forward for inspiration as Heidar Helguson, their top scorer this term with seven goals in 12 Premier League appearances, has just signed a new contract.

The Iceland international is now set to stay at Loftus Road until 2013 and manager Warnock was delighted.

“I fought tooth and nail to keep Heidar here over the summer because I knew he could be a threat for us in the Premier League,” said Warnock. “He’s proved time and again what a good player he is.

“We know he’s not going to play every game at his age, which is why we need to add to our options in that department. It’s something we’re working on and we’re quite hopeful we’ll be successful in our pursuit.”

QPR owner Tony Fernandes spent heavily in August by bringing former England internationals Joey Barton and Shaun Wright-Phillips to west London and has indicated he will back Warnock again in the transfer market in January. — AFP