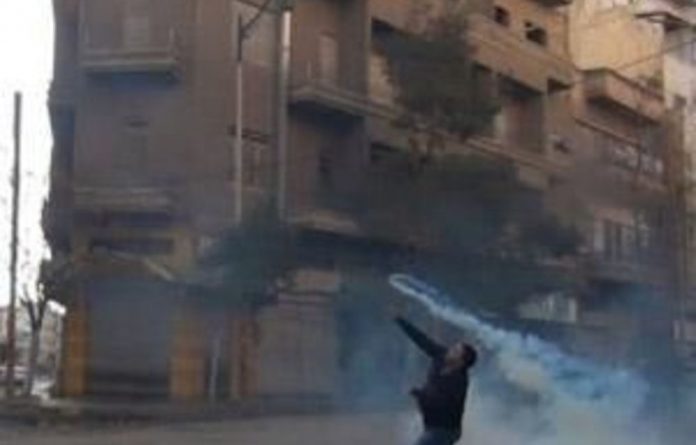 Internet activists are urging regime opponents emboldened by the presence of observers to take to Syria’s streets on Friday, a traditional day of mass protests, despite unrelenting bloodshed.

The appeal comes after human rights groups reported that at least 27 civilians were killed while tens of thousands of people demonstrated on Thursday, as Arab League observers expanded their mission across the country.

“On Friday we will march to the squares of freedom, bare-chested,” the activists said on their Facebook page.

“We will march as we did in Homs and Hama where we carried olive branches only to be confronted by Bashar’s gangs who struck us with artillery and machine gun fire,” said the Syria Revolution 2011 activists.

The head of the Syrian Observatory for Human Rights, Rami Abdel Rahman, said that despite the bloody crackdown, dissidents have been taking the opportunity to make their voices heard to the monitors.

“The Arab League’s initiative is the only ray of light that we now see,” said Abdel Rahman.

“The presence of the observers in Homs broke the barrier of fear.”

Deadly crackdown
On Thursday, about 30 000 people gathered in a square outside the Grand Mosque in Douma just north of Damascus, prompting forces to pull back from previously held positions, said the Observatory.

Earlier, as Arab League observers arrived at the city hall, security forces opened fire on protesters outside the mosque, killing at least four and wounding several others, the Britain-based group said.

The observers also visited the central city of Hama, Idlib in the northwest, and Daraa in the south, according to Syrian television.

Daraa is the cradle of the unprecedented nine-month protest movement against President Bashar al-Assad’s regime, which has ruled Syria with an iron fist for 11 years.

The US said on Thursday that the presence of Arab monitors in Syria had offered some benefit to protesters even if it had failed to halt the regime’s deadly crackdown.

“We are concerned … that even though we have monitors on the ground and they are playing a role in some places, we also have a continuation of the violence,” state department spokesperson Victoria Nuland told reporters.

Renewable mission
Nuland cited reports of people killed in Homs, Hama and Idlib on Wednesday even as “monitors were trying to deploy” in those cities following the Arab League deal with the regime.

“That said, if you go up on YouTube today, you can see great pictures of a democracy rally in Idlib that went forward with quite a crowd, at the same time that the monitors were there,” Nuland said.

“So clearly, their presence appears to have provided some space for public expression.”

According to UN estimates announced in early December, more than 5 000 people have been killed in the government crackdown on dissent since mid-March.

Activists say more than 70 civilians have been killed by security forces loyal to Assad since a first group of monitors arrived on Monday in Syria on a month-long renewable mission to implement an Arab League peace plan.

The Syrian Observatory for Human Rights reported on Thursday that security forces shot dead 10 people in Damascus province, six in the central city of Hama, five in Idlib province and five more in Homs and one in Latakia.

“Security forces are raiding a private hospital in Hama and are arresting the wounded,” it said. “Huge protests” also took place in Hama’s Hamidiyeh and Bab Qubli neighbourhood.”

Kept out
On Tuesday, when a group of observers entered Homs on the first leg of their mission, some 70 000 people flooded the streets and were met with gunfire and tear gas, forcing the monitors to cut short their visit, activists said.

France, the US and Human Rights Watch have warned Assad against trying to hide the facts from the monitors and Paris charged that the team was not being allowed to see what was happening in Homs.

General Mohammed Ahmed Mustafa al-Dabi, a veteran Sudanese military intelligence officer who is heading the observer mission, has said the visit to Homs was “good” and that Syrian authorities were cooperating so far.

His remarks reportedly triggered discontent among opposition ranks, but Abdel Rahman said it was too early to issue any judgment.

For some, Dabi is a controversial figure because he served under Sudan’s President Omar al-Bashir who is wanted by the International Criminal Court for crimes allegedly committed in the Darfur region.

The League mission is part of an Arab plan endorsed by Syria after weeks of stalling. It calls for the withdrawal of armed forces from towns and residential districts, a halt to violence and the release of detainees. — AFP