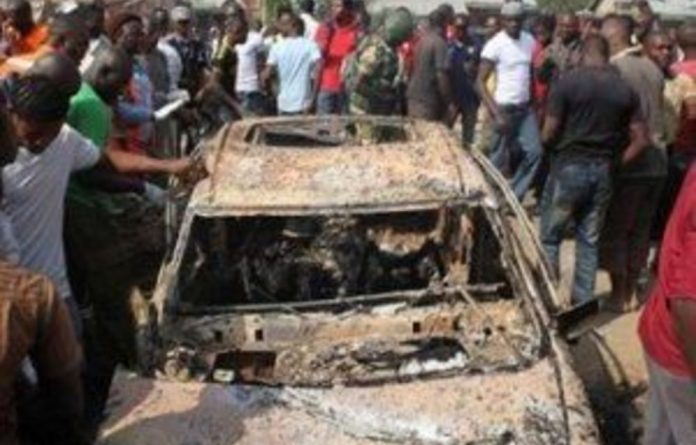 President Goodluck Jonathan vowed on Saturday to “crush the terrorists” who set off a series of bombs across Nigeria on Christmas Day, while he visited a church in which one bomb killed at least 37 people.

The blasts, including three aimed at churches, raised fears that Boko Haram, a movement styled on the Taliban and whose name means “Western education is forbidden”, is trying to ignite sectarian strife in Nigeria, Africa’s most populous nation and top oil producer.

The deadliest attack struck St Theresa’s Catholic church in Madalla, on the edge of the capital, Abuja, killing 37 people and wounding 57, according to the latest toll.

A spokesperson for the emergency services said the country was on high alert, with an expanded security presence, for New Year.

During a brief visit to the church, amid tight security by dozens of armed soldiers, Jonathan offered condolences to relatives of the victims, many of them weeping after a vigil.

“We assure Nigerians that we will protect them. We have taken some steps which I’m going to announce tonight,” he said in informal comments to relatives while at the church.

“We will crush the terrorists. If there are institutions … which are harbouring terrorists, we will deal with them.”

Traces of the devastation were still clear, with the church windows shattered and glass on the ground.

Jonathan, criticised for what was seen as a slow response to the bombings, stepped up his rhetoric on Friday night with a promise to fight Boko Haram.

“We are hopeful there won’t be any untoward development. The government has put security throughout the federation, including near the flashpoints. We are optimistic, but we are fully mobilised,” he told Reuters.

The government held an emergency meeting with security officials on Thursday and is also looking at using other channels to stop the conflict, which started as a local northern problem but is fast destabilising the whole country.

National Security Adviser General Owoye Andrew Azazi has told Reuters the security services were considering making contact with moderate members of Boko Haram via “back channels”, even though explicit talks are officially ruled out.

In the central Nigerian city of Jos, which was also bombed at Christmas, two dozen armoured personnel carriers were patrolling the streets ahead of New Year celebrations.

The commissioner of police for Plateau state, Dipo Ayeni, told Reuters: “We have obtained this tactic of a show of force so that we can celebrate the New Year without any hindrance, and so there should be no cause for panic.”

The bombings by the northern-based movement have strained Nigeria’s already fractious north-south divide.

“The events that caused Nigeria’s civil war are repeating themselves,” said Uche Udemezue, an Igbo housewife in the south-east, referring to the secessionist war of her people against northern rulers in which more than a million people were killed in the late 1960s.

“The north should know nobody has a monopoly on violence.”

Attacks in and around the capital – including one on the UN headquarters in August that killed at least 24 people — suggest Boko Haram is trying to raise its profile and spread out from its heartland in the northeast. – Reuters