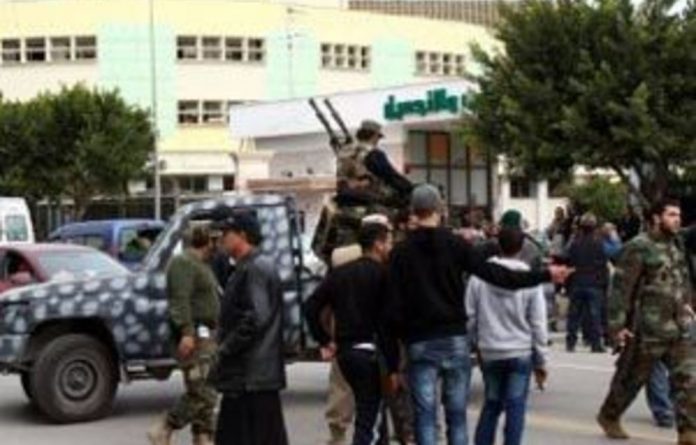 A gun fight erupted in central Tripoli on Tuesday, killing four, as a group of former rebels from Libya’s third biggest city, Misrata, clashed with some ex-fighters from the capital, witnesses said.

The two groups of former rebels, who helped topple Muammar Gaddafi’s regime, traded anti-aircraft and heavy machine gunfire as they fought in broad daylight in a Tripoli neighbourhood.

The fighting raised fresh concerns over the issue of militias in Tripoli and the potential security threat they pose months after Gaddafi’s death.

The gun fight broke out between al-Zawiyah and al-Saidi streets near a building used as intelligence headquarters by the former regime.

“Four thwars [revolutionaries] were killed in the incident and five or six were injured,” Abdelhakim Belhaj, the head of the Tripoli military council, told a press conference.

“I regret the incident. I don’t want to go into details but it was the result of a problem between Misrata thwars and members of the military council of Zawiyah street,” Belhaj said.

“What happened is an irresponsible act and the situation is now under control. Since [this] afternoon we [have not heard] any gunshots,” he added.

Earlier Tuesday, Massud al-Khadar, a member of the militia from the neighbourhood, said two of its fighters were killed in the clashes which began in the morning.

‘Under control’
He said the violence started when a rival militia from Misrata attacked his group based near the former intelligence building.

The head of the security committee in the interior ministry, Colonel Mustafa Noah, told the official WAL news agency his ministry’s forces were surrounding the neighbourhood and “the situation was under control”.

He said “the clashes occurred between former thwars [revolutionaries] of al-Zawiya street and thwars from outside Tripoli.

“An investigation has been launched to determine the circumstances and causes of the incident,” he added.

Another version of the clashes given by residents was that forces linked to the new government’s interior ministry may have tried to retake the intelligence building on Tuesday, provoking a clash with the militia group occupying it.

Those reports could not be independently verified and the interior ministry declined to comment.

Ex-rebels, who remain organised in militia brigades, are visible in many parts of the capital and some have taken control of former government buildings to use as bases.

Fathi Ali Bashagha, spokesperson of the Misrata military council, played down the clashes.

Semblance of order
“Such incidents are expected as there are so many arms in the city,” Bashagha said.

“It is the fault of the government. There is no authority and the government has lost more than one month of time. It has done nothing” in resolving the security issues, he added.

The presence of militia groups in Tripoli is one of the biggest challenges facing the new Libyan rulers.

The militias, several of them from outside Tripoli, helped liberate the capital from Gaddafi’s forces in August. Since then, they have stayed put in the city and refused to return to their home towns.

In the absence of regular security forces, the militias provide a semblance of order on the streets.

Powerful militias from Misrata and towns such as Zintan, south-west of Tripoli, are even guarding key installations in the capital.

Tripoli residents have been protesting against the presence of militias from outside the capital, saying it has actually raised security concerns.

Several militia commanders have said their fighters will leave Tripoli only when a new national army is formed. Libyan officials have said most of the former rebels will be integrated into the security forces. — AFP