ANC centenary celebrations ‘open to all’ 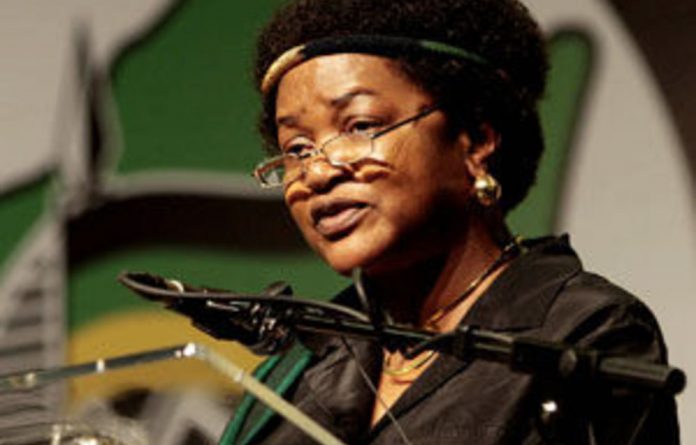 All South Africans and people from the African continent and the world were welcome to attend the ANC's centenary celebrations in Mangaung, ANC chairperson Baleka Mbete said on Wednesday.

"They do not need accreditation."

Mbete said there was huge interest from people to attend the events.

"It was based on this interest that we would have no less than 100 000 people attending."

Mbete said Free State residents had responded positively to the event by opening up their homes to South Africans who could not find accommodation.

ANC national executive committee members have begun their deployments in the Free State together with the provincial ANC leadership to mobilise communities to attend.

ANC deputy secretary general Thandi Modise said most of the visitors would be from the Free State.

The entertainment programme for the celebrations begin on Saturday January 7 with an intercultural performance at the Mangaung Outdoor Sports Complex — which would continue until the close of the events.

For Sunday's main event in the Free State Stadium only 6 000 seats would be reserved for presidential dignitaries. The rest of the stadium would be for party supporters and those citizens interested in the January 8 speech of President Jacob Zuma, and the entertainment programme.

Other aspects of the centenary programme include two golf tournaments at the Bloemfontein and Schoemans Park courses on Friday.

Most of the party supporters from other provinces would start arriving by bus and trains on Sunday morning, for the main January 8 event.

No clarity on Madiba
There was no indication whether former ANC president Nelson Mandela would attend.

"We continue to hope," Mbete said, adding the party was in contact with the Mandela family.

She confirmed that a total of 46 sitting heads of state would attend.

Former heads of state attending the gathering were named as Jerry Rawlings from Ghana, Sam Nujoma from Namibia, Kenneth Kaunda from Zambia and Joachim Chissano from Mozambique.

"We also have confirmation from 80 fraternal parties in the like of the MPLA, Swapo, Frelimo, PAIGC, the Norwegian Labour Party, Communist Party of Cuba, the German Social Democratic Party and the National Congress of India."

The party said it had 50 participants from anti-apartheid movements from all over the world including the family of the late Father Trevor Huddleston and eminent persons such as Reverend Jesse Jackson.

All South African political parties were invited, some of whom had confirmed including the Inkatha Freedom Party, Congress of the People, APC, United Democratic Movement and the Democratic Alliance, the traditional healers organisations, religious and traditional leaders, organisations of civil society and individuals of good standing in society.

"We will also be graced with the presence of His Majesty Otumfo Ose II, the Asante Hene of the Ashante people of Ghana," the ANC said.

From the clergy and religious leaders, the ANC confirmed the attendance of the Archbishop Emeritus Desmond Tutu and representatives from NICSA, which included major faith based organisations, such as the South African Council of Churches and All Africa Conference of Churches.

Unfortunate
The ANC said it was unfortunate that African Christian Democratic Party (ACDP) leader Reverend Kenneth Meshoe had decided not to honour the centenary celebrations.

Meshoe has rebuked the ANC for dedicating South Africa to the ancestors and spirits of the dead, mostly dead ANC leaders.

ANC chaplain-general Reverend Vukile Mehana said Meshoe forgot that the ANC was a formation of many social forces, including interfaith and ecumenical formations with different beliefs, cultures and theologies.

"The character and policy of the ANC includes recognition, respect and tolerance of all such religions and faith-based formations including African religion on a fair and equal basis."

ANC chief whip Mathole Motshekga, organiser of the centenary's cultural events, said Meshoe was a drop in the ocean. He said Christians also remembered those that had passed on.

He said African beliefs had regained its status in South Africa and the inter-faith basis of the ANC should be respected.

Mbete also indicated that the centenary celebrations were not about worshipping ancestors.

She said the ANC would venerate the spirit of those who were part of its history in accordance with African theology principles, which the ANC fully embraced and promoted. — Sapa

Follow the Mail & Guardian's coverage of the ANC's 100th anniversary.