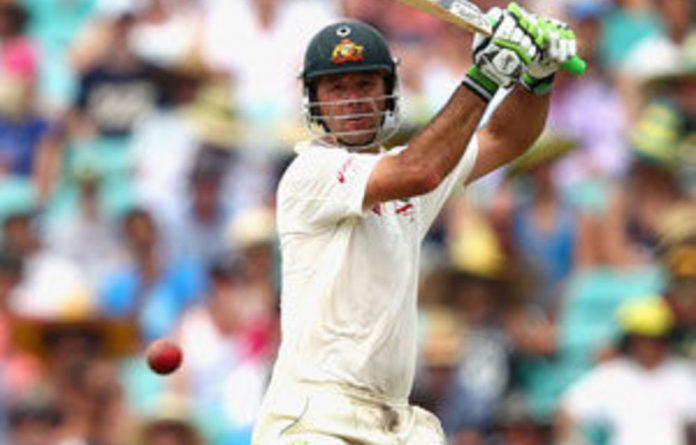 Ricky Ponting scored his first century in nearly two years and shared a 288-run partnership with Michael Clarke as Australia reinforced its dominance on the second day of the second Test against India at the Sydney Cricket Ground.

Ponting brought up his 40th Test hundred with a risky single shortly after lunch, before falling to the new ball for 134 as Australia reached 349-4 at tea on Wednesday for a 158-run first innings lead.

At the interval, captain Michael Clarke was unbeaten on 170, his highest Test score, with Mike Hussey on 8.

Ponting had not made a century since January 2010 when he scored 209 against Pakistan in Hobart. Since then, Australia’s greatest Test run scorer went 34 innings without reaching the milestone.

Recently, pressure had been growing on the Australian selectors to replace Ponting as the team’s form slid along with that of the former skipper, despite recent scores of 62 and 60 in Australia’s 122-run win in the first Test at Melbourne.

Ponting’s attempt at his 40th Test century very nearly turned into disaster when on 99 he attempted a quick single to mid-on, where Zaheer Khan quickly gathered and threw at the stumps, only to just miss with a diving Ponting well short of his ground.

The former captain’s relief was clear as he dusted himself off, before raising his arms in triumph and saluting his family in the crowd in recognition of his 150 ball century, including 11 fours.

Batting dominance
Ishant Sharma eventually broke the partnership in the second over of the new ball, tempting Ponting into a square drive straight to Sachin Tendulkar at gully.

Skipper Clarke looked more at ease against the blunt Indian attack, moving past his highest Test score of 168, shortly before the tea break with a blistering back-foot drive through cover.

Clarke reached his off 136 balls, with 13 fours, including a brilliant cover drive off Sharma to reach triple figures just before lunch. The captain celebrated in characteristic style, raising his bat and helmet in the air toward his hometown crowd.

India’s bowlers started the day hoping to build on Zaheer Khan’s three wickets the previous evening when he removed the left-handed trio of Dave Warner (8), Shaun Marsh (0) and Ed Cowan (16) to have Australia reeling at 37-3, but the attack looked bereft of ideas against Clarke and Ponting.

Australia piled on 233 runs in the two sessions on Wednesday, cruising past India’s total of 191 and forcing India captain MS Dhoni to spread his fielders in an attempt to limit the damage.

The dominance of the bat on day two was in sharp contrast to the opening day when Australia’s pace attack ripped through India’s highly-rated batting lineup, with 21-year-old James Pattinson taking four wickets. — Sapa-AP