A doctor born of hope 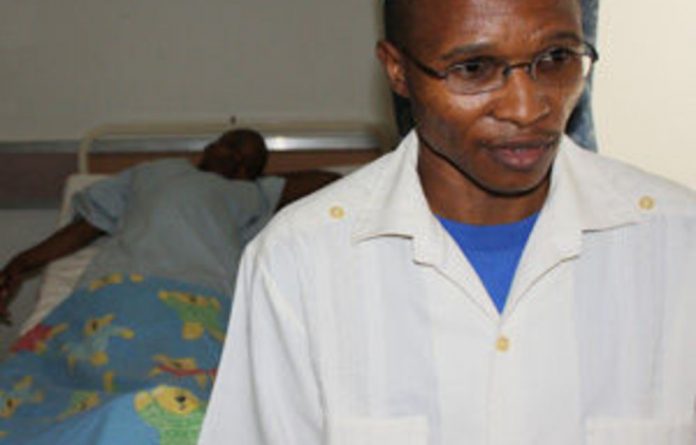 When Thembinkosi Motlhabane stood on the pavement outside a hospital in an isolated part of the former Transkei two years ago, he felt overcome by a “great wave of relief and excitement”. More than 20 years before, when Motlhabane was 10, his mother started selling fruit at the entrance of Zithulele Hospital, about 100km from Mthatha. Her meagre earnings sustained the family.

Often, when Motlhabane was a boy, his mother would return from a day in the sun, wind or rain and outline a “vision” she had that day. “I don’t want you to be like me, my boy,” she would say. “I want you to be educated and be able to carve a good future for yourself.”

Motlhabane’s mother, Theodora, died a few years ago. She had still been a fruit seller and was still poor. But the “legacy” she left and her decades of “uncomplaining sacrifice” left her son “rich beyond belief — rich in body and spirit”.

For when Motlhabane (32) walked through the gates of Zithulele Hospital in January 2011, past his “undefeated” parent’s ghost, it was as a qualified medical doctor. “That was my mother’s vision. She wanted me to study, like the doctors of Zithulele in their white coats. But she never lived to see her dream come true. My mother did everything possible to ensure that I was at school, even though she hardly had any money.”

Motlhabane is one of more than 600 South African doctors who trained in Cuba, through a partnership between the respective governments. In September 2000 he joined Villa Clara University in one of Cuba’s central provinces, Sancti Spiritus. “I would rather have studied in South Africa, but I couldn’t get a bursary for medicine from a local university and I had no money to pay for myself.” After six years of study in Cuba he returned to complete a residence year at Walter Sisulu University in Mthatha.

Motlhabane matriculated in 1997 but, “driven” by his mother’s dream for him to be educated, he returned to school the next year to improve his marks in maths and science so that he could qualify to study medicine. He comes from the town of Mqanduli, about an hour’s drive from Zithulele. “I know what it’s like to be poor,” he said. “So I was grateful for the scholarship to study in Cuba.

Now it’s a pleasure and an honour for me to work at a hospital in a village where people used to give my mother food parcels for her children. They fed me at times when I would have gone hungry — and now I feed them in a different way.” His state-sponsored scholarship, paid for in large part by the provincial government, requires him to serve in rural hospitals in the Eastern Cape for at least six years.

The struggle
Motlhabane said although Cubans were “really nice” and never made him feel like an “outsider”, training and living in the Latin American country presented challenges. He had to master Spanish, the language in which he had to study. “I spent a year at a Spanish language school before commencing doctor training,” Motlhabane said.

Then he laughed: “But even after that, when I sat in a Spanish medical lecture the first time, I could not ‘hear’ anything. I couldn’t understand. I was panicking. I had to rely on my Spanish textbooks and go back home and read. It was a struggle.”

But, fortified by memories of his mother and motivated to live up to her expectations, it was a struggle he overcame. “Spanish became second nature. I still find myself sometimes speaking it to people.” When he returned to South Africa it was to be “tortured” by another language: English.

Motlhabane said South Africa could learn a lot from Cuba “with regard to health systems”, but that the two nations’ health challenges are “very different”. As a trainee doctor in Cuba he came across just one case of tuberculosis and not a single case of HIV. But on his return to South Africa he felt “overwhelmed” by the high rates of these infectious diseases.

“If you don’t know TB or HIV here in South Africa, your medical [knowledge] is incomplete. It’s like you don’t know anything because that’s what you’re faced with every day, all day. So I had to spend time to familiarise myself with South African health conditions and with TB and HIV, because we didn’t cover them in depth in Cuba.”

He said South Africa has comparatively far fewer doctors and quality health facilities than Cuba. Although Zithulele Hospital can call for a helicopter to transfer severely ill patients, it does not have its own ambulance. So it is a “lengthy process” when patients have to be transferred to Mthatha: it can take up to 12 hours to happen, or it does not happen at all.

“People quite literally die here because of the lack of ambulances. Sometimes the ambulance does not even come. If you have a patient that urgently needs to be admitted to an intensive care unit, which we don’t have here, it’s really frustrating.” But Motlhabane is far from the demotivated public-sector doctors who have become clichéd characters in South African health reporting.

“Me? Hopeless?” he said. “How can I have no hope when I was born of hope?” Motlhabane said: “It makes me feel great to serve Zithulele’s people. They’re extremely grateful for the hospital and to help them makes me feel like a better person. I’ve made up my mind — I want to specialise in rural medicine. Even when I move on from Zithulele, it will be to another rural hospital.”

Motlhabane is, however, “disappointed” that he’s the only one of four siblings who’s managed to break the cycle of poverty and accompanying hardship that’s endemic in much of South Africa, and especially in the former Transkei.

“My brothers and my sisters are clever. But I’m the only one with a tertiary education, because they did not have any money to study. Every day I am grateful that I got a scholarship, but they weren’t so lucky,” said Motlhabane. “The day that I graduated I asked all of them if they wanted to study, because I was in a position to pay for them. But it was too late. They said they were too old to go back to school.”

But he’s adamant that “it’s not too late” for many young people in Zithulele district.

“I now want to help the youngsters from here to rise above their circumstances by inspiring them to finish their education. I tell them to have dreams and visions, because that’s a very important part of life — to have something to aspire to. How you will achieve this can come later—”

It was his mother’s dream that helped form Motlhabane’s life. And her words, as she outlined her vision for her son, still echo through the doctor’s life. He continues to feel her presence. “In a way, my mother is still holding me like she did when I was a little boy.”