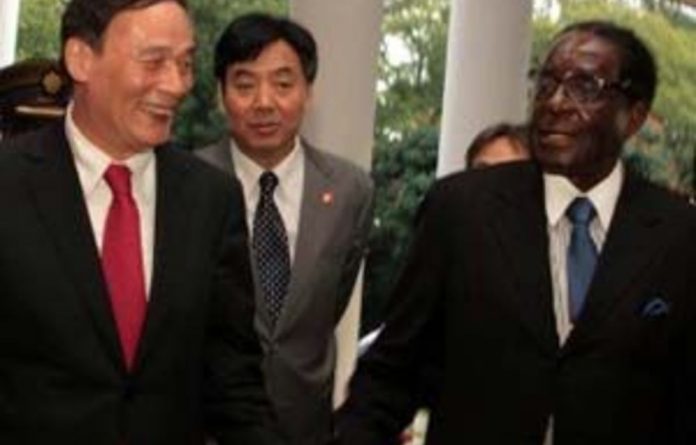 In the evening gloom the vast complex emerges into view. Beyond a high security wall, insects dance in the beam of a giant floodlight. Men are still hard at work in the skeletons of concrete tower blocks and standing at the centre of it all is the arch of a Chinese pagoda.

Zimbabwe’s national defence college is under construction within a sprawling, heavily guarded compound, the brooding presence of which sends a clear message to any would-be revolutionary. Some have dubbed it the “Robert Mugabe national school of intelligence”.

The construction site north of Harare has also become the lightning rod for another source of simmering resentment — Chinese labour practices.

Surrounded by a perimeter wall that runs for a kilometre through what was once farmland, the shadowy military academy is being built by a Chinese contractor whose managers are accused of meting out physical punishment, miserable conditions and meagre pay.

“The beatings happen very often,” said a 28-year-old carpenter, wearing blue overalls as he made the long walk home after a 14-hour shift. “They ill-treat you and, if you make a mistake, they beat you up.”

He estimated that there are about 600 Zimbabwean and 300 Chinese workers on the site. Around 50 of the Chinese are managers. Some Chinese people have “nice homes inside”, and others live in wooden shacks just outside the complex. The Zimbabweans and Chinese rarely mix, he said. “They don’t speak English so we use sign language. The Chinese eat off plates, then give us the leftovers.”

The carpenter said he gets up at 4am and works from 7am to 9pm every day. For this he is paid $4 a day, but at least it is work so he can feed his wife and three children. “We don’t have a choice because we need to survive. But if it was possible to chase all the Chinese away, I would.”

Reports of abuse by managers at the Chinese contractor, Anhui Foreign Economic Construction Company, are widespread, as are complaints that the government is turning a blind eye because it cannot afford to lose such a valuable partner.

“We tried to go on strike but the leader was beaten up and sacked. The government doesn’t say anything, even though it knows people are beaten up. I saw them undress some workers and beat them with helmets,” a builder said.

“We feel angry but we need money, so there is no choice. If you don’t work 10 hours, there is no money.”

Attempts to contact the contractor by telephone and email were unsuccessful. The company’s website refers to projects in Côte d’Ivoire, Mozambique and Zambia and describes how the project team of the Zimbabwe national defence college raised money for a carpenter whose son needed treatment for leukaemia.

Zimbabwe received a Chinese loan of $98-million to build the college. The loan will be repaid over 20 years through earnings from the Marange diamond fields, which are being mined by another Chinese firm amid widespread claims of human-rights violations.

Okay Machisa, director of the Zimbabwe Human Rights Association, said: “Parliament approving such a debt without consulting Zimbabweans is very serious. Why are we prioritising an army intelligence college instead of universities and hospitals?

“Harare has no electricity most of the time and the water is not good for human consumption. It shows we are trying to keep Zimbabwe under the control of state security.”

China’s commercial empire has expanded enormously in Africa in the past decade and Zimbabwe is trying to catch up. Trade between the two countries stood at $550-million last year, according to the Chinese embassy. The government in Harare has also announced that China is planning up to $10-billion in investments in the next five years.

Diamonds and other mineral resources are the main attraction, but Chinese entrepreneurs have also seized opportunities in construction, manufacturing and retail. Chinese restaurants are booming, attracting top politicians and businessmen. Shops are flooded with cheap Chinese imports, or zhing-zhong, of dubious quality. Zimbabwean vendors claim they are being undercut and put out of work.

Just as a recent Human Rights Watch report alleged poor conditions at Chinese-run copper mines in neighbouring Zambia, so there is growing antipathy and mistrust in Zimbabwe. Trade unions have called for action and even members of Mugabe’s Zanu-PF party have expressed disquiet.

Machisa said: “We’ve got alarming, shocking human-rights abuses in firms operated by the Chinese. We’ve got empirical evidence that is going to shock the people of Zimbabwe. They are physically abusing the workers. They are psychologically terrorising the workers.”

Others believe the problem is a cultural misunderstanding. A Chinese immigrant, Li Chen, said: “If Chinese people work from 8am till 8pm they have no problem. “It’s a different culture. If people sit down and talk and understand each other, it should change.”


Sudan 2000: Despite pressure from human rights groups, the Chinese drill for oil in the country.

Zambia 2006: Chinese foremen are accused of shooting miners in a wage protest in Chambishi; their managers blame the police.
Democratic Republic of Congo 2007: A $9-billion deal leads to a backlash on the lack of transparency and terms in China’s favour. After international pressure, the deal is amended in 2009 to $6-billion.

Niger 2008: Tribes in the uranium-rich north protest against the transfer of a French firm’s monopoly to a Chinese rival, saying they are entitled to a bigger slice of the wealth.

Guinea 2009: Troops fire on pro-democracy supporters, killing more than 150. As the world condemns the atrocity, China gives the junta an oil and mineral deal.

Zambia 2011: Human Rights Watch alleges that Chinese copper mines are breaking the law on safety, unions and hours. President Michael Sata pledges to stand up to the Chinese.

Zimbabwe 2011: Chinese firms are accused of rights abuses in the diamond fields, but the export ban imposed by the Kimberley Process watchdog is lifted. —