Clijsters bows out of semifinals with injury 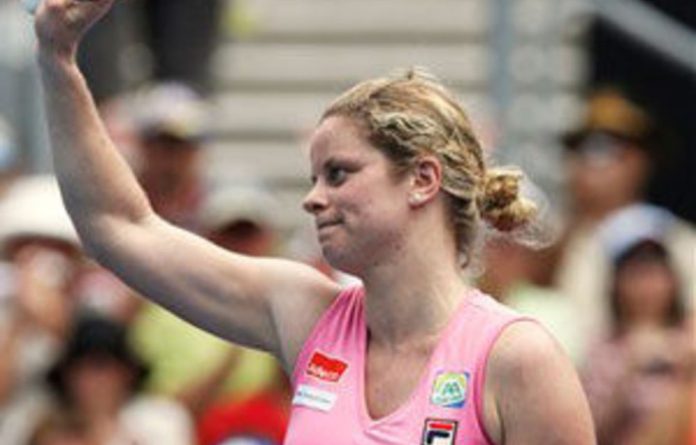 Australian Open champion Kim Clijsters retired from her semifinal match against Daniela Hantuchova at the Brisbane international on Friday — one game after taking a medical time out for a left hip injury.

Clijsters won the opening set 7-6 (4) but surrendered a break at the start of the second set and needed treatment after the third game. She came back on court for one game before walking to the net and telling Hantuchova she couldn’t continue after falling behind 3-1.

Hantuchova has had an abbreviated run into Saturday’s final, getting a walk-over in the quarterfinals when 13-time Grand Slam winner Serena Williams withdrew from the tournament after injuring her left ankle while winning a second-round match.

Clijsters struggled with injuries last season and only played eight tournaments, including the win at the Australian Open which helped her return to the number one ranking for one week.

The Brisbane international was her first tournament since an abdominal injury ended her season in September and the latest injury casts doubt on her ability to defend her title at the first major of 2012. The Australian Open starts on January 16 in Melbourne.

The 28-year-old Clijsters, who has won three Grand Slam singles titles since returning from time out of the game to have a baby in 2008, said she was hopeful that medical scans on Saturday would give the all clear to compete in Melbourne.

‘Good feeling’
She said her hip had started to go into spasms during the match and she withdrew to avoid a serious rupture.

“I do have a good feeling” about the Australian Open, she said.

In the men’s quarterfinals, top-seeded Andy Murray shifted up a gear in a 6-2, 6-2 win over Marcos Baghdatis.

Murray dropped the opening sets in his first two rounds as he overcame soreness and stiffness from the off-season but had no serious difficulty dispatching doubles partner Baghdatis in little more than an hour.

Murray, who has lost the last two Australian Open finals and has recently hired Ivan Lendl to help him break his Grand Slam title drought, will next play eighth-seeded Bernard Tomic.

The Australian teenager, a quarterfinalist at Wimbledon last year, converted the only break-point chance of his quarterfinal to beat Dennis Istomin of Uzbekistan 6-3, 7-6 (4).

Murray saved both break points he faced against Baghdatis, the 2006 Australian Open runner-up, and converted all four of his own.

Off guard
After a difficult service game to hold in the fourth game of the second set, Murray broke in the fifth to take a 3-2 lead.

He earned triple break point two games later after a scrambling rally which included a shot between his legs that caught Baghdatis off guard and secured a 5-2 lead on the next point when he successfully challenged a baseline call.

Murray has lost three major finals and is desperate to end a drought for British men in Grand Slam singles that dates back to 1936. Lendl, an eight-time Grand Slam titlist, arrived in Australia from the United States on Friday and was due to meet up with Murray in Brisbane on Saturday to start fine-tuning for the Australian Open.

“The Australian Open has always been the tournament that I’ve done my best at since I was young,” said Murray, who has overcome the groin strain that curtailed the end of his 2011 season. “So I look forward to going back there and hopefully go one better than last year.”

The number 42-ranked Tomic has played Novak Djokovic, Roger Federer and Rafael Nadal, so has a good idea of what to expect from number four-ranked Murray in the semi-finals.

“Tomorrow will be a test for me to see where I am,” Tomic said. “I am ready. I know I can take sets off these guys. In a best-of-three match like this … maybe I can pull off a win.” — Sapa-AP