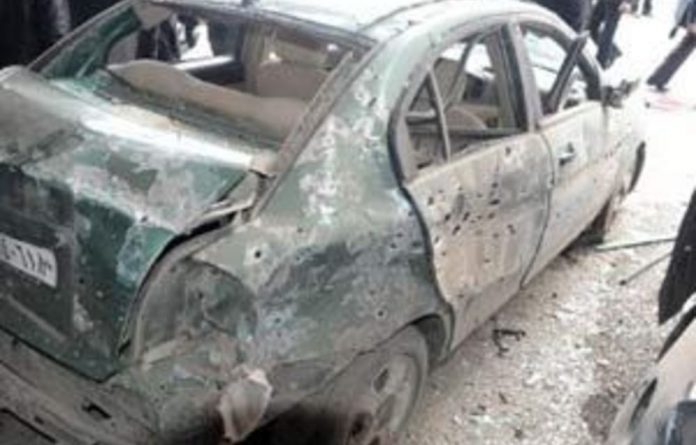 A suicide bombing hit Damascus on Friday, killing 25 and wounding dozens of mostly civilians, state media said, blaming “terrorists” for the second such attack on the Syrian capital in two weeks.

State television said the “powerful explosion” struck in the historic Midan quarter in the heart of the capital.

The attack, which took place in a heavily populated neighbourhood near a school, killed 25 people and wounded 45 others, the station said, adding the casualties were mostly civilians and also some security personnel.

It showed gruesome footage of rescuers gathering body parts in the streets and placing them in plastic trash bags, in an area where damaged cars and buses could be seen splattered with blood.

Angry residents were at the scene shouting and denouncing the bombing as the work of “terrorists”.

The Local Coordination Committees, an opposition activist group which has organised anti-regime protests since March, said in a statement that another explosion was heard in the Damascus suburb of Tal.

Bloodshed
The powerful December 23 bombings sparked a swirl of claims and counter claims over who was responsible, with the authorities saying they were likely the work of al-Qaeda and the opposition pointing a finger at the regime.

The latest attack came ahead of mass protests called by pro-democracy activists to demand an Arab League observer mission, in Syria for two weeks, admit its failure to stem nearly 10 months of bloodshed and hand over to the United Nations.

A team of Arab League observers has been in Syria since December 26 trying to assess whether President Bashar al-Assad’s regime is complying with a peace accord aimed at ending its deadly crackdown on dissent.

Fifty thousand people took to the streets of Douma, on the northern outskirts of Damascus, said the LCC and the Syrian Observatory for Human Rights, which reported massive demonstrations in northern Idlib province.

According to the LCC, protests were also underway in Syria’s second city Aleppo as well as central Hama, the port city of Latakia and Daraa in the south, where security forces fired tear gas to disperse them.

The “Syrian Revolution 2011” group, one of the driving forces on the internet behind the uprising, had called on Facebook for demonstrations on Friday to urge the “internationalisation of our cause”.

Scathing criticism
The appeal for people to take to the streets following the main weekly Muslim prayers comes ahead of an Arab League meeting on Sunday to discuss the mission which has come in for scathing criticism this week.

The head of the rebel Free Syrian Army has called on the Arab League to admit the mission has been a failure and urged the bloc to seek UN help to end the bloodshed.

Colonel Riyadh al-Asaad said: “We hope they will announce that their mission was a failure.

“We call on the Arab League to step aside and let the United Nations take over responsibility as it is more apt to find solutions.”

Asaad charged that the government was misleading the monitors and using all means to circumvent the deal it signed with the League.

“Authorities, for example, transferred prison inmates to army barracks where the observers are not allowed according to the protocol,” said the dissident colonel.

“Military vehicles are painted blue and identified as ‘anti-terrorist police’ to make believe that it’s the police” who are battling what the regime calls “armed gangs”.

‘Practical measures’
“We, and all the Syrian people, want the UN to step in because the Arabs are not capable of taking any real decisions when it comes to Syria,” said Asaad.

The UN estimates more than 5 000 people have been killed in the crisis since March, and the Syrian Observatory for Human Rights said regime forces killed another 17 civilians on Thursday alone.

A UN spokesperson said Ban and the sheikh “discussed practical measures by which the UN could support the observer mission of the Arab League in Syria”.

Syrian opposition groups have criticised the monitors and accused the authorities of keeping them under too tight a rein.

The Local Coordination Committees say at least 390 people have been killed since the observers began their mission. — AFP