Malema hogs the limelight in Mangaung 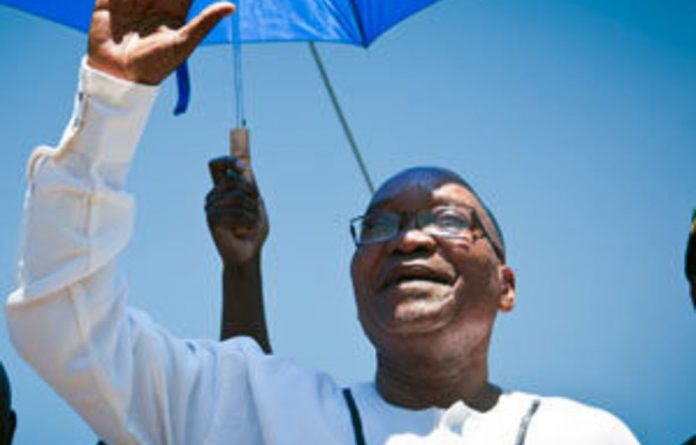 The ruling party’s 100-year celebrations kicked off with a golf day and a walk-about by ANC President Jacob Zuma on Friday but controversial youth league leader Julius Malema was likely to walk away as newsmaker of the day.

While Zuma went on door-to-door visits in Botshabelo in the Free State’s Mangaung municipality — after he cancelled a trip there on Thursday — Malema, who would not be allowed to speak at the main event on Sunday, was holding a “mini rally” in neighbouring Thaba Nchu.

Here, his supporters again mocked their ANC leader with the “shower head” song, referring to Zuma’s 2006 rape trial when he said he took a shower to prevent getting Aids.

Malema also said one of his biggest dreams was to see white domestic workers. Whites controlled everything from means of production, mines, banks and even labour, he said.

“That must change. We want to find in the next 10 years, white domestic workers,” he said to deafening applause from locals who packed the Moroka High School’s hall.

Malema was quick to add that the call for “economic freedom” should not be viewed as a way of excluding whites.

“We never said they must be sent to sea. We just want to share the cake.”

In Botshabelo, Zuma promised locals that running water would be installed in the township in March. He also put a councillor on the spot, demanding that she explain to an old man why he did not have running water.

Disappointment
The ANC government has had to deal with many service delivery protests in the past.

Zuma had been expected to visit sites in Bloemfontein but supporters turned away disappointed when the visit was cancelled. ANC national executive committee member (NEC) and Health Minister Aaron Motsoaledi turned up instead, addressing a small crowd on the history of the party and the celebrations, which 46 heads of state were expected to attend.

Motsoaledi said Zuma was very busy and had to meet with prime ministers and heads of state.

It became clear on Friday that former president Nelson Mandela (94) would not attend. Neither would Zimbabwe’s president Robert Mugabe, according to news agency Agence France-Presse, quoting state media.

The city of Bloemfontein was adorned with posters in the ANC’s green, black and yellow. Contractors were busy erecting tents and stages for the celebrations.

The Thaba Nchu youth sang, before Malema arrived: “Malema pray for us we are suffering. The shower man is giving us problems.” Another song was in praise of ANC NEC and Sports Minister Fikile Mbalula.

Unperturbed
The youth league wanted him to replace ANC secretary general Gwede Mantashe at the party’s elective conference in Bloemfontein in December.

Mbalula, in an interview with Business Day on Friday, said: “We need to guard against complacency, the thinking that the masses will always be on our side.”

Malema, who is appealing his suspension from the party last year for ill-discipline, said he was unperturbed by his not being given the podium along with Zuma on Sunday.

“I am not here to speak … President Zuma will speak on behalf of all of us. He was elected, whether we like him or not,” he said.

On Friday, the ANC’s military veterans in KwaZulu-Natal called on the youth league to respect the celebrations.

While Malema was addressing his mini-rally, high profile party members spent the morning working on their swings at the Schoeman Park golf club in Bloemfontein.

“This [the golf tournament] is a good way to show commitment to the celebrations as well as the ANC. This is what your presence [here] is really about,” ANC chairperson Baleka Mbete said. — Sapa