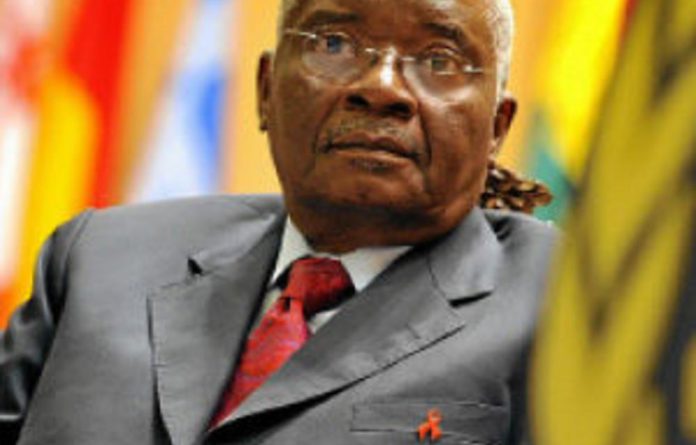 Guebuza has wide-ranging Mozambican interests in the banking, telecommunications, fisheries, transport, mining and property sectors, among others. Critics complain that, as president, he makes critical decisions about economic matters that have a direct bearing on his business activities.

Known in Mozambique as “Mr Guebusiness”, he has also entered into lucrative partnerships with Indian, Chinese, Dutch and Bermuda-registered companies. His most important South African connection is an interest in Trans African Concessions, the company that operates the crucial N4 toll route between Pretoria and Maputo.

Guebuza is on the board of Cornelder, the company that manages the Beira and Quelimane ports. He is also a shareholder in South African cellphone company Vodacom’s Mozambique subsidiary through Intelec Holdings, a sprawling group that administers the president’s investments.

The group has started a consulting company called Intelec Business Advisory and Consulting, in which a Mozambican resident of Cape Town, Tania Romana Matsinhe, has a 35% stake and serves as chief executive. Among its other shareholders is Guebuza’s son, Armando, with a 12.5% stake. Matsinhe served as economic adviser to the Mozambique minister of planning and development and also sits on the board of 1Time airline.

One of Guebuza’s business front-men, Intelec director Salimo Amad Abdula, has links to chalk-mining operations in Mozambique and picked up a 15% stake in Elephant Cement Moçambique in May last year. This makes him a partner of Indian cement manufacturer Shree Cement, which holds the rest of the shares in Elephant Cement.

The family member with the widest range of business interests is Guebuza’s youngest daughter, 31-year-old Valentina, who already has several directorships under her belt and a growing list of companies linked to her name.

Valentina has a 2.5% stake in the consortium, the three main shareholders of which are Bermuda-registered company Seaboard Moz Ltd (32.5%), state-owned port and railway company Portos e Caminhos de Ferro de Moçambique (15%) and Cornelder de Moçambique (15%). She is also believed to be a shareholder in Cornelder.

The network of family members that dominates the Guebuza empire also includes José Eduardo Dai, who has partnered Valentina in a range of enterprises. In 2008 the pair joined forces with Carlos Salvador, a Mozambican businessperson with interests in South Africa, in launching computing and telecommunications firm Orbttelcom.

In the same year José Eduardo Dai, Valentina and Mussumbuluko created mining company Dai Servicon Limited. In 2009 they featured as directors in the newly formed import-export company Mozambique Investment and Development Limited, again after its rules were structured to accommodate the two members of the president’s family.

Valentina is also joint owner of Imogrupo, which has interests in real estate, engineering, construction, hospitality and tourism. She has an interest in Maputo’s Tunduro Botanical Gardens, which are being rehabilitated with municipal funds.

Valentina is chief executive of Chinese-owned TV company StarTimes, which has a joint undertaking with the Guebuza-owned Focus 21 to digitise public broadcasting. There was no public tender for the contract.

Guebuza’s oldest son, Armando, has a degree in architecture from a South African university. His name appears among the directors of seven registered companies in Mozambique. With South African and Angolan partners, he registered a company last year called Billion Group Moçambique, which has interests in mining, energy, construction and public works. It appears to be part of the Bongani Investment Holdings empire — a Christian business network that has close links with South African President Jacob Zuma. Its chief executive, Alph Lukau, is the pastor who officiated at the lavish wedding of Zuma’s daughter Duduzane last year.

Guebuza’s other son, Mussumbuluko, with siblings Armando and Valentina, is the Maputo representative of Christian Bonja, a Lebanese company owned by Michal Mansou, who is well known in the Middle East and Europe for handmade Lebanese jewellery and Swiss watches.

Linked to four undertakings by the companies register, Mussumbuluko is on the board of Intelec.

Guebuza’s oldest daughter, Norah, has also entered the field after her father again amended company rules in 2005 to allow her to become a Focus 21 director. She joined forces with Zimbabwean and Mozambican partners to launch the firm MBT Construçoes Lda, specialising in construction and public works, at the beginning of last year.

Guebuza’s nephew, Miguel, launched his business career in 1993 by partnering Guebuza in a furniture and import-export company, Venturin. Miguel is a director in the construction consulting company Englob-Consultores Lda, in which one of his partners is Tendai Mavhunga, Guebuza’s son-in-law.

Miguel was recently appointed to the board of newly formed Mozambique Power Industries, a South African-based concern that plans to manufacture and market electrical transformers. Its shareholders include South Africans Wilhelm François Jacobs and Christoffel Cornelius Koch. He is also a shareholder in Vodacom Moçambique.

In 2005 he partnered Dimitrios Perrevos, who has business interests in South Africa, in launching an electrical undertaking called Luminoc. Perrevos, who appears to be Angolan, was a shareholder in the ill-fated Angolan diamond-mining interests pursued by the late Brett Kebble.

The other Guebuza nephew, Daude, has interests in the property, construction, hotel, heavy sand and oil sectors, among others. In 2000, with Guebuza, he launched courier company New Express.

Daude is a partner with another South African, Oded Besserglik, in a waste-disposal company, Wasteman Mozambique. Besserglik, an Israeli who moved to South Africa during the apartheid era, has more recently had several business connections with Zulu King Goodwill Zwelethini and members of his family.

The dangers inherent in President Armando Emilio Guebuza holding the reins of government while presiding over a private business empire were thrown into harsh relief by a public-transport contract of the Mozambican government.

In July last year the weekly newspaper Canal de Moçambique reported that the Mozambican government had bought 150 gas-powered buses through a state investment corporation, the Transport and Communications Development Fund, for the use of the Maputo municipality. The trouble is that the buses were manufactured by the Indian group Tata and supplied by its local subsidiary, Tata Mozambique, in which Guebuza has a 25% stake.

According to fund executive director Luis Mula, the transaction was worth R161.4-million.

Canal de Moçambique reported that the contract did not go out to international tender, which is a requirement of Mozambique’s procurement law.

From September 29 to October 4 2010 Guebuza travelled to India on a state visit. His delegation included Mozambique’s ministers of foreign affairs, interior, mineral resources and transport and communications.

In 2003 he visited India as minister of transport and communications.