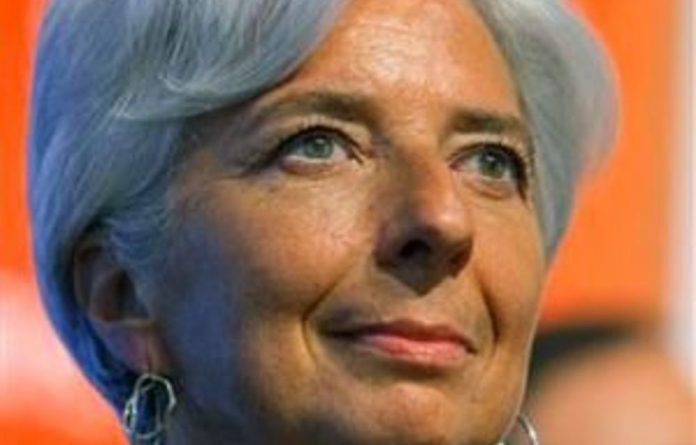 IMF Chief Christine Lagarde has met with President Jacob Zuma on Saturday, wrapping up a visit to South Africa in which she warned that the global growth outlook is likely to be lowered.

The International Monetary Fund (IMF) head met Zuma in the central city of Bloemfontein on the sidelines of celebrations for his ruling African National Congress’s centenary.

“It was a private meeting,” said Treasury spokesperson Bulelwa Boqwana, adding that no details were available. Presidential spokesperson Mac Maharaj, however, confirmed that “President Zuma raised a concern that Europe had taken long to solve its problems and how the impact of this was felt by developing countries like South Africa”.

Maharaj said Lagarde had commended the measures that South Africa had put in place to address youth unemployment as well as to address the environment conducive to increase investments.

On Friday, Lagarde cautioned that the eurozone debt crisis was taking a toll on Africa and the rest of the world, with the IMF set to release a report around January 25 that is likely to lower the global growth forecast from the 4% estimated in September.

“We should clearly prepare for a 2012 that will not be a walk in the park, that will not be an easy journey, but will be one of effort and focus on a combination of issues — the first one, the European crisis and its resolution.”

South Africa fell into its first recession since the fall of apartheid during the 2008 global financial crisis.

While the recession lasted only nine months, the country has struggled to boost its growth rate to levels that the government says are needed to make a dent in a 25% unemployment rate that keeps 38% of the population living in poverty. — Sapa-AFP