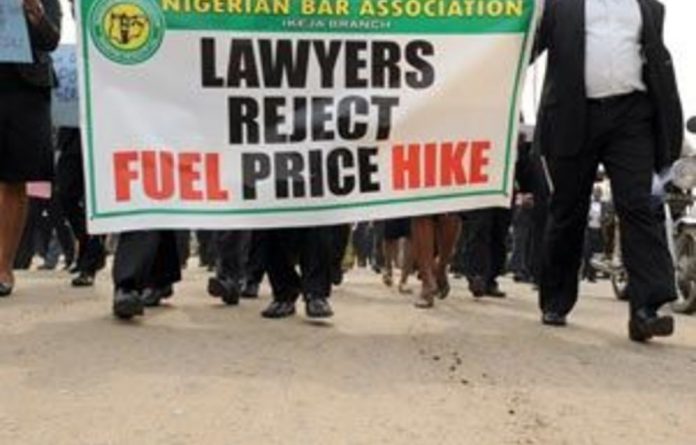 Hundreds of people fled their homes on Saturday in northeast Nigeria after deadly all-night gun battles between Islamists and security forces, police and residents said.

The latest clashes with the Islamist sect Boko Haram came amid growing fears of wider religious violence in Africa’s most populous nation, roughly divided between a mainly Muslim north and predominantly Christian south.

The previous night, 10 people were gunned down in a church, the latest such attack in an escalating wave of violence since Christmas Day bombings of churches and other targets killed scores of people.

Police said after the overnight fighting in the north-eastern town of Potiskum, where the Islamists attacked a police headquarters and robbed and burnt two banks, that they had not yet determined the death toll.

“Our men engaged Boko Haram gunmen in shootouts for most of the night, which led to some deaths and injuries,” Yobe state police commissioner Lawan Tanko said. “It is too early to give figures because we are still investigating the incident.”

Emergency rule
Dozens of soldiers were deployed on Saturday and took up positions around the police headquarters, firing sporadically.

The town is part of a region placed under emergency rule by President Goodluck Jonathan a week earlier.

Dozens of Islamists stormed Potiskum and launched gun and bomb attacks on the police headquarters. They also threw a bomb into a nearby police barracks but no-one was hurt, according to residents.

People in nearby neighbourhoods fled their homes in fear of military raids in the aftermath of the attack, they said.

“Virtually all the residents have fled their homes for fear of attack by soldiers who came to the town this morning,” said Idris Bakanike, a resident of the Dogo Tebo area near the police headquarters.

Soldiers accused of raids
“We are afraid the soldiers will raid and burn our homes like they do in Maiduguri each time Boko Haram [attacks],” said local resident Amiru Umar.

Soldiers in the north-eastern city of Maiduguri have been accused of burning homes and shooting residents after attacks by the Islamists, accusing residents of complying with them.

Nigeria has been convulsed by a recent spate of attacks.

A Christian rights activist and a hospital source said 10 people were gunned down inside a church on Friday evening in downtown Yola city, the capital of Adamawa state in north-eastern Nigeria.

Earlier on Friday, over a dozen other Christians were shot dead in Mubi town in the same state. It was the deadliest attack in the region in the wake of an ultimatum last Sunday by Islamists for Christians to leave the north.

Daytime attack
Five people opened fire on Christian Igbos at a house in Mubi in a daytime attack as they mourned the death of a friend shot the night before.

Residents and a relief official reported up to 17 dead, while police said 12 were killed, with between two and five people killed the previous night in the same town.

On Thursday evening, gunmen stormed a church in the north-eastern city of Gombe and opened fire as worshippers had their eyes closed in prayer, killing six people, including the pastor’s wife.

He also said a state of emergency declared in hard hit areas last weekend by President Goodluck Jonathan would not stop the sect.

Christians will defend themselves
“We are extending our frontiers to other places to show that the declaration of a state of emergency by the Nigerian government will not deter us … We can really go to wherever we want to go.”

Boko Haram is a shadowy group believed to have a number of factions with differing aims, including a hard-core Islamist faction.

It launched an uprising in 2009 put down by a brutal military assault which left some 800 people dead.

Since the group re-emerged in 2010, it has been blamed for increasingly sophisticated and deadly attacks, including an August suicide bombing of UN headquarters in Abuja that killed 25.

On Christmas Day, a wave of bombings killed 49 people, most of them outside of a Catholic church as services were ending, triggering intense fear and outrage in Africa’s largest oil producer.

There have been fears of reprisals from Christians, and Christian leaders have warned they will defend themselves if attacks continue.

Adamawa state government secretary Kobis Ari has confirmed in a statement that following attacks in some parts of the state, the government has imposed a 24-hour curfew. — Sapa-AFP

Aminu Abubakar
Aminu Abubakar is a journalist based in the northern Nigerian city of Kano, where he grew up. He worked for local newspapers before joining Agence France-Presse (AFP) in 2000 as a freelance correspondent covering northern Nigeria.
Facebook
Twitter
WhatsApp
Linkedin