ANC centenary the scene of pomp and ceremony 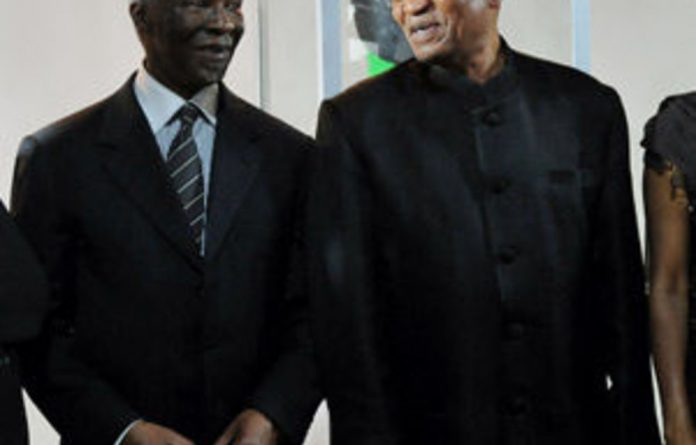 ANC centenary celebrations continued into the early hours of Sunday morning ahead of the historic January 8 statement in Bloemfontein.

It was a blend of pomp and ceremony interspersed with dancing in the streets as ANC leaders, veterans, supporters and invited dignitaries celebrated the party’s 100-year anniversary.

Events were held across the city and surrounding areas throughout Saturday.

While officials prepared to entertain visiting heads of state, ANC veterans and leaders at an extravagant gala dinner, the party for the members was happening in the townships.

The dinner, held at Vista University entertained the who’s who of the African liberation struggle.

Paying homage
President Jacob Zuma sat alongside several other African heads of state in front of the stage — separated from other guests.

“This is going to be an evening of celebration. Free flowing and relaxed with many speakers paying homage to the ANC,” master of ceremonies and senior ANC leader Cyril Ramaphosa told guests.

Former Zambian president Kenneth Kaunda received a warm welcome, earning a standing ovation as he made his way to the stage.

“Let’s congratulate South Africa for a job well done on their freedom. The ANC brought this country’s people into a new dawn,” Kaunda said.

Uganda President Yuweri Museveni labelled the ANC centenary as “an achievement for the entire African continent”.

“South Africa may have been the last African country to win freedom but you’ve brought stability to the continent,” Museveni said.

“We didn’t know we were making history during the struggle for liberation. The ANC’s achievements gave courage to the rest of Africa’s liberation struggle,” Pohamba said.

Staying the course
ANC veteran Ahmed Kathrada hailed the “hard-won victory” of the ANC’s liberation struggle, saying many great achievements had been made.

“We have achieved a lot of things but the most important thing is dignity. The whole of South Africa is free,” Kathrada said.

While speakers heaped praise on the achievements of the ANC, they were also mindful of the challenges still facing South Africa.

Pohamba maintained that “liberation is not enough” and all of Africa’s people “need to be freed from poverty”.

“We have to fight poverty and all its offshoots of hunger, ignorance, disease, crime, corruption and above all, exploitation of one mind by another,” Kaunda added.

In a veiled reference to the failure of other African leaders in tending their country’s challenges, Kaunda warned Zuma to “always negotiate and discuss” national issues as “two wrongs don’t make a right”.

Centenary Flame
Proceedings were interrupted when Zuma led a delegation to the historic Waaihoek church where the ANC was founded.

The Centenary Flame was lit and a formal service marking the centenary was observed.

Hymns were sung and prayers were made inside the packed church where several heads of state and senior ANC leaders were in attendance.

During the service a candle was also lit in commemoration of all ANC presidents.

After the service Zuma led dignitaries back to the gala dinner.

The president officially ended proceedings at 3am.

“I thank you for sharing in this moment even though timing lost us a little bit. Let’s all go get a little rest before the proper celebrations,” Zuma said.

Streets of yellow, green and black
While the gala dinner wound down, ANC members not attending headed towards the city.

Across the streets of Bloemfontein people wearing the yellow, green and black of the ANC celebrated as loud music blared from car stereos as people danced and drank.

ANC high-rollers checked into a nightclub in the city centre. Former national police commissioner Bheki Cele and Tony Yengeni were spotted at the club, booking out the VIP section, which was packed with provincial and national government officials.

Tributes
In London, British Prime Minister David Cameron on Sunday hailed the ANC as a “beacon for the world” in fighting discrimination and oppression.

“On behalf of the British people, I want to congratulate you and everyone involved with the [ANC] on this very special anniversary,” wrote Cameron in a letter to Zuma.

“It is incredible to see the changes in South Africa that the ANC has helped to bring about,” he said.

But there were also calls to address Africa’s challenges.

“I extend my sincere congratulations to the [ANC] and its leader, President Zuma, on reaching this impressive milestone,” Zille said in a statement.

“These 100 years show an extraordinary record, without parallel on the continent of Africa. If the ANC is saying this is much more than a celebration of the 100th birthday of a political party, we agree. It represents a history of progress, a quest for human rights and the advent of democracy after a long, arduous struggle that took over 80 years,” she said.

She said the values espoused by the father of the new South Africa, Nelson Mandela, still resonated strongly with the people of South Africa and his humane, non-racial vision of equality for all under a democratic system led the country out of the dark days of repression and put it firmly on the path to freedom.

However, the centenary event also called for introspection and reflection as without the values articulated by Nelson Mandela, the ANC also risked becoming a rudderless vessel, Zille warned.

Going to its roots
The party was founded on January 8 1912, as the South African Native National Congress. The country’s apartheid rulers banned it in 1960, jailing its leaders four years later.

It has dominated the political scene ever since, enjoying huge wins in every election.

But South Africans are increasingly frustrated over allegations of corruption and the government’s failure to spread the benefits of their political victory more broadly — 38% of the nation still lives in poverty.

Zuma has had to fight off allegations of corruption shortly before assuming power in 2009. Cleared of the charges, he is now struggling to rein in feuding factions inside the party.

Economically, the party has drawn praise for its economic management, rolling out new electricity and water supplies, as well as housing, and inspiring a new black middle class.

But it has failed to give the poor the benefits of the post-apartheid boom.

Critics say too many people have been left to make do with shoddy public hospitals and schools, a dangerously high joblessness rate of 25%, violent crime and a grim life in the shantytowns. — Additional reporting by Sapa