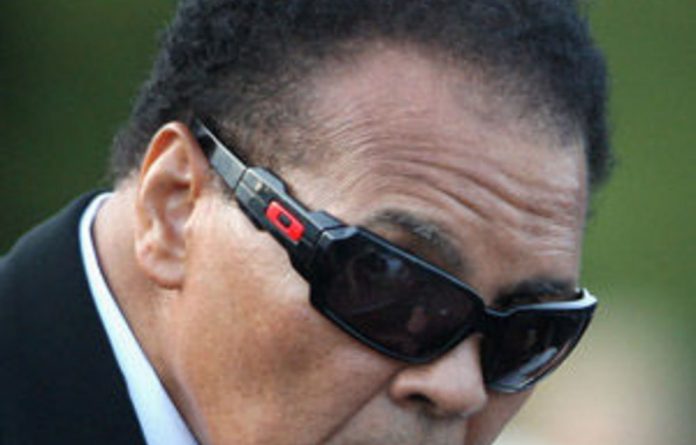 Muhammad Ali is returning to his former hometown of Louisville, Kentucky to celebrate a milestone — his 70th birthday.

The iconic heavyweight boxing champion will bask in the limelight once again at a private birthday bash on the evening of January 14 at the Muhammad Ali Center in downtown Louisville ahead of his birthday on January 17. The party will double as a fundraiser for the centre — a cultural and education complex that also features a museum focused on Ali’s long career as a boxer, social activist and humanitarian.

“Louisville was the first to support Muhammad in his pursuit of gold”, Lonnie Ali, the boxer’s wife, said in a statement on Saturday evening. “It is only fitting that Louisville and surrounding communities participate in this important celebration to mark his 70th birthday.”

Ali Center spokesperson Jeanie Kahnke said on Saturday that Ali will be surrounded by old friends and people who made a difference in his life, including his long-time trainer Angelo Dundee. The party will feature a dinner, entertainment and speeches.

She described it as a “retrospective look and celebration” of Ali’s life.

‘Global icon’
“It’s significant for anyone to turn 70 years old”, Kahnke said. “But for such a global icon, who has literally touched the lives of millions of people, it’s a momentous event to celebrate.”

Kahnke said that Muhammad and Lonnie Ali are looking forward to returning for the celebration. They have a residence in Louisville but have recently been staying at their home in Arizona, she said. Ali is battling Parkinson’s disease.

A series of community events — titled “Seven Days for Seven Decades” — will be offered from January 15 to 21 at the centre, touching on both the serious and fun sides of Ali.

“Community is an important part of Muhammad’s life”, Lonnie Ali said in her statement. “He was and is a master at building community around him.”

She noted that Ali has engaged community support in the US and around the world.

Community involvement
“In each community he visits, Muhammad involves people as stakeholders in his success”, she said. “He makes people feel important, worthy and good about themselves and their actions. Muhammad continues to involve everyday people in his daily pursuit of life. He draws people in and makes them feel welcome. His support of community causes and individual efforts [has] been a way of life.”

The week of events includes a “compassion fair” and workshops focusing on examples of compassion throughout the world. An exhibit will delve into the lives of people with dual African American and Native American ancestries. There will also be screenings of films based on Ali’s life.

On January 15, a magician will perform in the centre’s main lobby — recognition of Ali’s love of magic tricks. People visiting the centre during that week will also receive a discounted admission if they bring non-perishable food item donations for a food bank.

“We really want to thank the community that has supported and loved and embraced Muhammad,” Kahnke said.

Humanitarian awards
The centre opened in 2005 and draws about 85 000 visitors a year.

Born Cassius Clay, Ali began his boxing career as an amateur in Louisville in the 1950s and won a gold medal in boxing in 1960 at the Olympics in Rome. He went on to become a three-time world heavyweight champion. He first won the title by defeating Sonny Liston in 1964. Ali was then stripped of his boxing title in 1967 for refusing to be drafted for military service during the Vietnam War.

He regained the title in 1974 when he defeated George Foreman in Zaire. Ali’s last title came in 1978 when he defeated Leon Spinks. Ali had three epic fights against his chief rival, Joe Frazier.

Ali has received dozens of international awards for his humanitarian efforts. — Sapa-AP