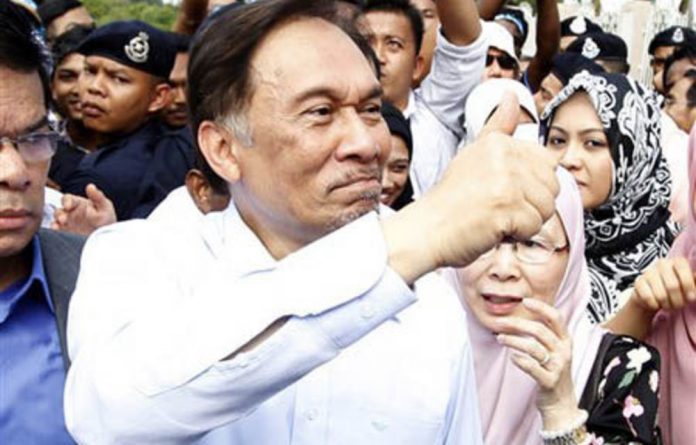 Malaysian opposition leader Anwar Ibrahim celebrated a surprising triumph over sodomy charges on Monday, pledging to focus his energies on toppling the government in elections expected later this year.

The Kuala Lumpur High Court acquitted Anwar of sodomising a male former aide, ruling that the prosecution’s DNA evidence was unreliable in a verdict that upended Anwar’s worst-case scenario of a 20-year prison sentence following a trial that polarised public opinion.

Prime Minister Najib Razak’s administration described the judgment as a repudiation of Anwar’s long-standing insistence that the government trumped up the sodomy charge and manipulated the judiciary to thwart his hopes to become Malaysia’s next leader.

Anwar said he was “pleasantly shocked” by the verdict, but remained convinced the case was politically motivated. “To assume the judiciary is independent is a bit far-fetched,” Anwar told The Associated Press.

Anwar was imprisoned for six years after being ousted as deputy prime minister in 1998 on charges of sodomising his former family driver and abusing his power. Sodomy, even consensual, is illegal in Muslim-majority Malaysia, but the law against it is seldom enforced.

He led a three-party opposition alliance to unprecedented gains in 2008 elections, but his future was thrown into jeopardy some months later when Saiful Bukhari Azlan, a 26-year-old former aide, accused Anwar of forcing him to have sex in an apartment.

Smear campaign
Government supporters insisted throughout the trial that the allegations proved that Anwar was morally unfit to lead. But opposition activists called it a smear campaign masterminded by Malaysia’s long-ruling coalition to cling to power.

The case hinged mainly on Saiful’s testimony and semen samples found on his body that investigators said matched Anwar’s DNA. The defence insisted Saiful’s claims were full of inconsistencies and that the DNA samples were mishandled.

High Court Judge Mohamad Zabidin Diah said he “could not with 100% certainty exclude the possibility that the (DNA) sample is not compromised.”

“The court is always reluctant to convict on sexual offences without corroborative evidence,” he said in an unexpectedly brief two-minute judgment.

More than 5 000 opposition supporters outside the court building cheered when they heard news of the verdict. Inside, Anwar’s wife and children wept and hugged him, while his friends burst into shouts of “Allahu Akbar,” or “God is great.”

Chief prosecutor Yusof Zainal Abiden said he had not decided whether to appeal the acquittal.

Police said that after the verdict was delivered, three small blasts caused by homemade explosives wounded five people on roads nearby. Officials had no suspects.

Information Minister Rais Yatim said the acquittal “proves that the government does not hold sway over judges’ decisions.”

Phil Robertson, deputy director of New York-based Human Rights Watch’s Asian division, said Anwar should never have been charged in the first place, adding that the case had been “politically motivated and plagued with irregularities.”

Saiful did not attend the hearing, but wrote on Twitter after the verdict that he would “remain calm, continue praying and be patient.”

Anwar was flying to India later on Monday for a speaking engagement and would also head to Turkey before returning home this weekend for his alliance’s national congress, in which the opposition is expected to plan its strategies for elections widely expected within months.

“I am confident, God willing, that we will win if the elections are free and fair,” Anwar said.

The opposition now has more than one-third of Parliament’s seats and hopes to win power by pledging to curb graft, racial discrimination and restrictions on civil liberties. Najib has announced high-profile measures recently to tackle those problems in a bid to ensure the political survival of his National Front coalition, which has governed since 1957. — Sapa-AP