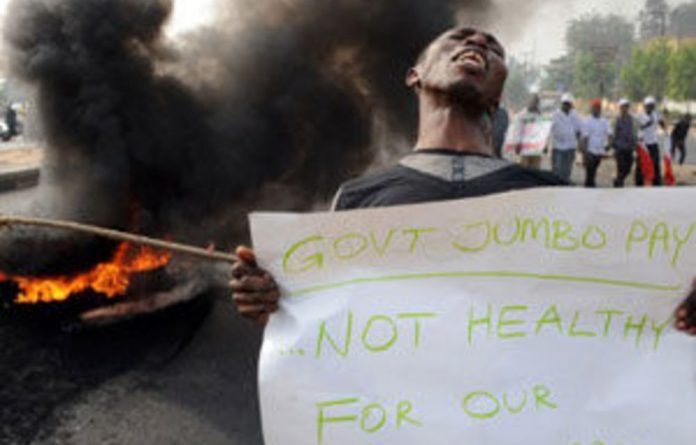 Six people were killed on Monday when Nigerian police and protesters clashed as tens of thousands demonstrated nationwide over fuel price hikes and a general strike shut down the country.

The launch of what unions called an indefinite strike came at a crucial moment for Africa’s most populous nation and largest oil producer, already hit by spiralling violence blamed on Islamist sect Boko Haram.

Tensions ran particularly high in Kano, the largest city in Nigeria’s north, when thousands converged on the state governor’s office, prompting police to push them back as they fired tear gas and shot into the air.

Also in Kano, two vans were set ablaze and protesters tried to torch the home of central bank chief Lamido Sanusi, but police stopped them.

The office of the secretary of the state government — its highest administrative officer — was also set ablaze, causing serious damage.

A Red Cross official said in the afternoon that 30 injured had been counted in Kano, including 18 with gunshot wounds. A hospital source said later that two of those shot had died.

The head of Nigeria’s human rights commission, Chidi Odinkalu, said a nine-year-old had also been reported trampled to death.

The government imposed a night time curfew on the city and it was unclear whether authorities would disperse thousands of protesters who remained at the city’s main square.

Curfew
A curfew was also slapped on the capital of northern Zamfara after some protesters smashed the windows of a church.

A witness said he saw police take away a man with a machete cut on his head.

In one of the killings in Lagos, a police officer was accused of shooting a victim. Police confirmed the death and said the officer was arrested.

Bonfires made of tyres burned along main roads as protesters marched past, with an estimated 10 000 or more converging at a designated location for a rally.

Protest leaders in Lagos were keen to avoid provoking police after authorities were accused of using excessive force against demonstrators last week and shooting one person.

‘Bad Luck Jonathan’
While the main group of protesters was largely peaceful, youths on the margins of the march set bonfires and threw bottles or stones. Some yelled “Bad Luck Jonathan” in reference to President Goodluck Jonathan.

“This is a peaceful demonstration,” said Ishola Adebayo, a teacher who took part in the Lagos march. “They cannot break our resolve to compel government to drop this anti-people policy.”

The strike was widely observed, particularly in Lagos, where the usually chaotic streets were empty apart from protesters, with shops, petrol stations and other businesses shut for the day.

Officials said oil output was not affected in a country that produces around 2.4-million barrels per day.

Nigeria’s main unions on Monday vowed to push ahead and condemned the shootings, alleging “the federal government unleashed its security machinery against the people”.

The strike came after the government’s deeply controversial move to end fuel subsidies on January 1, which caused petrol prices to more than double in a country where most of the 160-million population lives on less than $2 a day.

Transport costs have followed suit, sharply increasing the price of commuting and further effects were feared — especially on the cost of food.

Recent deadly attacks on Christians have sparked fears of a wider religious conflict in a country whose population is roughly divided between a mainly Muslim north and predominantly Christian south.

On December 31, Jonathan declared a state of emergency in hard-hit areas but the violence has only continued and spread to other locations.

Much of the country has been united in anger against the abandoning of fuel subsidies despite a strong push from Jonathan and his respected economic team to make their case for the move.

Nigerians view the subsidies as their only benefit from the nation’s oil wealth and lack any real trust in government after years of deeply rooted corruption.

The government has given no sign of backing down.

Economists say removing fuel subsidies is vital for the country to improve its woefully inadequate infrastructure and ease pressure on its foreign reserves.

The government says it spent more than $8-billion on subsidies in 2011. — AFP