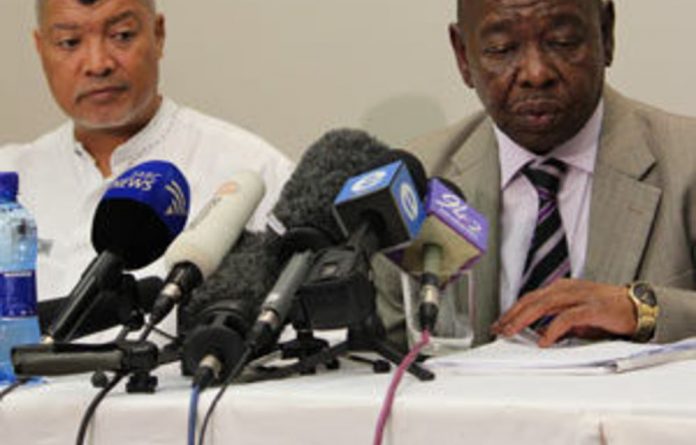 Higher Education Minister Blade Nzimande’s “wonderful problem” came back to haunt him on Tuesday when a woman was killed and 17 people injured in a stampede at the University of Johannesburg.

Speaking at a hastily convened press conference following the accident, Nzimande announced that the department would move to a “central application process” to alleviate problems regarding university registrations.

“We are considering discontinuing walk-ins at registration time at universities,” said Nzimande.

This was a far cry from the minister’s comments last year when he brushed off criticism of the large queues outside the University of Johannesburg (UJ), calling it a “wonderful problem”.

In a repeat of last year’s chaos, hundreds of matriculants queued outside the university once the matric results were released, some as early as Monday, seeking to submit late applications for study. But as the gates opened early on Tuesday morning, a stampede left one woman — the mother of a prospective student — dead and 17 other people injured.

However, Nzimande said that there would be no sanctions against the university as this was a national problem that would be rectified through centralising the application process.

“A lot of students don’t know what they want to study and it clogs up the applications and registrations,” he said.

Students who are declined entrance to degree courses return to the university to apply for diploma programmes, further compounding the problem.

Nzimande said: “Everyone needs to a play a role in educating students about the problems regarding registrations and applications.”

He admitted universities were unable to cope with the large number of those wishing to attend but said that university was not the only option for matriculants.

“At the moment we are sitting with 50000 vacancies at FET [Further Education Training] colleges with diploma programs students can follow.”

He said perceptions that university was the only way to succeed were inaccurate. “It would be very negative to say South Africa has lost faith in FET colleges.”

Poor quality FET
But Seamus Needham, research planning manager at the University of the Western Cape’s FET Institute, said: “College is definitely a second choice option for students despite the fact that it provides very real employment opportunities.

One factor discouraging students from studying at FETs is their poor reputation. There are 50 public FET colleges spread across 263 campuses across the country, catering to about 220000 students. There is a high need for education and training in the country — about 2.4-million youths between the age of 18 and 24 are not engaged in any form of education, training or employment.

But the Democratic Alliance’s spokesperson on higher education, Junita Kloppers-Lourens, said the sector was in a “dire state” and many of the colleges were “dismal”. “Quite a few of our colleges need to be placed under administration,” she said. “That’s the reason why pupils aren’t interested in going there.”

Education analyst Graeme Bloch agreed that the FETs were something of a “mixed bag”. “There are some very good ones but there are also some very appalling ones,” he said.

“Vocational study should be part of the options that you have after matric but the FET colleges are not very good, and they are also very full,” he said. In addition, he said, the throughput from FET colleges is even worse than that of universities.

Bloch said that there was “no quick fix” for the problem with getting students into tertiary studies. “There are simply not enough places for young people who want to get ahead,” he said.

Inarticulate education system
Another factor discouraging students from opting for study at FET colleges, is the poor articulation between high school, FET colleges and universities.

So a student who, for example, studied diesel mechanics at an FET college and wanted to follow this with a mechanical engineering degree would have to pick up their university studies at first year level.

“What would be useful is if these courses also provided meaningful routes into university study, should students choose that,” said Needham. This would make the courses more attractive to those who did not qualify for direct entry into university.

Wits University’s education policy unit director, Peliwe Lolwana, agreed, saying, “Most FET colleges tend to offer restricted curricula, which would not appeal to someone who had their heart set on studying subjects such as social science or law.”

Lolwana said it would be useful if colleges could offer an expanded curriculum that would lead to an “associate degree”. Such degrees, she said, are common in countries such as the United States, United Kingdom and India and provide advanced courses which would take the student partway through a university degree.

“This is where, as a country, we should be putting our resources for post-school opportunities,” she said.