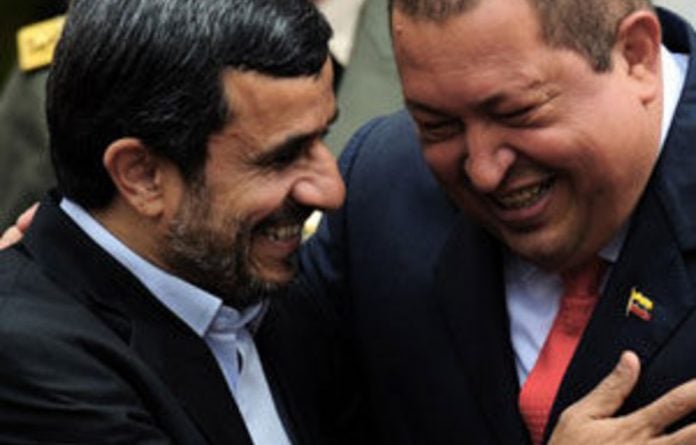 Iran has begun enriching uranium deep inside a mountain and sentenced an American to death for spying, angering the West and undermining hopes that diplomacy could avert further sanctions or war.

The start of enrichment at the Fordow bunker near the Shi’ite Muslim holy city of Qom was confirmed on Monday by an Iranian official in Tehran and by the Vienna-based International Atomic Energy Agency (IAEA).

Iran says its nuclear programme is purely non-military but the West believes it is designed to produce nuclear weapons.

The Islamic republic’s decision to carry out enrichment work deep underground could eventually make it much harder for US or Israeli forces to bomb, narrowing the time window for diplomacy to avert any potential attack.

The US state department called uranium enrichment at Fordow a “further escalation” of Iran’s “ongoing violations” of UN resolutions.

The European Union (EU) is expected to bring forward a meeting of foreign ministers due to decide on an oil embargo on Iran by one week to January 23. France called for measures of “unprecedented scale and severity” against Tehran. Germany and Britain also condemned it.

The death sentence for Amir Mirza Hekmati (28) an Arizona-born former US military translator with dual nationality, further riled Washington, which denies he is a spy and has demanded his immediate release since his arrest.

‘A big atomic bomb will come out’
The two moves come at a time when new US sanctions imposed over Iran’s nuclear programme are causing real economic pain. Tehran has responded with threats to international shipping that have frightened oil markets. A parliamentary election in two months is widening Iran’s internal political divisions.

Iran’s President Mahmoud Ahmadinejad and Venezuela’s Hugo Chavez mocked US disapproval and joked about having an atom bomb.

“Despite those arrogant people who do not wish us to be together, we will unite forever,” the Iranian leader told Chavez during a visit to Caracas.

“That hill will open up and a big atomic bomb will come out,” Chavez said of a grassy knoll near his palace.

On New Year’s Eve, US President Barack Obama signed into law by far the toughest financial sanctions yet against Iran, which if fully implemented could make it impossible for most countries to pay for Iranian oil. The EU, which still buys a fifth of Iran’s 2.6-million barrels per day of exports, is expected to announce an embargo this month.

Nuclear talks collapsed a year ago between Iran and the five permanent UN Security Council members plus Germany, known as the P5+1 group. Efforts to restart them have foundered over Iran’s refusal to negotiate over its right to enrich uranium.

The US and Israel say they are leaving the military option on the table in case it becomes the only way to prevent Iran from making a nuclear weapon.

Manipulating public opinion
Hekmati’s case is thought to be the first in which Tehran has passed a death sentence on a US citizen for spying. His family says he was arrested last August while visiting grandparents in Iran.

Iran has aired a televised confession — denounced by Washington — in which Hekmati said he worked for a New York-based video company designing games to manipulate public opinion in the Middle East on behalf of US intelligence.

“Amir Mirza Hekmati was sentenced to death … for cooperating with the hostile country America and spying for the CIA,” ISNA news agency quoted judiciary spokesperson Gholamhossein Mohseni-Ejei as saying.

“The court found him Corrupt on the Earth and Mohareb [one who wages war on God].”

The US urged Iran to grant Hekmati access to legal counsel and “release him without delay”.

“Allegations that Mr Hekmati either worked for, or was sent to Iran by the CIA are false,” a White House spokesperson said.

“The Iranian regime has a history of falsely accusing people of being spies, of eliciting forced confessions and of holding innocent Americans for political reasons.”

Humanitarian gesture
Hekmati’s execution could still be blocked by Iran’s highest court which must confirm all death sentences. Iran could “hold on to Hekmati and use him — as they have with previous foreign detainees — as a pawn in their rivalry with the US”, said Gala Riani, analyst at forecasting firm IHS Global Insight.

Three US backpackers jailed in Iran as spies in 2009 were freed in 2010 and 2011 in what Ahmadinejad called a humanitarian gesture. An Iranian-American sentenced to eight years for spying in 2009 was freed after 100 days.

A spokesperson for Mott Community College in Flint, Michigan, where Hekmati’s father works, said the family would not be commenting “because it’s a very tricky diplomatic situation”.

Hekmati had worked as a US military translator. Iran’s Farsi language is one of the two main tongues spoken in Afghanistan, and the US military often deploys Americans of Iranian origin there as translators.

Tehran says it is refining uranium to 20% purity to fuel a medical research reactor and that it has hidden nothing.

The West says uranium of 20% purity is not necessary for power plants and would be a big step towards the higher purity needed for a nuclear bomb. Western officials say Iran lacks the technology to use it in a medical research reactor.

Iran disclosed to the IAEA, the UN nuclear watchdog, in 2009 that it was building the facility beneath a mountain at Fordow but only after learning that it had been detected by Western intelligence.

Scramble to withdraw
After years in which economic sanctions had little effect, the latest measures against Tehran are causing real pain.

Oil buyers are demanding deep discounts from Iran, cutting the revenue it needs to feed its 74-million people. The rial currency has plunged and Iranians have scrambled to withdraw savings from banks to buy dollars.

Iran has remained defiant. In a televised speech on Monday, Supreme Leader Ayatollah Ali Khamenei said: “Sanctions imposed on Iran by our enemies will not have any impact on our nation. The Iranian nation believes in its rulers.”

Tehran has responded to the new sanctions by threatening to shut the Strait of Hormuz, the outlet for ships carrying oil from the Gulf, guarded by a huge US-led international fleet.

In a case apparently separate from Hekmati’s, Iran said on Monday it had broken up a US-linked spy network planning to fuel unrest ahead of a parliamentary election in March.

The election will be Iran’s first since a 2009 presidential vote whose disputed result triggered eight months of unrest which Iran’s rulers put down by force.

From Los Angeles to Paris to Tehran, opposition groups with little in common but an aversion to Iran’s clerical leaders is struggling to make gains from the escalation in sanctions.

The Iranian Green Democratic Congress said in Paris on Monday it aimed to create a national council incorporating a wide range of groups inside Iran by March to offer a “credible alternative” to the current government. — Reuters