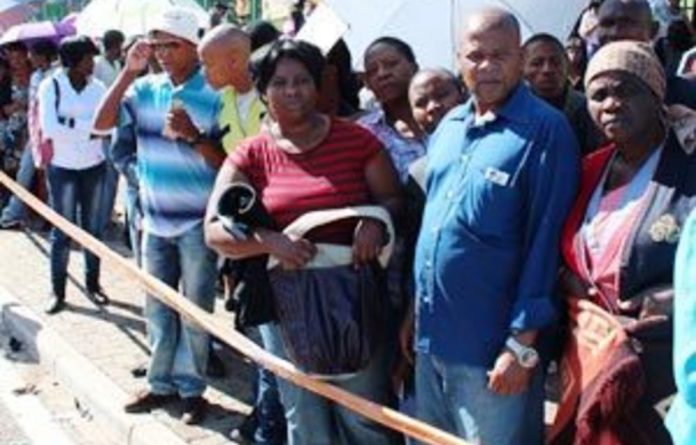 A desperate attempt to claim a place at university for her child ended in tragedy for one parent when she was crushed to death in a stampede at the gates of the University of Johannesburg’s Bunting Road campus.

The woman has not yet been identified.

“One female died, 17 have been treated for minor injuries, and will be taken to hospital,” said emergency services spokesperson Nana Radebe.

“We received a call at about 7.30am this morning. It is alleged that the stampede occurred just after they opened the gate,” she said.

A disaster bus was also on the scene helping the injured, three of whom were in a serious, but stable condition.

University spokesperson Herman Esterhuizen said further details would be released at a press conference at the university at 10am.

Registrar Marie Muller told eNews channel that the incident happened as students queued for last-minute applications to the tertiary institution.

It was turning away people still outside the campus and trying to get in on Tuesday morning.

Muller confirmed that the university had since closed the gates and would not be accepting any more late applications, saying that there were at most 600 additional spots for the 6 000 applicants who have been queuing throughout the night at the Bunting Road campus.

Late applications are an annual phenomenon as thousands of matric graduates flock to universities in the hopes of gaining acceptance to study further.

One prospective student said, “We rushed the gate because we need to register — we need education. People ran over each other and were jumping over fences.”

UJ is one of the few universities that take last-minute applications after the January release of matric results, when matriculants may find that they achieved an unexpected university entrance pass.

Matrics were alerted to the late application opportunity through the university’s email and SMS campaign.

The Star newspaper reported on Tuesday morning that there were only 11 000 first-year undergraduate places at UJ and the university has already provisionally accepted 17 000, subject to their matric results and space. As many as 5 000 applications were accepted on Monday alone.

A traumatised Wilson Matiba was present when the stampede occurred.

“Things got out of hand. We rushed the gates and people fell. We couldn’t stop,” said Matiba, who is trying to enrol for a BSc degree in zoology.

Matiba said prospective students were desperate and felt left without any alternative other than storming the entrance.

“We need education. We need to register. We needed to get inside,” he said.

Concerned parents remained outside the entrance after the incident, continuing their efforts to get their children enrolled at university.

“They treat these kids like pigs. How can we trust them to give them an education?” said Patricia Moshoeng, whose son, Caleb, had been queuing outside the entrance since 4pm on Monday.

“His phone is now off and I can’t find him,” Moshoeng added.