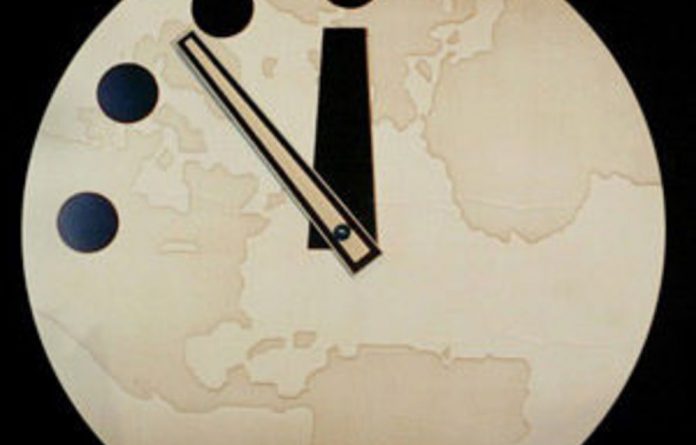 The symbolic clock now stands at five minutes to midnight, the scientists said, because of a collective failure to stop the spread of nuclear weapons, act on climate change or find safe and sustainable sources of energy as exemplified by the Fukushima nuclear disaster.

The rare bright points the scientists noted were the Arab Spring and movement in Russia for greater democracy.

The clock, maintained by the Bulletin of Atomic Scientists, has been gauging our proximity to global disaster since 1947, using the potent image of a clock counting down the minutes to destruction. Until Tuesday afternoon, the clock had been set at six minutes to midnight.

“It is five minutes to midnight,” the scientists said. “Two years ago it appeared that world leaders might address the truly global threats we face. In many cases, that trend has not continued or been reversed.”

The Bulletin was founded by the scientists who helped build America’s atomic bomb and the primary focus of their concerns remains the danger of a nuclear conflagration.

But a number of the scientists who took part in the deliberations said they were also dismayed by a growing trend to disregard science.

‘Ambiguity’
“A cross-cutting issue through the entire discussion is the worrisome trend to reject or diminish the significance of what science says is the characteristic of a problem,” said Robert Socolow of Princeton’s Environmental Institute. “There is a general judgement among us that we need the political leadership to affirm the primacy of science.”

The scientists also noted how Republicans seeking the GOP nomination were trying to outdo each other in denying climate science.

Their greatest disappointment was the failure of international leaders to rid the world of nuclear weapons, exemplified by what they called “ambiguity about Iran’s nuclear power program”. Even when Russia and America ratified a new nuclear treaty in 2010, there were still nearly 20 000 nuclear weapons in the world.

They warned that the Fukushima meltdown once more exposed the dangers of nuclear power — not just because of technology but because of management failures.

After Fukushima, governments also need to think far more carefully about siting nuclear power plants. The stricken plant was too close to the coast and in a seismically active region.

“A major question needs to be addressed: “How can complex systems like nuclear power stations be made less susceptible to accidents and errors in judgment,” the scientists said in their statement.

Looking for alternatives
On climate change, scientists warned the global community may be reaching a point of no-return unless there is a push to begin building alternatives to carbon-heavy technologies within the next five years.

The Fukushima disaster, the painfully slow pace of the UN’s international climate negotiations and the growing hostility to science punctured the optimism of earlier pronouncements from the Bulletin scientists.

In 2010, the scientists set the clock back from five minutes to six minutes to midnight, amid hopes that the international community was prepared to act on nuclear weapons and climate change.

“We all had a sense when we moved the clock in 2010 that we might have a breakthrough,” said Kennette Benedict, executive director of the bulletin. “Today there was a real sense that we really need new thinking and we don’t have new thinking.”

Twenty years ago, with the break-up of the Soviet Union bringing the end of the Cold war, the scientists moved the clock back father than ever to 17 minutes to midnight.

But the scientists have also set the clock as close as two minutes to midnight in 1953, after America tested its first hydrogen device. —