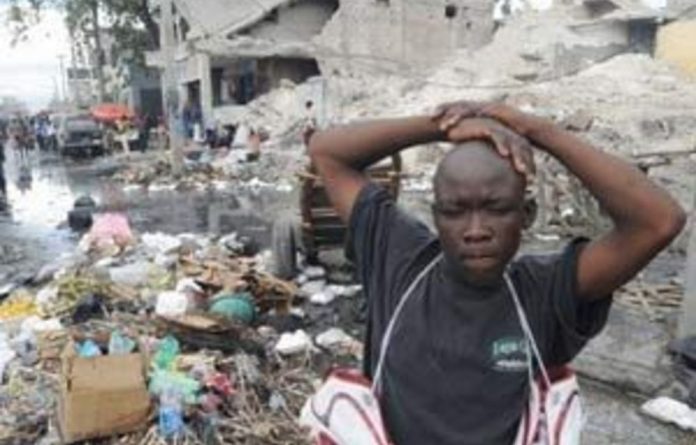 In the Port-au-Prince suburb of Petionville, some 2 500 people subsist in a crowded public park near open ditches flowing with human waste, a grim scene frozen in time two years after Haiti’s earthquake disaster.

Valerie Loiseau (28) recalled the fateful day — January 12 2010 — when she lost everything and her life changed forever.

“I got here at 6:00pm, a few moments after the earthquake, with my children, my daughter, a few months old, in my arms and nothing else.”

Two years after the 7.0-magnitude quake visited near-biblical destruction on Haiti, killing between 200 000 and 300 000 people, she is still in the camp with her daughter Kelida, now three, playing at her feet.

Older children, half-clothed and barefoot, chase a worn football across a filthy clearing, past puddles of putrid waste water.

Some 15% of Haiti’s entire population of almost 10-million were either killed or displaced by the quake. Almost 520 000 survivors still live under tarpaulin in 800 camps dotted around the crowded Caribbean capital.

Shocked in the immediate aftermath of one of the deadliest disasters of modern times, the international community promised billions of dollars of aid money to “build back better”.

Pipe dream
Decentralisation — away from the slum-infested, sprawling capital of 3-million — was the buzzword in a plan to be implemented under the watchful eye of former US president Bill Clinton.

This grandiose vision now appears to have been a pipe dream.

Less than half the $4.59-billion pledged has been received and disbursed, and the coffers of the aid agencies are also drying up.

While Haitian officials voice fears that the country is turning into a republic run by non-governmental organisations (NGOs), they also admit they have no choice.

“We are not yet ready to replace the NGOs,” Haiti’s minister of planning and external coordination minister Jude Herve Day said, admitting that the outside groups bring services the state is not able to provide.

More than 50% of the quake rubble has been cleared but little has been erected in its place and the pace of reconstruction is still painfully slow.

Most of the hundreds of thousands of people who fled Port-au-Prince after the quake have since returned to the overcrowded capital, desperate for work and food in a country still lacking another effective pole to attract labour.

Housing programme
Michel Martelly, a former carnival entertainer and pop singer, was sworn in as the new president in May, riding a populist wave and promising to bring the change that the country so badly needs.

But faced with a Parliament dominated by his political opponents, it took him five months to even get a prime minister appointed.

Martelly has recently tried to nurture smaller, community-based projects such as a flagship housing programme aimed at taking residents out of six camps and relocating them to 16 neighbourhoods.

Alongside it, he has created the Carmen project, whereby approved home owners receive funds to repair their houses under the supervision of certified engineers.

“You have a vision of where the government wants to go and that’s just critical,” he said. “Second you’ve got leadership to take that vision and communicate it to people and inspire people and third you have political will to implement the vision.”

The problems facing Haiti are vast, if not insurmountable, in the short term.

Cholera epidemic
Hundreds of thousands who lost homes in the quake are still in a legal quagmire as there was no paperwork to prove their small holdings.

“What we are looking at in Haiti today is not just recovery from the earthquake. It’s not just dealing with a cholera epidemic,” said Nigel Fisher, the UN’s chief humanitarian officer in Haiti.

“Those came on top of a country which was structurally broken.”

Experts say the key to Haiti’s long term sustainability lies in rebuilding its agricultural sector. But the one-time exporter now has to import rice for 80% of its population and soil fertility is so poor that most crops can no longer be supported.

The World Bank in December approved $50-million for new agricultural projects, investing in key Haitian products such as mangoes, coffee and cocoa that are garnering increased overseas attention.

Loiseau, like most of the quake refugees, needs a miracle. “My hope is God, not the leaders of this country,” she said, staring at the passing cars with traumatised indifference. — AFP