Poachers skill up to slip ivory, rhino horns out of SA 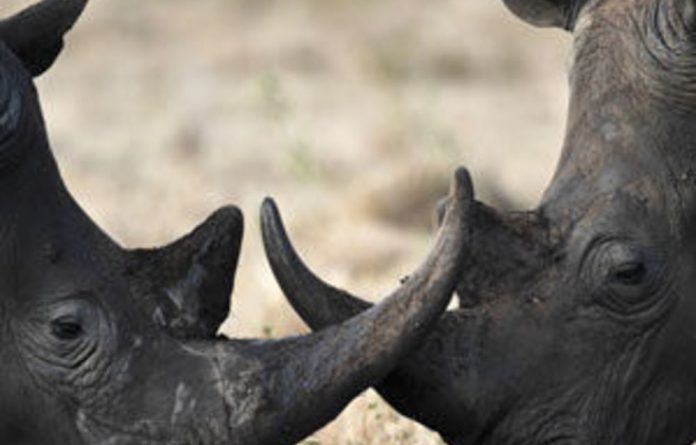 “There is increasing evidence overall that in the rhino horn and ivory trade, there is greater involvement of criminal syndicates, and greater organisation,” said David Newton, the East/Southern Africa regional director for wildlife trade monitoring network Traffic.

Cape Town has emerged as the port from which at least two large shipments of ivory and rhino horn were shipped in recent months. This week authorities in Malaysia seized a 500kg consignment of elephant tusks shipped from Cape Town, leading the International Fund for Animal Welfare (IFAW) this week to call for a complete ban on the ivory trade.

In November, Hong Kong customs officials intercepted a shipment of 33 rhino horns and more than 800 pieces of carved ivory that had been shipped in a container from Cape Town. Experts believe the shipment was destined for China.

Local transit routes
Illegal ivory seized by South African officials has tended to consist of small shipments of carved and semi-processed ivory, in the form of jewellery or figurines. This latest shipment to Malaysia, which consisted of tusks, would appear to be a major departure from that practice.

Paul Gildenhuys, programme manager of the biodiversity crime unit at the conservancy organisation Cape Nature, confirmed the trend. “Lately we’re finding more tusks,” he said, adding that an increasing number of arrests for the possession of illegal ivory had been made in the Western Cape over the past three years.

However, he said that although the port of Cape Town had been implicated in recent caches of illegal animal products, this did not necessarily mean that it was becoming a hub for syndicates, who are likely to use “whatever infrastructure they can” to transport illegal products.

“Cape Town might be one of the ports that they’re using but they’re using others as well,” he said, pointing out that authorities have also intercepted wildlife products at Johannesburg’s OR Tambo airport.

Traffic said smugglers appear to have shifted away from air transport to using sea freight instead. “In early 2011, three of the large scale ivory seizures were at airports, but later in the year most were found in sea freight,” the organisation said. Traffic also called on the South African Port Authorities to invest in scanning equipment and to “up their game” in monitoring export cargo.

Gildenhuys, who works closely with police to apprehend ivory traders, said officials are doing what they can to stop the trade but conceded that “obviously, the more equipment you’ve got the better chance you’ve got of detection”.

Stronger regulation
IFAW’s Southern Africa director Jason Bell-Leask said conservation groups have for years expressed concerns about the ability of governments to regulate the ivory trade. He said that given the large quantities being traded, it is obvious that this ivory is coming from elephants that have been poached.

Bell-Leask believes stricter monitoring of the wildlife trade is needed. “There needs to be a heightened focus for enforcement authorities, customs in particular,” he said.

“We’re getting back to a point here [where] an ivory trade ban makes sense,” he said.

There has been an international ban on trade in ivory since 1990 but Cites — the Convention on International Trade in Endangered Species of Wild Fauna and Flora — has made two exceptions to this rule, allowing a handful of countries to enact once-off trades of stockpiled ivory in 1999 and 2008. South Africa was among the countries that were allowed to sell off their stockpiled ivory in the last round of trades.

Ivory that has been legally traded under the Cites convention in the past comes from elephants that have died of natural causes or been killed as part of wildlife management practices: culling, in other words.

Tanzania, Kenya and Mozambique are known elephant poaching hotspots and the key markets for export are in the Far East, specifically China and, to a lesser extent, Thailand.

Supply and demand
But some dispute the idea that an outright ban would help drive down the trade in illegal ivory. “A trade ban is not always effective at stopping things,” said Newton. “In effect there is [already] an ivory ban and yet there’s been an increase in elephant poaching and a rise in the confiscation of ivory.”

He said that there were many alternative solutions that could be effective at cutting the demand for ivory and rhino products, including greater consumer awareness about the effect uncontrolled trade has on wildlife populations, improved policing and better regulation in the consumer countries.